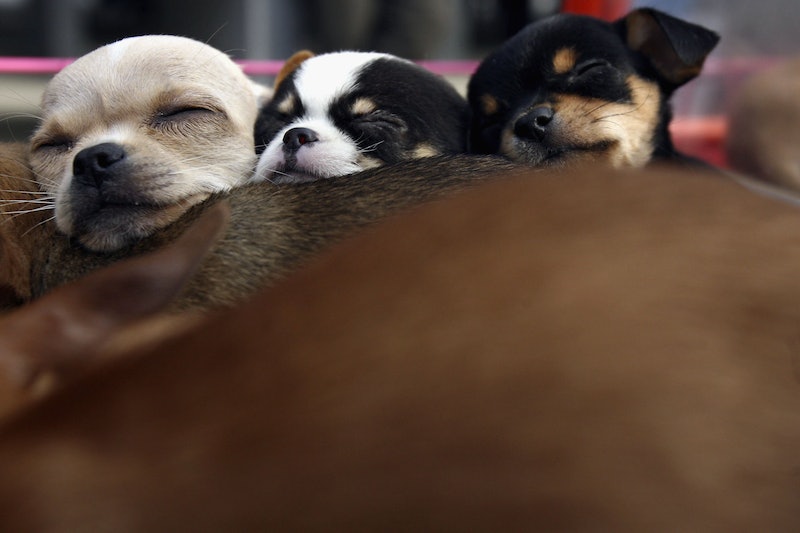 Is anything better than pop psychology? Not in my shady-online-university textbook. Dream interpretation is one of the best ways to dabble in amateur Jungian theory (not to mention potentially understand your own mind better).

Here are some of the most common dream symbols, some of which are especially relevant to women. Get your metaphorical couch out: you're gonna to need to lie down for this.

Here’s a rundown of teeth dreams , according to the ‘definitive’ dream symbol site Dream Moods:

Teeth Falling Out: "Signifies a lack of self-confidence and embarrassment. You are afraid that others will know of your short-comings. If you acted calmly in your dream, then it may point to how can make the best out of any situation."

Teeth Rotting/Decaying: "You may have said something that you shouldn’t have. You may have uttered some false or foul words and those words are coming back to haunt you."

"To see hair in your dream signifies sexual virility, seduction, sensuality, vanity, and health," Dream Moods coos. "If your hair is knotted or tangled, then it is symbolic of uncertainty and confusion in your life."

Cutting Hair: "Loss of strength" (Samson, anyone?) or "you may be reshaping your thinking or ambitions and eliminating unwanted thoughts/habits." Or, you just broke up with your boyfriend.

Bugs in Hair: "Something is weighing on your mind that you are confused about. Perhaps you are making a big deal out of a minor matter. Alternatively, the dream refers to concerns over your public image."

Dreams about driving are some of the most common, and here’s what they might mean, according to Dream Moods:

Trouble Steering/Seeing Road: Real shocker here: “you do not know where you are headed in life and what you really want to do with yourself.”

You’re The Passenger: “You are not in control of your life and following the goals of others instead of your own. If you are driving from the passenger side of a car, then it suggests that you are trying to gain control of the path that your life is taking.”

This one is obviously nothing to be ashamed of . Dream Moods breaks it down:

Naked and Mortified: "You may be hiding something and are afraid that others can see right through you… Such anxieties are elevated especially in situations where you are trying to impress others. Perhaps you are in a new work environment or in a new relationship."

You’re Naked; No One Notices: So, you’re having an emperor’s-new-clothes-moment. This "implies that your fears are unfounded; no one will notice except you. You may be magnifying the situation and making an issue of nothing."

Naked and Unashamed: "Symbolizes your unrestricted freedom. You have nothing to hide and are proud of who you are. The dream is about a new sense of honesty, openness, and a carefree nature." Miley Cyrus haters be damned.

I’ve only had one flying dream in my life that I can remember, but man, was it awesome. According to Psychotherapist Jeffrey Sumber, flying dreams represent "freedom, momentum, or a lack thereof."

Apparently, if I want more flying dreams, I might want to consider thinking like a man. In a sad comment on the state of women's self esteem, Sumber says dudes believe they can fly more often.

"Often times, men in today’s world negotiate issues regarding freedom. There is great pressure to perform at work, at home, in the bedroom, financially, athletically, socially, and more and more, emotionally," Sumber mansplained to the Huffington Post. "Thus, it has become fairly common for many males to confront their feelings about this pressure as well as their relationship to the underlying desire to be free, by working it out in flying dreams."

Is he serious? We women negotiate all of those things! (And then some.) I’d pop-theorize it’s realizing we lack certain freedoms that keeps many of us women from flying as often as we should.

Hopefully for you, your favorite wish fulfillment dream features sex — or at least the promise of it. So what does dreaming about sexy times mean, aside from the obvious?

"To dream about sex refers to the integration and merging of contrasting aspects of yourself. It represents psychological completion. You need to be more receptive and incorporate aspects of your dream sex partner into your own character," Dream Moods advises. "Consider the nature of the love-making. Was it passionate? Was it slow? Was it wild? The sex act parallels aspects of yourself that you wish to express."

Though, apparently, "a more direct interpretation of the dream may be your libido’s way of telling you that it has been too long since you have had sex."

Oral Sex: Not surprisingly, oral sex is all about a "willingness to give or receive pleasure/joy. It is symbolic of your creative energy and reaffirms that you are headed in the right direction in life." (Tell us something Beyoncé doesn’t already know.)

Orgasms: According to Dream Moods, the big-o "represents an exciting end to something. What have you just completed in your life?"

"Alternatively, the dream means that you are not getting enough sex. You need to relieve some of your sexual tensions." Yup, just like guys and wet dreams, it’s gotta come out some way. We suggest being conscious.

Obviously, it's just like regular sex, except for many people, more complicated:

The I’m-Having-Gay Sex-But-I’m-Not-Gay (Wait, Am I?) Dream: "Represents a union with aspects of yourself. It is symbolic of self-love, self-acceptance, and compassion. If you are uncomfortable with homosexuality in your dream, then it suggests some fears or anxieties femininity [or] you may be experiencing some insecurity in your relations with the opposite sex." Because maybe you’d like to have sex with them.

The Is My Man Gay? Dream: "Represents your anxieties and fears that he won’t like you back. By seeing him as gay, then it would be easier for you to dismiss your feelings for him because you have no chance with him. On a side note, it is common for expectant fathers to have dreams of homosexual encounters." Totally normal guys.

The I’m-Gay-in-Real-Life-AND-Having-Gay-Sex Dream: "Simply a reflection of your own self." Pop-psychology FTW.

Whoops, you had so much dream sex that now you’re dream-pregnant.

You’re Pregnant and Happy: "Symbolizes an aspect of yourself or some aspect of your personal life that is growing and developing. You may not be ready to talk about it or act on it. Being pregnant in your dream may also represent the birth of a new idea, direction, project or goal."

Pregnant and Baby is Dying Inside You: Yikes, this is a thing? "To dream that you are pregnant with the baby dying inside of you suggests that a project you had put a lot of effort into is falling apart and slowly deteriorating. Nothing is working out the way you had anticipated." Um, yeah, because there’s a friggin’ dream-baby dying in you.

Having an Abortion: "To dream that you have an abortion suggests that you are hindering and blocking your own growth. You may be hesitant in pursuing a new direction in your life due to fear, pressure, personal conflict or moral obligation." Not at all problematic.

Dream Moods concedes that of course an abortion dream “may also be a reflection of your own real-life abortion and thus serves as a way of healing from the trauma and working towards self-acceptance.”

Having an Illegal Abortion: “You are desperate to keep things exactly the same. If the abortion results in death, then it means that your approach to a problem is all wrong.” Or, that you live in one of these states.

First comes baby, then comes marriage. But according to Dream Moods, a marriage dream doesn’t necessarily mean you want to get hitched. Instead, it could mean you're "undergoing an important developmental phase in your life. The dream may also represent the unification of formerly separate or opposite aspects of yourself. In particular, it is the union of masculine or feminine aspects of yourself."

Oddly, Dream Moods adds that dreaming of a proposal "suggests that some situation will take a turn for the worse." Probably your sex life.

One favorite pop-psychology theory is that most people don’t tend to actually die in their dreams because it would mean suspending their ego. But apparently, plenty of people don't have that issue with follow-through and totally attend their own funeral.

"To dream that you die in your dream symbolizes inner changes, transformation, self-discovery and positive development that is happening within you or your life. You are undergoing a transitional phase and are becoming more enlightened or spiritual. Although such a dream may bring about feelings of fear and anxiety, it is no cause for alarm as it is often considered a positive symbol."