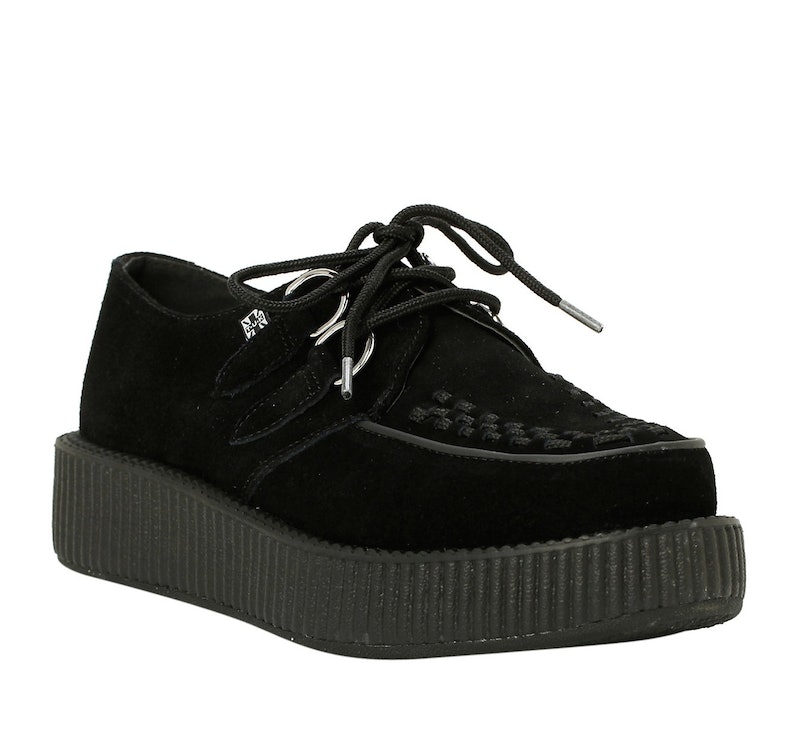 One of the few perks of being an adult is being in charge of your own wardrobe. Yes, you have to file taxes (brb, crying real tears), but you can also wear whatever the heck you want, no matter how weird it is. When you were a kid, though? There were a lot of shoes your parents wouldn't let you wear in the '90s.

Whether it was form (I think we can safely agree that the ridiculously popular platform sneakers were egregiously ugly) or function (lbr, jelly sandals hurt) — or even cost, there were a lot of things standing between you and whatever The Spice Girls were wearing in their latest video... and forget the high-fashion kicks Stella Tennant and co were rocking. You might have seen commercials for those LA Gear light-up sneaks and the flash-in-the-pan moonshoes while you were catching up on Legends of the Hidden Temple, but that didn't mean you were able to convince your parents to shell out the bucks to buy them for you.

Of course, there were some '90s shoe trends that parents flocked to — my mom was all about the embroidered clogs, Converse high-tops, sturdy boots, and Mary Jane sneakers — but the truth of the matter remains, there were generally a lot more shoes they had objections to than shoes they approved of.

Some parents disliked the popular light-up sneaks because they were distracting. Others saw them as a nifty way to help ensure their child was not hit by a car. To each their own!

OK, everyone had a pair of jelly sandals: They were affordable, ubiquitous, and generally unobjectionable. That said, my mom had to eventually ban me from wearing my pair, because of the horrible blisters they wrought.

Platforms sneakers were absolutely boss in the '90s — even so, my mom was very reluctant to buy them for me, since they were wildly impractical. I think I eventually convinced her, but only because we were able to find a slightly less ostentatious version at the outlet mall.

My mom just thought these were straight-up stupid. She certainly didn't suffer fools, and of course, in hindsight she was 100 percent right.

Despite having no interest in athletics, I remember being entranced by allure of the commercials for these basketball shoes. Three guesses as to what my mom said when I begged for a pair of my own, though. (They were expensive and their function was futile.)

This one depends on how strict your parents were, but I definitely know some who were against the steel-toed Doc Martens.

Creepers may be having a major moment right now, thanks to Rihanna — but back in the day, some parents turned against them for their Hot Topic-y goth-ish vibe.

Maybe if you struck up a deal with your grandparents, and pulled straight-As for a semester, you could score a pair. If you were lucky.

Your parents were probably averse to this look, likely citing it as "too grown-up."

Thanks to Clueless, you probably begged your mom for high-heeled Mary Janes at some point or the other. (I don't know about you, but I wasn't allowed to wear high-heels until I was 14).

More like this
Netflix Reveals First Look At Wednesday In The 'Addams Family' Spinoff Series
By Bustle Editors
Kenan & Kel Just Reunited At The 2022 Emmys & Twitter Is Overjoyed
By Grace Wehniainen
The Queen Will Likely Be Buried With These Special Jewels
By Darshita Goyal
Prefer Alcohol-Free Perfumes? Water-Based Fragrances Are On The Rise
By Audrey Noble
Get Even More From Bustle — Sign Up For The Newsletter