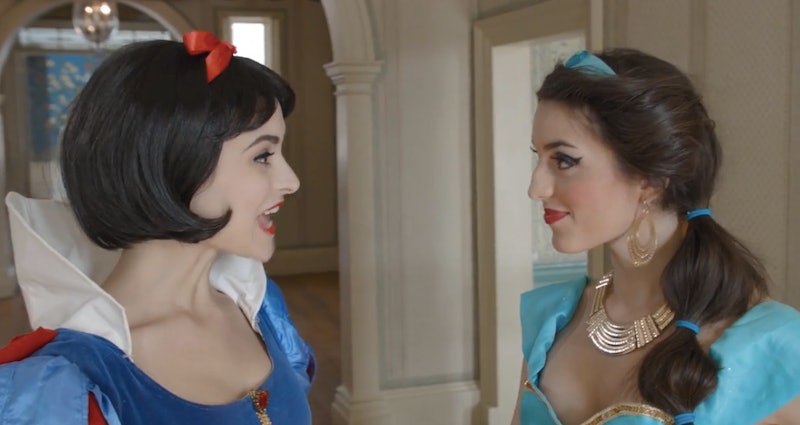 If you've ever wanted a musical number that is the antithesis of Snow White's "Someday My Prince Will Come," wait no longer. AVbyte, which creates YouTube musicals, is poking fun at the flaws in the "love stories" of many Disney princesses with a new video that questions the need for a man at all. The video stars Frozen 's Elsa as she asks the central question "Why does every princess need to have a prince?" Amen, Elsa. I've been wondering that for a long time. And indeed, Elsa's story has been praised for the fact that the central relationship in the film isn't romantic, but between two sisters. So she might be the perfect person to encourage all those other Disney princesses to snap out of the daydream and embrace independence.

The video shows what it would look like if Belle, Jasmin, Ariel, Snow White, Sleeping Beauty, and Cinderella all decided that they didn't need their princes, but wanted to chase their dreams instead. And while I definitely don't think being in a relationship and chasing your dreams are mutually exclusive, in Disney-universe they somehow seem to be. So if you need an antidote to all the sappy love-talk of Valentine's Day, look no further. Because there's something wonderfully cathartic about the women we were all supposed to look up to as children actually doing something worth admiring — namely, taking control of their own lives.