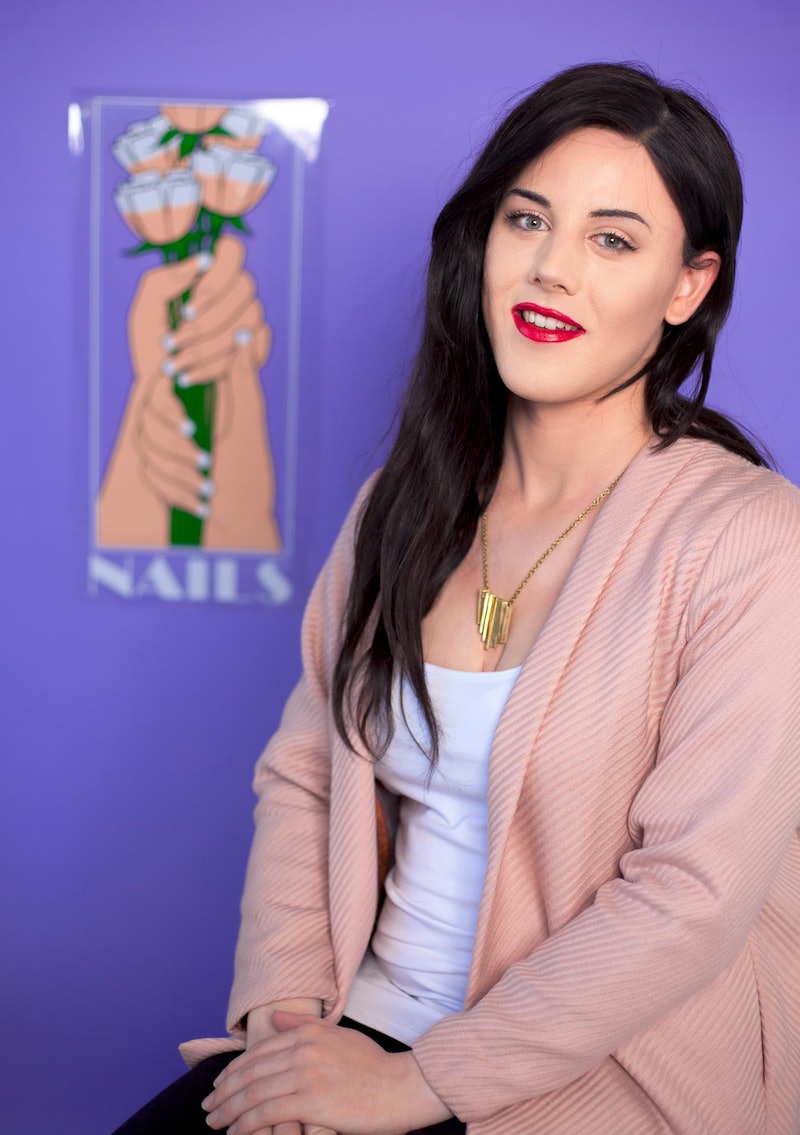 Whether through a conversation about Beyoncé or an in-depth discussion about trans rights, nail artist Charlie Craggs regularly teaches people about transgender identities by introducing them to a transgender person: herself. With her one-stop pop-up nail shop in London, England, Craggs invites anyone and everyone to get a manicure and, in the process, learn that transgender people are no different to anybody else. Instead of being overly verbose or using technical lexicon, Craggs chooses to connect to those around her in an extremely personal way: Through a simple conversation.

Using the profits brought in through her company, Nail Transphobia, Craggs is funding defense classes for transgender woman that she hopes to begin running in 2016. There are two sides to her activism: Education, but equally important, defense.

As Craggs candidly explains to me in an email interview, "I’m all for sitting down with someone and educating them while I paint their nails, but honey when you’re being attacked (which is very much the reality of everyday life for trans women) there’s no time to ask your attacker if they want a top coat. Bitch, you need to know how to protect yourself! It’s can literally be a case of life or death."

So far, Nail Transphobia has been smooth sailing — something I would personally attribute to Craggs' winning attitude and patience with the public. But she attributes her success to the LGBTQIA+ events she attends as well as the crowd already being "halfway there" on the spectrum of acceptance for simply agreeing to hear her out.

Speaking to me about the worst experiences she's had as an activist, the perpetually positive Miss Craggs struggles to find any. "Sometimes people will use words like 'tranny' or ask things like 'have you had the surgery yet?' But that’s fine because this is what Nail Transphobia is all about. This is my chance to tell them, as their new friend, that this isn’t cool," Craggs tells me. And she's hopeful that they'll spread the message. "Like if their boyfriend uses the word 'tranny' they will correct them," she says. "Or if they see a friend refer to Caitlyn as Bruce on Facebook they will correct them and so on; ripples make waves."

The subsequent attention that Nail Transphobia and Charlie Craggs have received — including being featured in a feminist film by Selfridges, a major UK department store, and placing at number 40 on The Independent 's Rainbow List 2015, ranking her among the "most influential lesbian, gay, bisexual, transgender, and intersex people in Britain" — is well deserved. Craggs faced aggression on the streets of her West London council estate on the daily and was scared to leave her home for fear of abuse, but instead of crumbling, this woman decided to literally and figuratively nail transphobia.

And fabulous she is. Craggs' charm doesn't come solely from her activism, but her humble nature and her trust in the inherent goodness of humans. With attacks on transgender people at an all-time high, as reported by Time Magazine, even existing openly as a transgender woman is something to be admired.

If you want to support Craggs' admirable work, check out her website and invest in some super cute nail decals to get your very own Nail Transphobia manicure. Just make sure to hashtag #nailtransphobia on your Instagram to spread the good word.

More like this
An Honest Review of MeUndies Boxers, According To A Non-Binary Person
By Megan Lasher
The 19 Best Tweets & Memes About Bisexual Awareness Week
By Lexi Inks
Pro Footballer Zander Murray Is "Blown Away" By Support After Coming Out
By Sam Ramsden
Androgynous Formal Wear That Will Make You Feel *So* Fancy
By Megan Lasher
Get Even More From Bustle — Sign Up For The Newsletter