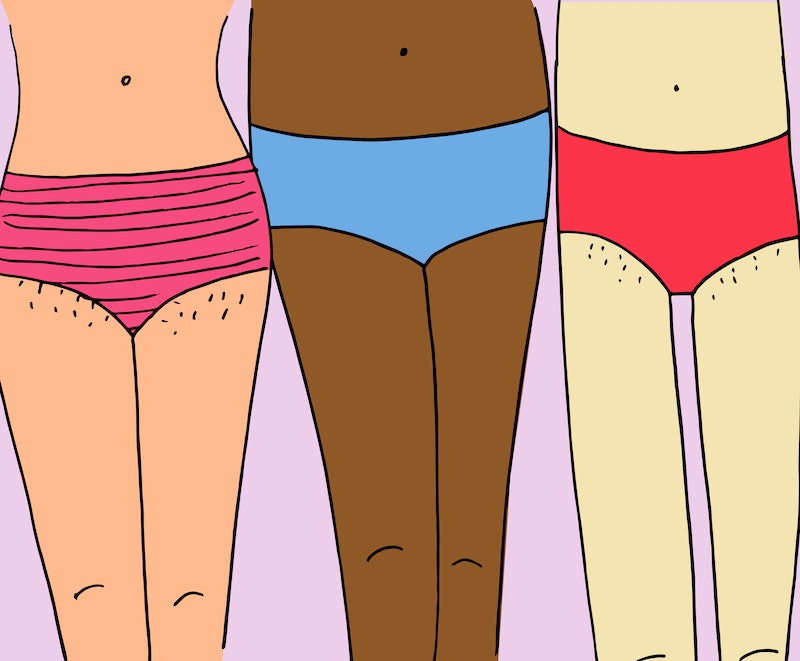 Like most insecurities and aesthetic-related hang-ups, I didn't know my female body hair was a problem until someone told me it was. A furry-legged, unibrowed prepubescent teen, I went to sixth grade gym class in shorts one morning, rather than my usual sweatpants. It was there that a friend told me, "No offense, but you really need to take care of that," pointing towards my legs with a look that was equal parts disgust and cockiness stemming from her hair-free superiority. It was then that I learned that whenever someone starts a sentence with "no offense," what they're about to say will likely be incredibly offensive.

This wouldn't be the last time I heard some sh*t about my leg hair, or my pit hair, or my bushy brows, or my pubes. The following two years of middle school would be very much the same: Misguided lesson atop misguided lesson as to how to maintain the hair on my body. From ~horror stories~ about men who ran for the hills when they discovered that the women they wanted to get into bed with were unshaven, to concerns about the hygiene (or lack thereof) of rocking pit hair as a girl, natural body hair became a thing to be eradicated: A thing to fear and "take care of" before letting anyone see your bare skin.

Middle school was full of questionable life lessons. So here are nine weird things most of us were likely taught about body hair — and that we can hopefully begin to deconstruct as we open our minds a little.

1. Girls Have To Shave

This was (and often still seems to be) Rule. No 1 of body hair maintenance: Boys don't have to shave, but girls do. The end. Adios amigos.

Personally, I heard this from friends, teachers, and my mom (at least as it pertained to pit and leg hair) alike. For a lot of us, the idea that girls did or didn't have to do certain things in order to be acceptable members of society permeated everything — the way we dressed, the way we interacted with potential romantic interests, the way we discussed or thought about sexuality, and the way we wore our makeup. Shaving was no different.

The truth is, there is no set of rules and regulations for what girls should or shouldn't do. Everything is subjective, every person unique, and every girl entitled to her own body hair rituals.

So here's the thing: If body hair really was unhygienic, this would be true for all bodies. We cannot simply pick and choose which gender is allowed to sport hairy pits, and then blame concern for another gender's wellbeing as justification for spewing double standards.

As women's rights activist and female body hair supporter Xiao Meili told The New York Times in 2015, "Men have more freedom in terms of what to do with their bodies. I’m not calling on everybody to grow underarm hair. I’m just saying if some people don’t want to shave, the rest of us should not think their underarm hair is disgusting, unhygienic, uncivil or not feminine enough.”

Yet in middle school, that's exactly what many of us ladies were taught: Not shaving meant being dirty. And we didn't want to be dirty, now did we? Boys could be boys, and rock their hairy pubescent pits while running around in mud puddles. We, however, were not entitled to the same.

Middle school was the time when most of us likely started learning a thing or two about sex. I grew up in a relatively conservative town, where most kids didn't actually start having sex until their later teens or early 20s. But that doesn't mean nobody talked about it before then. If anything, sex was probably the main topic of conversation within junior high halls.

We didn't know much, but we did know that body hair was "not what boys wanted to see," particularly as it applied to the vagina. Or at least that was the message we heard from older sisters and seemingly grownup high schoolers on the late bus.

Now, the fact that we were conditioned to believe that our aesthetic choices must be primarily made with men in mind was effed up to begin with. Add to all that the notion that all men prefer shaven vaginas, and we managed to simultaneously reduce an entire gender to a singularly-minded entity. What a double whammy of lies.

4. You Can't Show Off Your Legs If They're Hairy

I remember my mom and big brother showing flat-out concern if ever I forgot to shave my legs and wore shorts or a bathing suit out in public. Big bro would tease me endlessly, while mama would remind me not to be lazy about looking after my body. I can't even blame them, TBH. Both were raised to adhere to antiquated gender roles, and neither ever really ventured into environments where people might think differently. I feel lucky that I did.

After that encounter in sixth grade, I went home after school and immidiately shaved off all my leg hair with my mom's old razor. It was blunt and I cut my legs a bunch, but at least it resulted in blissful hairlessness, right? Afterwards, hair removal became a must-do: Something I felt legitimate panic over whenever I realized I'd missed a spot.

The thing is, there are enough things to worry about in this world of far more substance than the state of the hair on our limbs. I hope someday we teach girls that how much or how little leg hair they have is pretty inconsequential in the grand scheme of things.

Want more radical body positivity? Check out the podcast below, and be sure to subscribe to The BodCast for more self-love inspo!

5. Shaving For A First Date Is Essential

Much like we were taught that boys don't like pubes, and that the world must of course revolve around boys' needs, many of us learned that there was no better way to impress a guy than through totally shaved, glistening skin. In my middle school, that skin should also be shining orange with the essence of tanning beds.

But first dates are a chance to collect first impressions as to how kind or unkind someone is. I wish someone had told me instead that if a date — regardless of their gender — is ever insulted, disgusted, or shocked by my body hair, they're actually not worth much of my time. I wish we'd learned that dates who are worth it probably couldn't care less about the state of our underarms.

6. Ladies Should Never Have Facial Hair

More gut-wrenching than the time my sixth grade buddy implied that my hairy legs were a problem was the experience of developing upper lip hair around eighth grade. It was then that my Polycystic Ovarian Syndrome symptoms, including an abundance of facial and body hair, started manifesting. My mom took my to the gynecologist pretty immidiately — as soon as I told her that someone at school had made fun of both my mustache and my unibrow.

By this point, I knew that girls were not supposed to have hair. Yet all of a sudden it was on my face. I felt embarrassed. I felt unhygienic. I questioned my femininity.

Even after I later began deconstructing everything I'd learned about body hair, facial hair remained a sensitive topic. Thanks to women like body image activist Harnaam Kaur, however, I've realized that there are a whole myriad of reasons women might have facial hair — PCOS and heightened levels of testosterone included, as well as the simple reality that every human in this world has body hair (even if you can't see it).

But regardless of the reason, it's always OK. It doesn't have to be shaved if you don't want it to be — something Kaur herself has proved. And it should never detract from how ladylike or unladylike you feel. Preferences are cool, of course. But suggested rules for what constitutes a lady? As Arya Stark will tell you, those are not quite as cool.

7. Body Hair Is Not Feminine

Oh, the F-word. There are so many things we learned were feminine in middle school (lip gloss, mini purses, raccoon eyeliner, tanning oils, mani pedis, being attracted to boys), and so many things we learned were unfeminine (very physical sports, not wearing makeup, eschewing dresses, being attracted to girls). Shaving versus not shaving was the crème de la crème of it all.

The truth is that femininity is not universally definable. It doesn't look one way. It can never be represented by one practice. It's a spectrum — a word that women and femme people get to define for themselves and themselves alone. Our body hair maintenance choices, like all our body-related choices, really should be our own to make based on what makes us feel best.

8. It's Just Different For Guys

Yes, yes. Dudes can have hair on their faces, their pits, their chests, their genitalia, their butt cracks, and their limbs, but girls... can't?

Much logic. Such gender norms.

"Gross" was a word used to describe just about anything people were remotely confused by in my right wing-bred middle school: Parents, the burgeoning emo trend, same-sex couples, folk music, "alternative" kids, girls who were virgins, girls who weren't virgins. It was exhausting. And it was no different with body hair.

Suffice it to say, I don't envy middle school girls in the least. I sometimes catch myself thinking, "Things were so carefree then: No responsibilities, no nine-to-five, no rent, no student loans" — until I remember how very-not-carefree they actually were.

So much of middle school, at least for me, was a period of discovery for all the things supposedly wrong with my body. And so much of adulthood has subsequently been an un-learning process.

More like this
Berriez Founder Emma Zack On Her Size Inclusive NYFW Show
By Dominique Norman
Jennifer Lopez's ‘90s Updo Hairstyle Takes Me Back To Middle School
By Olivia Rose Ferreiro
Tilda Swinton’s Neon Yellow Hair Is More Than A Style Statement
By Justine Knight
15 Offensive AF Jokes In 'Friends' That Really Aren't OK
By Tolly Wright, Bustle Editors and Meguire Hennes
Get Even More From Bustle — Sign Up For The Newsletter