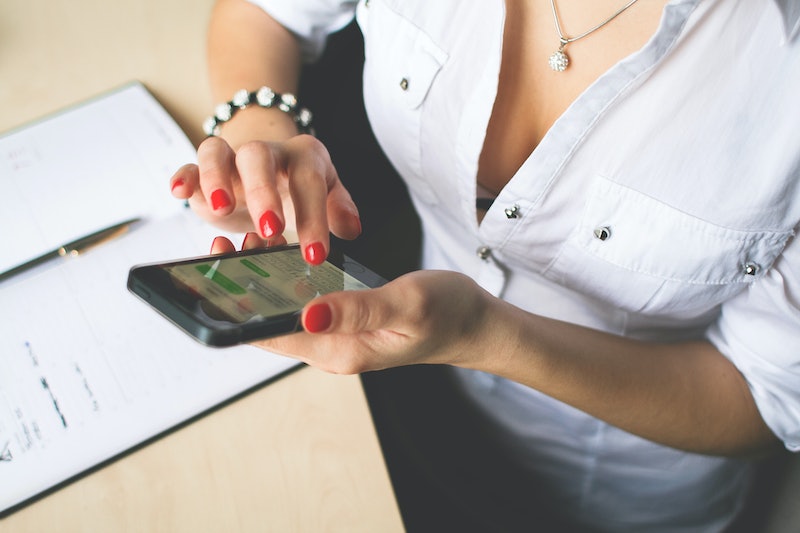 Just saying “I love you” or “I'm thinking about you” on a daily basis can go a long way towards making your mate feel appreciated. And hey, guess what? If it’s difficult for you to remember to do that — and I say this without a trace of irony — there’s an app for that. It’s called Romantimatic. But is it a good idea, or is it a terrible one?

Here’s how it works: Romantimatic allows users to schedule reminders prompting them to text their significant others throughout the day. It comes loaded with a number of pre-set messages, like “I love you,” all ready to be sent off into the textual ether; it also allows you to write and edit your own messages. You can set the app either to automatically send out these texts at a frequency of your choosing, or simply to remind you that now might be a good time to shoot your schnookywookybear an affectionate note.

It’s been called both a positive and a sign of the impending apocalypse (well, not really, but there are a number of unfavorable comments about it floating around). Me? I actually think it's a positive. Sure, I would hope that anyone using Romantimatic would at least put in the effort and write their own messages rather than using the canned ones; that said, though, I don’t see anything inherently wrong or even unromantic about using technology to give your game a little boost. How many relationships have failed because of a lack of communication? A lot. And it’s not just a lack of communication over big issues; sometimes it can be as seemingly minor as the classic “You never randomly send me messages just saying ‘Hi’ in the middle of the day anymore” issue. Romantimatic is a tech-savvy way to make sure you don’t fall into that particular rut. And just think what it could do for long-distance relationships!

Ultimately, I think it comes down to this: What’s so different between using Romantimatic and, say, setting an alarm on your phone to remind you of a specific task you need to accomplish? Or by using Facebook to prompt you to wish your friends a happy birthday? Or even by sticking digital Post-It notes full of to-do lists to your computer’s desktop screen? It’s one of those instances where technology can be used to help, rather than to hinder.

Furthermore, I can even think of a number of times an app like this could be useful that don’t necessarily apply to traditional romantic relationships. Take this, for example: I’m not generally a forgetful person, but each year, I am faced with the following situation: In the space of one month’s time, my brother’s birthday, my parents’ anniversary, my dad’s birthday, my brother and my sister-in-law’s anniversary, and my mom’s birthday all occur. I always make sure I send presents and cards on time, but invariably, I will forget to call on one of those occasions. Usually it’s the anniversaries that suffer, which isn’t quite as bad as letting the birthdays go by the wayside — but one year I forgot to call my dad on his birthday, and I felt terrible about it. Something like Romantimatic would be useful for avoiding the dreaded “OMG I FORGOT TO CALL YOU ON YOUR BIRTHDAY I’M SO SORRY” call, no?

And before you say it: Yes, I could mark these occasions down on my calendar — and I do, in fact. But if I happen not to look at my calendar one day, then I won’t see the reminder I’d previously written down. BAM — now entering Forgetsville, population: Me. My phone, on the other hand, is in constant use; I’m much more likely to look at it, making it an ideal tool for jotting down reminders. Besides, my phone can make annoying beeping noises that force me to look at it, making absolutely certain I’ll remember whatever it is I asked it to remind me about. Can my paper calendar do that? No. No, it cannot.

If your problem is with needing calendars to remember important events in general, consider this: As Romantimatic’s creator, Greg Knauss, writes on his blog, marking something down on a calendar doesn’t mean you don’t care about something; it means that you know you have a habit of forgetting important things, but care enough about them to want to remember them. Coming from a forgetful person, what could be more romantic than that?

And hey — at least finding out that your SO uses Romantimatic would likely be a wee bit less traumatic than finding one of these apps on his or her phone, right?

More like this
The Real Reason Your Instagram Story Viewers Show Up In That Order
By Emma Carey
Behind The Hilarity Of The "POV: You Walk Into My Room" TikTok Trend
By Lexi Inks
30 Clever Ways To Slide Into Your Crush's DMs
By Griffin Wynne, Carolyn Steber and Lexi Inks
How To Turn Off Night Mode On Your iPhone Camera
By Emma Carey
Get Even More From Bustle — Sign Up For The Newsletter