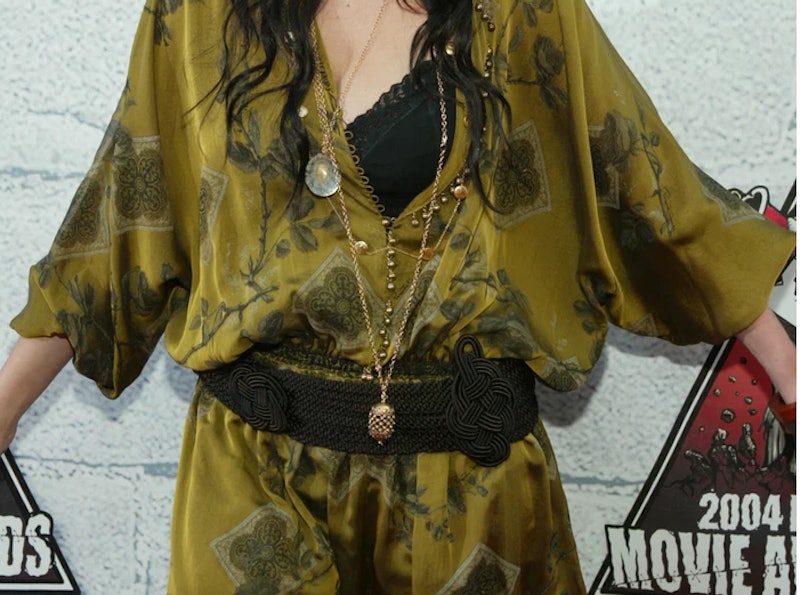 When you think back to the beginning of the millennium, you have to admit we had some iffy trends. Velour track pants were popular, almost everyone owned a Gap Polo, and peasant skirts were an actual thing. But the best one, IMO, was the oversized belt trend of the early 2000s. Almost everyone I knew back then picked up the idea and ran with it — from chic celebrities to Charlotte Russe-hunting suburbanite teens, we all had an interest in cinching our waists with the biggest belts we could find. And they seemed to go with absolutely everything. Whether layered on top of simple tank tops for some panache to slung super low on the hips in combination with mini dresses, the big belt had its uses.

There were so many variations as well. To me, it seemed like no matter what one's style was, the enormous belt could be pulled off with it. There were fringe-infused ones for the bohemians, chain-link ones for clubbers, Western buckled ones for our Southwest subscribers, and massive buckled ones (usually cinched around the bust) for totally classy ladies. You could have gone pleather, suede, metallic, or woven — there was literally something for everyone.

Looking back at the trend, it was semi-awful and hilarious in equal measure. So below are 11 big belts we all seemed to be wearing in the early '00s.

If you wanted to give your outfit an extra kick, why would you settle for one belt when you could wear two? It was just the thing to show your rebellion against fashion norms. Even though you probably got yours from Forever 21.

Perfect for tunic dresses or to layer on top of prairie skirts (*shudders*), this chunky boho belt really brought out the free spirit in you. Everything from the studs to the loosely wrapped fringe suggested that you pretty much were the contemporary embodiment of Stevie Nicks.

This was us tipping our hats to our moms' '80s style — I could just imagine my 'ma going to the club wearing this on top of her leotard and going nuts in pointed pleather heels. Except we awkwardly wore it over midi dresses and on top of tank tops.

Oh, the sass. I can barely handle it. Whether you subscribed to the punk subgroup or not, chances were you still owned one of these just because.

You never knew when you'd have to prove you were tough stuff.

It looked like a handful of shoelaces woven together. Totally chic.

Want more fashion and beauty? Check out the playlist below, and be sure to subscribe to Bustle's YouTube page for more hacks and tricks!

This was like the cool girl version of the goth chain link. Except it was replaced with gemstones and charms, and added some extra flair to our sand-blasted jeans.

They gave us that bohemian look that was so in vogue back in the early 2000s. And the nice thing about them was that they went with just about anything — tunics, maxi dresses, asymmetrical skirts, camisoles. Anything.

Most of us had a Texan point of view a decade ago: The bigger, the better. Not only did we want the width of the belt to be almost corset-esque, but the buckle need to resemble that of a wrestling champion. I probably had 12 of these hanging in my closet, just waiting to be cinched on top of a tank top that would be paired with a tiered skirt.

They were seemingly held together with prayers and barters, but looked so chic when worn over a tiny jean skirt or mini dress.

This one wasn't for the faint of heart, but if you were bold with your fashion choices, you probably owned a buckle that was roughly the same size as a dinner plate.

They offered a little something different than the normal buckle shape, and gave you a fun Southwest feel.

I don't know about y'all, but I'm pretty sold: In 2016, let's bring back the enormous belt. It truly served us well.

More like this
Netflix Reveals First Look At Wednesday In The 'Addams Family' Spinoff Series
By Bustle Editors
Kenan & Kel Just Reunited At The 2022 Emmys & Twitter Is Overjoyed
By Grace Wehniainen
Early 2000s-Era Rhinestone Tattoos Are Back, Baby
By Jordan Murray
Prefer Alcohol-Free Perfumes? Water-Based Fragrances Are On The Rise
By Audrey Noble
Get Even More From Bustle — Sign Up For The Newsletter