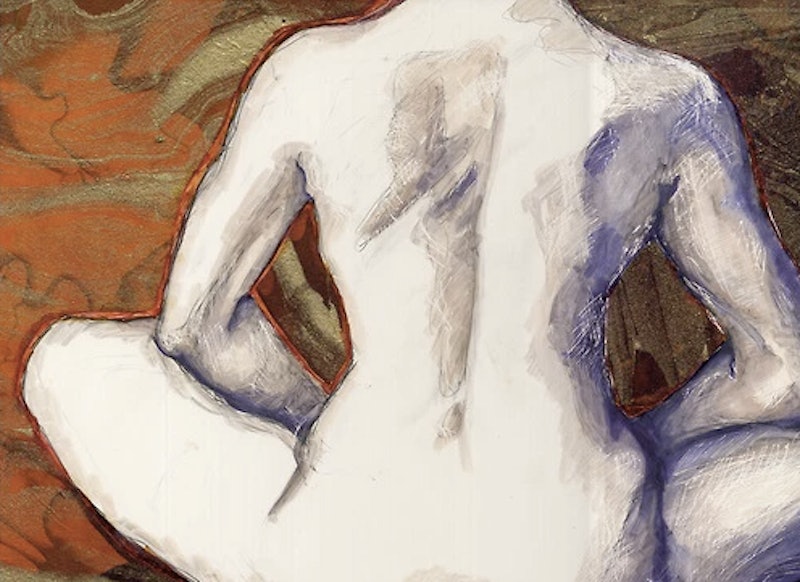 On my own personal journey towards self-acceptance, body positive art has been one of my most helpful tools. The first places where I really encountered the openly naked human body were my college art classes. I grew up home-schooled in a conservative religious environment, so my exposure to nudity before university was minimal. In my textbooks, classical art was censored with black pen to hide breasts or genitals, and sex education was surface-level at best. As I got older, I occasionally saw flashes of naked bodies in fashion magazines or R-rated films that I snuck by my parents, but even in these more permissive mediums, the bodies I saw were smooth and artificial, with any potential flaws neutralized by careful editing.

With these scant, incomplete sources to pull from, I learned to examine my own body with increasing dissatisfaction. When compared to the pristine, burnished glow of the bodies I saw in the media, my own seemed irrevocably flawed. Throughout high school, I struggled with this disconnect between the artificial images of the body I wanted, and the imperfect reality of the body I had.

When I entered a visual arts program in my second year of college, I was drawn to figurative painting, and began to take figure drawing classes to learn the fundamentals of depicting the human form. Suddenly my assumptions about what a body "ought to" look like crashed headlong into the realities of physical bodies displayed without the assistance of makeup artistry, professional lighting, or digital editing.

Here were bodies with lumps and dimples, age spots and hair sprouting from all nooks and crannies, uneven tan lines, and evident effects of time and gravity. I was shocked and enthralled. Never having had much access to real, naked bodies, nor such permission to look closely and carefully at them, I was astounded by the variety I saw in my classes. Presented with the unavoidable reality of imperfect bodies, I began to understand that the smooth and eternally nubile images I had seen up to this point were more fiction than fact.

I also began to realize after a few months that I was beginning to enjoy the variety and interest of bodies that fell far from the normative beauty standards I had always known. I grew bored with the so-called "classical" model type, whose body fell closest to the magazine images I still occasionally perused. Young, smooth bodies that fit standardized proportions were far less interesting for me to draw than bodies marked by time, experience, and individuality.

I learned to love the way light puddled in the curves and folds of dimpled flesh — the challenge of capturing the subtly uneven line of a crooked nose or unusual profile. As a consumer, I had been taught to passively absorb images of bodies presented to me in the media; as an artist, I was far more interested by bodies with something unique to engage my eyes, pencil, and paintbrushes. Depicting real bodies taught me a new way to see.

This newfound appreciation of traits I had previously considered "imperfections" also affected how I saw my own body. When I remembered the hours I had just spent delightedly trying to depict the way light bounced off uneven skin or glanced off the iridescent, jagged lines of stretch marks, it was impossible to view my own wobbly thighs and cellulite with the scorn I had once directed against them. While once I would have laughed skeptically in disbelief at someone who said they preferred the uniqueness of actual bodies to the sameness of "perfection," I came to realize that, without any prior intentions of becoming more body positive through my art classes, I had in fact come to this exact conclusion.

I began to actively seek out models who fell outside of normative beauty standards. I began to fill sketchbooks and canvases with as many fat, scarred, tattooed, and otherwise "abnormal" bodies as I could find. It wasn't always easy; most of the reference materials for figure drawing that I could find focused on idealized forms and so-called "universal" averages. But once in a while I would stumble across a model or reference photo set with something more to offer.

I started to seek out non-traditional creative venues, like Dr. Sketchy's Anti-Art School, which often featured models from local burlesque and performance troupes. I convinced my more open-minded friends to pose for me in exchange for free art and endless gratitude. I stalked DeviantArt for unique and interesting reference photos. As if trying to make up for lost time, I immersed myself in as many different forms of real, un-airbrushed human variety as I could find, replacing my old magazine images of movie stars and fashion models with my own pictures of women who weren't ashamed to be fully and freely themselves.

Where once I had thought of the human body, especially the female body, in largely decorative terms, through the process of observing and depicting so many wonderfully "imperfect" bodies, I learned to respect them; not as objects, but as physical narratives of lived experience. Scars became badges of honor; stretch marks and fat rolls were landmarks on the human topography of flesh and bone. I came to understand these variations as the embodiments of diverse and unique stories, each figure a changing landscape of resilience and survival.

When I graduated from college in 2011, my senior thesis show was a series of paintings celebrating the female body in all of its unique and honest glory. While I had begun these pieces as a purely academic exercise in technique, I had accidentally learned something far more valuable along the way. Getting to see and represent real bodies made me realize that there was no such thing as an "imperfection." Physical variations didn't make my body or the bodies of others less valuable; they made us unique, and far more interesting than any artificial ideal could ever be.

Thanks to the courage of the women who allowed me to include them in my work, the way I looked at and understood the human body was profoundly changed. Now, where I used to see flaws, I see beauty and individuality. The construct of perfection is a myth. I know, because I've seen the real thing.

More like this
The 12 Best Strapless Bras That Won’t Slip & Fall Down
By Audrey Williams and BDG Commerce
15 Must-Have New Beauty Launches, According To Our Editors
By Rachel Lapidos
This Week’s New Makeup Releases & More Beauty Headlines
By Audrey Noble
Billie Eilish Teased The Debut Of Her New Fragrance
By Audrey Noble
Get Even More From Bustle — Sign Up For The Newsletter