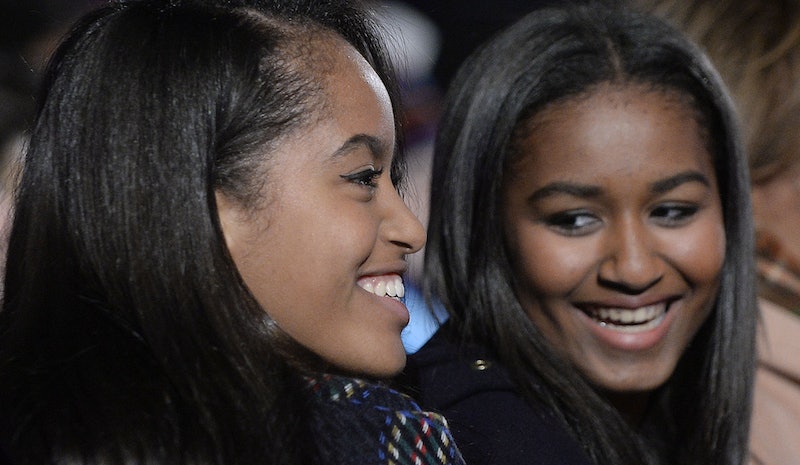 Following the same trend for their father's entire presidency, Sasha and Malia Obama did not the 2016 White House Correspondents' Dinner red carpet, nor did they sit at the dinner Saturday night. The budding style mavens are 17 and 14, respectively, but the teens skipped the final WHCD President Obama would be the guest of honor for.

Even though they've never attended a Correspondents' dinner before, I had high hopes that they might make an appearance for the the 2016 event. After all, they pretty much prepped themselves by attending at State Dinner at the White House back in March. For that affair, both sisters wore gowns designed by Naeem Khan, with Sasha rocking a very trend choker — it's probably where Gigi Hadid got her birthday outfit inspiration from.

There's no word on why the sisters didn't attend this year's WHCD. Perhaps there's a 21+ age limit on the event? The menu includes Diver scallops and duck confit, which obviously demands to paired with some delicious wine.

Even though we didn't get any new Sasha and Malia style moments on Saturday, let's look back at some of their other amazing fashion moments — starting with the year President Obama was elected.

Just a year later, we already see their style-loving sides coming out.

Living for these colorful coats.

Let's jump ahead to 2012. How perfectly coordinated are they?

Could they be any cooler?

This bomber jacket is everything I need in life.