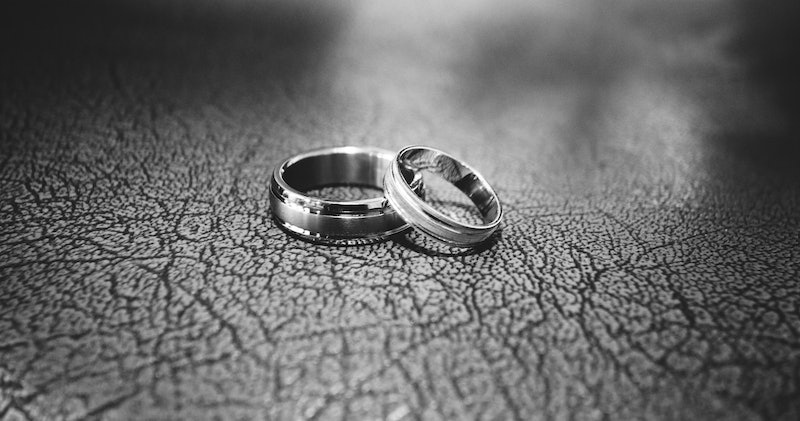 I usually cringe at hybrid words like “manorexic,” “manscaping,” and “manopause,” but “mangagement ring?” As in… an engagement ring for a dude? I want more than just an Urban Dictionary definition for that one. Luckily, for me (and you), The Atlantic just published a piece that not only defines the term, but also offers a history lesson on the man-specific accessory. Did you know mangagement rings were a thing in the 1920s?

Well, they existed back then but they didn't quite catch on. It was more of an ahead-of-the-times attempt made by Macy's (or L. Bamburger & Co., as the department store was called back then before a branding makeover) at marketing such an item. They even used masculine names like “The Stag” to market the rings, but nobody was interested. Keep in mind that wedding bands for guys weren’t even a thing until the 40s and 50s.

Obviously a lot has changed in the past six decades: laundry isn’t just the woman’s responsibility anymore, stay-at-home dads aren’t uncommon, and of course there have been countless advances in women’s rights and equality in general. Perhaps in light of the evolution of marriage, in 2009 British jewelry designer H. Samuel created a modern take on the men's engagement accessory called The Tioro Ring. It was nicer than a typical man’s wedding band, but less expensive than a woman’s (and less fancy too, of course).

Around the same time, celebrities started bringing the trend back—or should I say, making it actually happen in the first place. Jennifer Hudson gave her fiancé an engagement ring, and Michael Bublé wore one as well. The accessory has also made appearances on shows like Glee and Modern Family, both times in regards to plot lines involving same sex relationships — another driving force behind the popularity of mangagement rings.

With so many advances being made to legalize gay marriage, it seems only natural that these pieces would be in high demand. Jewelry designers like Rony Tennenbaum are creating bands specifically for gay couples. This whole mangagement ring thing is kind of cool, right?

There are a couple aspects of concept that bum me out. For one, according to a survey conducted by the XO Group Inc., only five percent of engaged guys are wearing them. Sure, it’s a fairly new trend that involves expensive precious metals, but I was hoping that number would be a little higher. The Huffington Post also pointed out that they could be the jewelry industry’s gimmick to take more of your money.

Maybe it’s just because I’m one of those “modern girls” who is used to taking hot yoga classes with an equal ratio of guys to girls, but I like the idea. Why should women be the only ones with a sparkly token to commemorate their engagement? And why should women be the only ones wearing what's essentially a big "I'm off the market" sign in the lead up to a wedding? Further, why can't women be the ones to propose with a ring in the first place? Perhaps if bigger jewelers like Tiffany’s were to jump on the trend, more men would be wearing them —and more women and men would be giving them. Or if maybe bigger stars were wearing them…where is Brad Pitt’s?

More like this
Androgynous Formal Wear That Will Make You Feel *So* Fancy
By Megan Lasher
Think Your Partner Is Cheating? These Tarot Cards May Confirm Your Suspicions
By Kristine Fellizar
How To Politely Reject Someone Who Keeps Asking You Out
By Laken Howard and Lexi Inks
8 Signs Your In-Laws Might Be Toxic
By Kat Kuehl
Get Even More From Bustle — Sign Up For The Newsletter