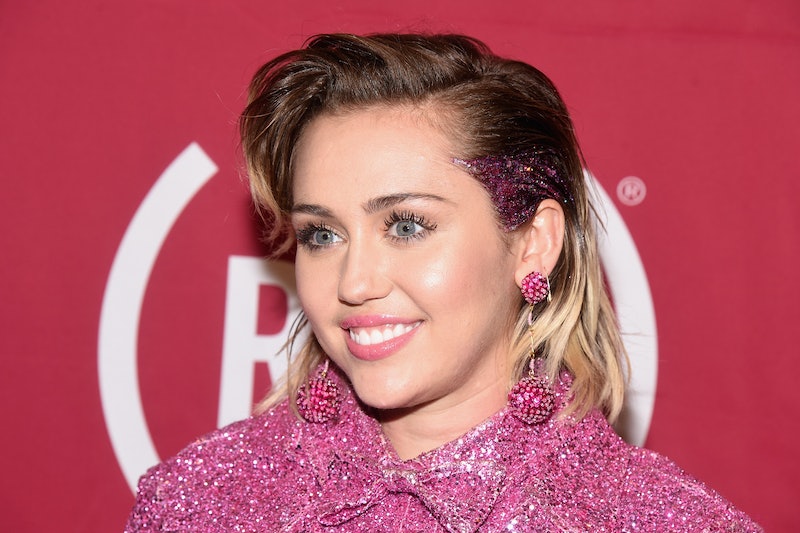 Another day, another Miley Cyrus tattoo. But this time, the former Disney star has gotten a matching design with the sister-in-law of rekindled boo Liam Hemsworth. That's right: Miley Cyrus got a matching tattoo with Elsa Pataky, wife of equally-beloved actor Chris Hemsworth. It's not entirely surprising, since Cyrus is known for her spontaneous ink and has been seen out and about with Pataky since reconciling with Liam.

The tattoos were designed and inked by Australian tattoo artist Lauren Winzer, who shared an image of the fresh tats on her Instagram account on Apr. 30. It's not just Cyrus and Pataky who got the simplistic wave tattoos, though, but friends April Munro and Kalani Miller, too. The tattoo design itself has been credited to Australian surf champion Kelly Slater.

Miller captioned her reposted image of the tattoos nonchalantly: "When girls night starts out like this...Thank you [Lauren Winzer] for the new ink! And the boo [Kelly Slater] for the scribble." This statement made it seem like the group tattoo was more of an of-the-moment act of spontaneity than a much-deliberated decision to get matching ink. Of course, this once again reinforces the idea that Cyrus is one for fun and impromptu acts.

This comes as Cyrus' second (publicly debuted) tattoo in a week, with a humorously controversial tat before it. As Us Magazine reported, Cyrus mistakenly said her new tattoo of Saturn was a tattoo of Jupiter. (She's since changed the Instagram caption entirely.)

Personally, I adore this fun act of friendship and new family performed by Cyrus, Pataky, Miller, and Munro. Whether or not it symbolizes anything about the Hemsworths, or Cyrus' relationship with Liam, is up for debate. But what can be confirmed is that a girl gang has solidified its bond — and permanently shown a love for all things wavy — with a cute, simple tattoo.

Although we don't yet know the meaning of the waves, they're a heck of a lot better than getting your boo's initials tattooed on you. At least this way, Cyrus will always be reminded of Pataky with her new tattoo, rather than her on again, off again relationship with the younger Hemsworth brother.

I hope this isn't the end of Cyrus' down-under tattoo adventures, either, because the simple designs are sweet, and we can never know what to expect next.