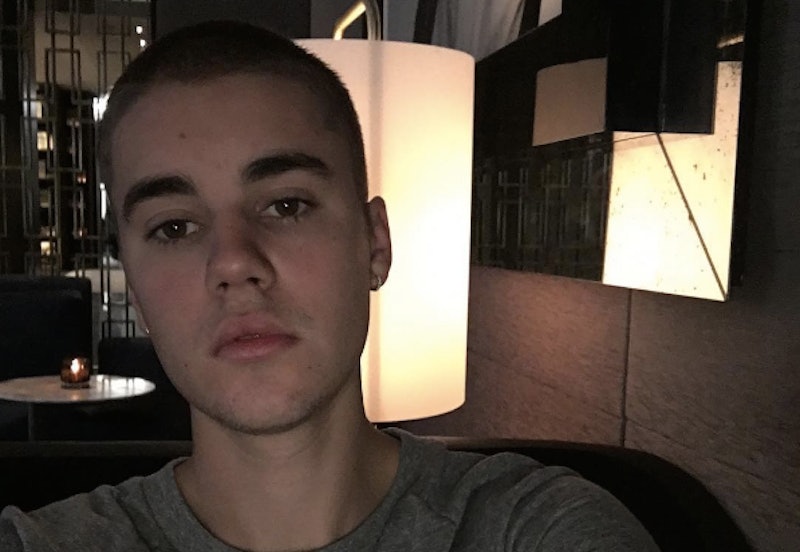 On Apr. 29, Justin Bieber finally amended one of his more problematic aesthetic decisions to date. The pop star posted a series of selfies on his Instagram debuting a new shaved head, People reported, clocking in as Bieber's second to most drastic hair transformation ever. Beliebers can breathe a sigh of relief now that the singer has finally lobbed off his dreadlocks, an inarguable example of cultural appropriation that caused quite a stir when he unveiled them in another Instagram post earlier in April.

Bieber received quite a bit of backlash for his hairstyle, since the appropriation of Black culture can understandably come across as racist or insensitive to a lot of people. However, it seemed the Biebs wasn't up to speed about some of this stuff. When Kylie Jenner was being critiqued over Instagram for her braids by activists like Amandla Stenberg in summer 2015, Bieber jumped in to defend her. In saying that the criticism towards Jenner was "ridiculous," as ET reported, the musician proved himself to be quite unaware of the gravity of Jenner's choice — something that would then echo through a sea of his own dreadlock selfies.

In a recent selfie video, for which he adopted a "surfer dude" accent reminiscent of Saturday Night Live's "Californians" skit, Bieber actually imitated fans who were dissatisfied with his 'do, saying, "Dude are you gonna do anything with your hair, are you just gonna leave it like that?" It's an awkward video to say the least, but this is precisely why his new shaved head comes as a relief.

Many fans seem just about as grateful as I am after discovering this new development. On the photo above, one Belieber commented, "I DIG IT," while another said, "My prayers have been answered."

I'm going to bet that the 22-year-old was aware of the backlash existing in his fan-base towards his dreads. Could it be that he took heed to popular opinion, and shaved off the dreads for the love of his supporters? Could it have been because he was just feeling like he needed an aesthetic change? Or did he really come to terms with the insensitivity of his choices?

I'd love to think the latter is true. Perhaps the "Sorry" singer is genuinely sorry about causing upset. So here's to an era of no-hair.