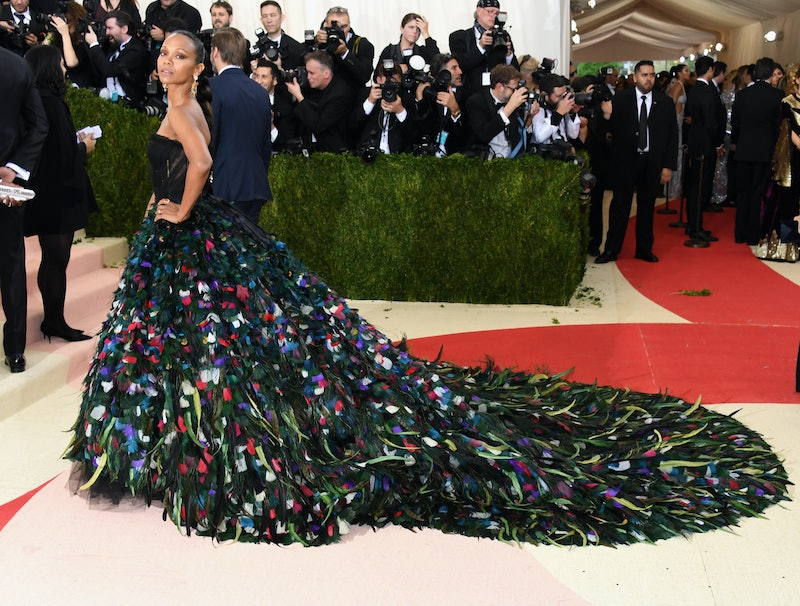 When most of us heard that the theme of the 2016 Met Gala was "Manus x Machina: Fashion In The Age Of Technology," many kind of assumed that the red carpet would be awash with robotic metals, lights, futuristic silhouettes, and other creative attempts to represent the place where fashion and technology converge.

Guests who get invited to this exclusive event have to show off not only their sick fashion sense, but ability to be thoughtful about host Anna Wintour's chosen theme. In other words, you simply can't show up in a Renaissance-inspired bustier to an event modeled around technology: You have to look the part. After all, it's arguably the most important fashion event of the year. The stakes are high and the rapidly-typing fingers of social media demand nothing less than excellence.

What we might not have anticipated, however, was that the red carpet would look like a lot of other things: Futuristic, ridiculous, and otherwise. As celebrities began to show up one-by-one, their looks started reminding me of things I never thought they would: Sure, there were robots. Lots of robots. But there were also beloved Disney princesses, popular Broadway musical characters, and household items. These looks were calling all manner of things to mind, and not all of them were fashion-related.

1. Robots, All The Robots

With a theme like "Manus x Machina: Fashion In The Age Of Technology," it's no surprise that half the celebrities there would end up dressing like sexy, high-fashion robots. Let's just hope Robot Taylor Swift doesn't try to overthrow humanity.

2. The Fish From Our Childhood

I, personally, wouldn't mind if Zoe Saldana taught me how to read.

Rita Ora's gown was beautiful, but you can't deny the similarities here.

Admit it: As soon as you heard the theme of this event, you knew the Tin Man-inspired looks were going to come pouring in.

This way Gaga can wrap up her leftovers and take them home.

Yep. Some folks managed to look like extras in a Nick Park movie. It was glorious times.

The Lord Farquaad aesthetic always seems to make an appearance at the Met Gala. For 2016, it was Kylie Jenner who took us there.

Personally, I think being compared to tinny '80s stovetop popcorn is a great way to end an evening.

11. An Assortment Of Cartoon Characters

If you don't channel Mr. Krabs at the Met Gala, you clearly aren't doing life right.

The future, ladies and gentlemen.

More like this
Harry Styles’ Red Carpet Looks Have One Thing In Common
By El Hunt
20 Photos Of The 'Hocus Pocus' Cast Then & Now
By Radhika Menon
Prefer Alcohol-Free Perfumes? Water-Based Fragrances Are On The Rise
By Audrey Noble
How To Get Your Hands On The Pat McGrath X Supreme Nail Kit
By Justine Knight
Get Even More From Bustle — Sign Up For The Newsletter