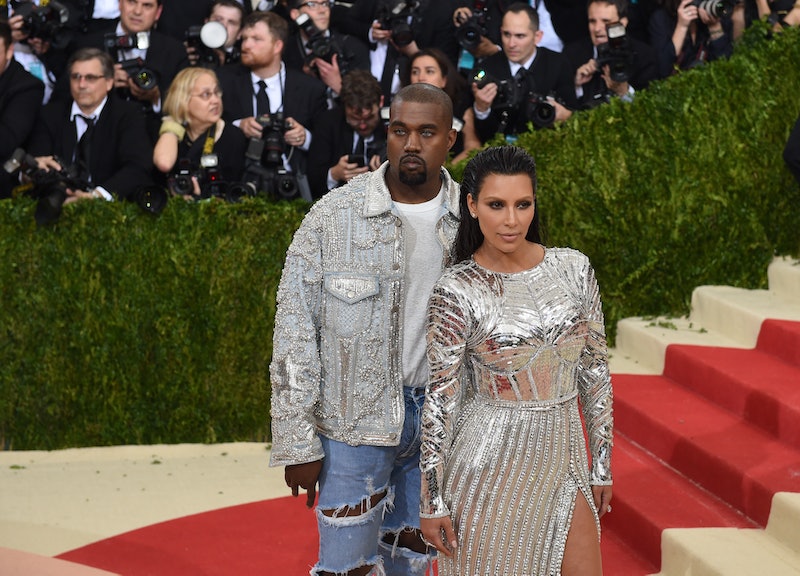 If there's one great thing about writing on Kanye West's 2016 Met Gala look, it's the understanding that it doesn't matter how the man looks: In his mind, he's the best-dressed person in the place.

I admire that about Kanye. No matter where he goes or what he's doing, he makes the unmistakable impression that he thinks, nay, knows he's the most important person in the room. It doesn't hurt that he's got Kim Kardashian by his side, a woman who is no stranger to daring Met Gala looks. This year, she wore a high-shine metal Balmain gown, and looked like her usual epic self.

But let's get back to West's look: After all, that's what Kanye would want, isn't it? Tonight, the hip-hop legend departed from his usual all-black aesthetic and hit the red carpet in a pair of distressed jeans and a jewel-encrusted jacket, a fine ensemble to go with the party's "Manus x Machina: Fashion In An Age Of Technology" theme. The really surprising part of his look, though, was his slightly creepy colored contacts; a move that basically changed the look of his entire face and made him look, well, from the future. In the best of ways.

The pair totally worked the red carpet together.

Let's just hope that Kimye isn't breaking the rules like they did last year: Defying explicit orders from host Anna Wintour, the Wests took selfies on the red carpet. Rumor has it that Wintour sent them an explicit letter warning them that if happened again, there would be hell to pay. However, when he's looking this good, it's hard to believe that Kanye won't Kanye and break the rules anyways.

Just another day in the Life of Pablo.