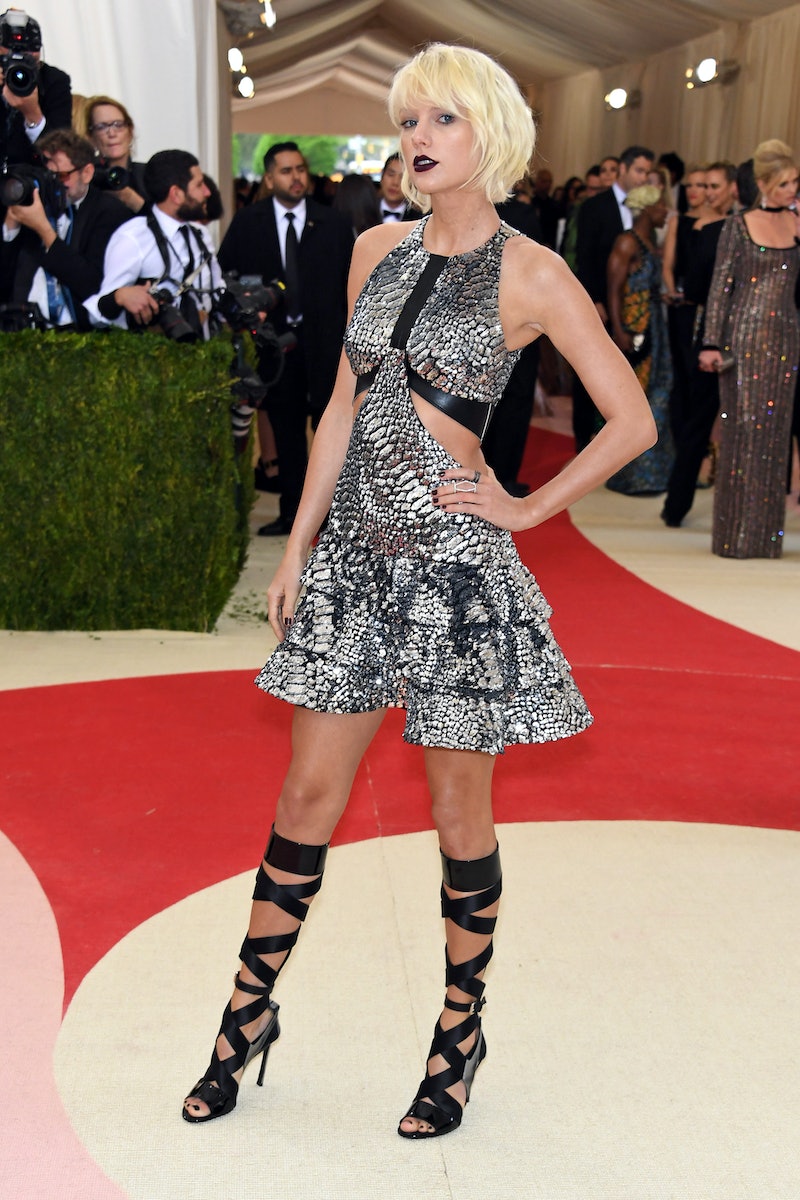 The queen of both pop and country is at it again. Taylor Swift is hosting the 2016 Met Gala so you knew she was going to pull out all the stops when it came to her outfit for the evening. Lately Swift has been mixing up her look in a big way. She recently debuted bleached blonde locks on the cover of Vogue and has since been spotted sans signature red lip (*gasp*) for bestie Gigi Hadid's 21st birthday celebration. Give the recent style change-ups she's been making, I was definitely expecting a very different look for Monday's Gala, but perhaps the most surprising thing about her ensemble is how similar it actually is to a vintage Swift signature that many devoted fans will recognize.

Last time she attended fashion's biggest party, the "Blank Space" singer was wearing a super Old Hollywood pale pink dress that erred on the "sweet" side, but this year she opted for the exact opposite vibe. So, what is Swift wearing at the 2016 Met Gala? She chose a silver dress with cutouts along the rib cage, a halter neckline, and a ruffled skirt. She paired the clearly robot inspired outfit with some intense lace-up heels, rings and an ear cuff by Eva Fehren, that new platinum 'do, and some bold plum lipstick. Yes, you read that correctly. This is still Taylor Swift we're talking about, the singer who was once a huge proponent of early '00s prom dress vibes on the red carpet

Sure, she's got an edgy vibe here, but isn't this dress giving you some flashbacks to a previous Swift look? Don't you recall another time when she rocked a spangled silver mini dress and rather bold black shoes?

There it is! She might be ditching some of signatures, like that girl-next-door blonde and those red lips, but some things have sure stayed the same.

The back of this Met Gala dress is totally open on the bottom, giving the illusion of two separate pieces when you look at her from behind.

She never does stray too far from her favored co-ord silhouette, does she? That said, I like her new take on the look. Well done, Swift!

More like this
Everything To Know About Taylor Swift’s 10th Studio Album, 'Midnights'
By Grace Wehniainen and Jake Viswanath
Taylor Swift’s Latest ‘Midnights’ Look Went Heavy On The Glitz
By Allie Fasanella
There's A Taylor Swift Easter Egg In Ryan Reynolds' 'Deadpool 3' Teaser
By Marina Watts
Kate Middleton's Tribute To The Queen Also Had A Connection To Princess Diana
By Sam Ramsden
Get Even More From Bustle — Sign Up For The Newsletter