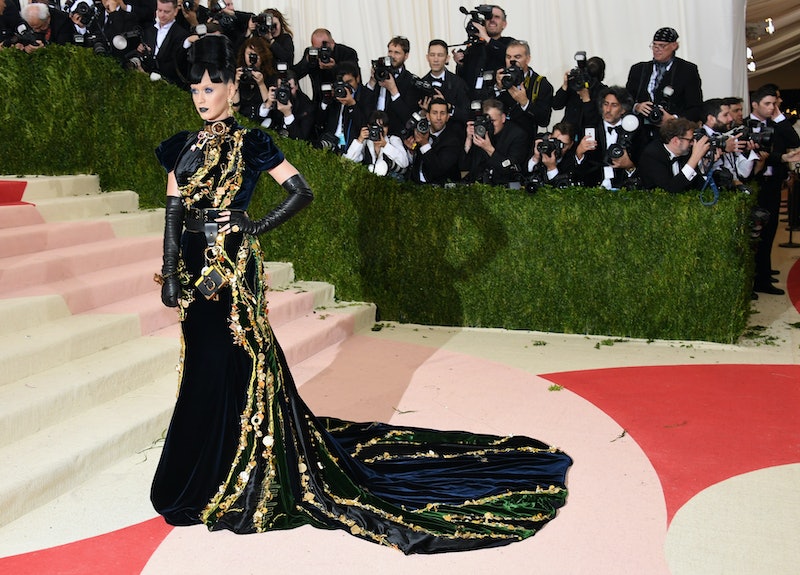 If you're not really a fan of couple-y, in-your-face matching red carpet looks, I kind of get it. It's a little much. But when I heard that Katy Perry and Orlando Bloom wore matching Tamagotchis to the 2016 Met Ball, as Fashionista reported, I had to admit — it was kind of adorable. You know, as '90s accessories go, anyway. The rumored couple didn't walk the red carpet together, and neither have officially announced their relationship either, but if there's anything in the world that can truly announce a new relationship, it's a strategically placed '90s item, am I right?

According to Fashionista, when asked by reporters about the toy (statement piece?), Perry said, "That's my tech contribution." Even if it didn't feature any other facets that were strictly adhering to the Manus x Machina theme, Perry's Met Gala look was fierce to say the very least. It featured bleached eyebrows as well as a black lipstick (a shade part of her own collection with CoverGirl, in fact), so it's not like she really needed an extra... well, anything to complement the look. But as I often ask myself when getting dressed in the morning, "Why not throw a Tamagotchi on, too?"

It's hard to spot the Tamagatchi at first glance (there's a lot to take in, after all), but you can just see it peeking out behind Perry's clutch. If you squint.

Are they together? Are they not together? Do they just share an intense love for Tamagatchis? We may never know.

Like I said, hard to spot the '90s quirk amongst all the fabulousness. But it's there.

Of course, there's always the chance this is just a really, really specific coincidence. But my guess it was a little more calculated than that.