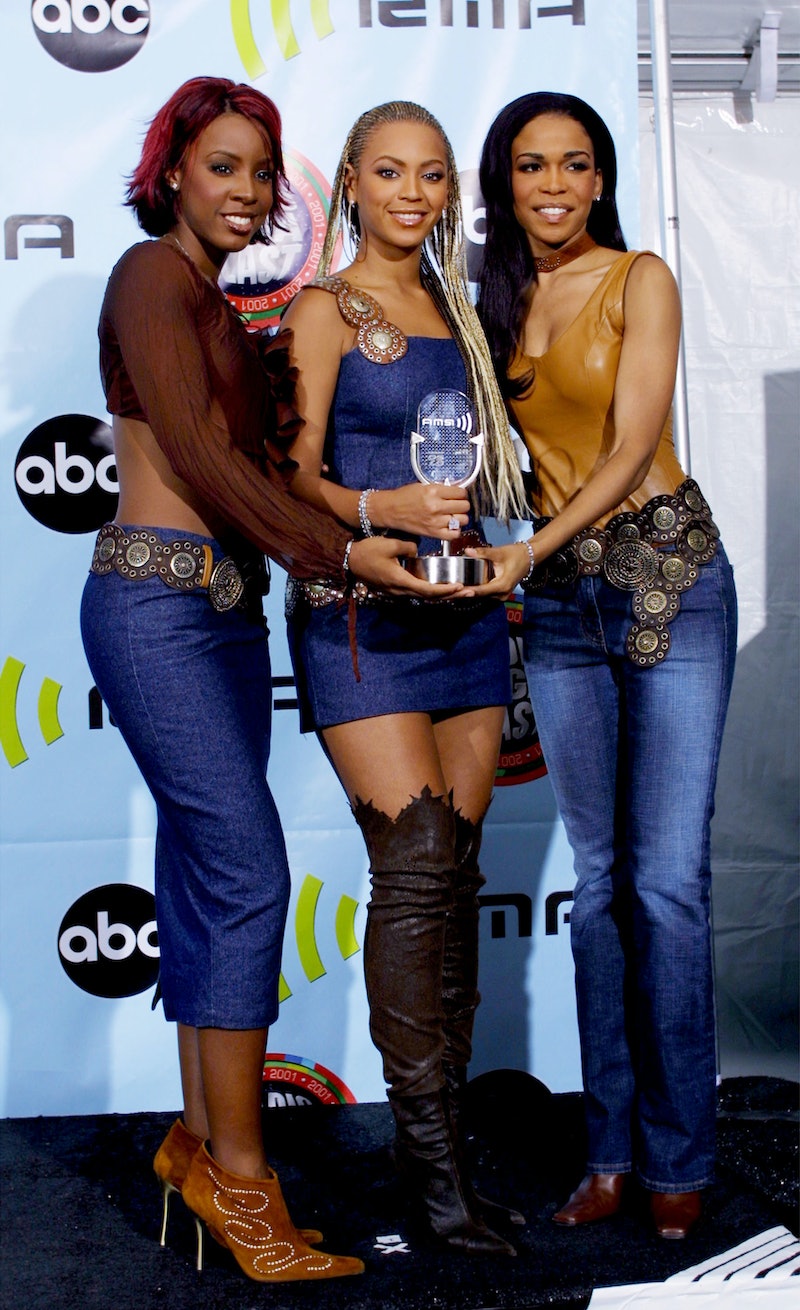 At the end of the ‘90s, just when we thought fashion couldn’t get any more odd, the dawn of the millennium flung some wild styles into the spotlight, including crazy early 2000s belts. Most of us thought that eccentric fashions would die out with the novelty fads of the ‘90s, but in hindsight, we’d only just seen the tip of the iceberg when it came to weird trends. Like many things in life, it all seemed pretty normal at the time. However, looking back at the hottest trends of the early 2000s makes me wonder what we were all thinking.

It’s not that early noughts trends were bad per se; it’s more that the combination of multiple ‘00s fashions made it look like we got dressed in the dark. I mean, how do you make sense of an outfit comprised of lace-up jeans, a corset top, a pageboy cap, an OTT belt, and fingerless gloves?

When the clock struck midnight to ring in Jan. 1, 2000, I was expecting robots to pop out from behind the couch, attacks from the Millennium Bug, and to find a hover car parked in our driveway. I guess I had my sights set a little too high for the early ‘00s, anticipating it'd be a time filled with futuristic, gadget-led fashion. Instead, we entered an era of bizarre belts. Here’s a look at everything they were made of.

In her iconic performance of "I'm a Slave 4 U" at the 2001 MTV Video Music Awards, Britney Spears set a new trend of wearing scarves as belts. Although I loved her combo of jewels and scarves, it was tough stuff to find a single belt that encompassed both elements IRL.

An oh-so-grownup Hilary Duff was seen sporting a beaded belt in the early '00s and looking rather elegant. When we wore decadent faux bejeweled belts like Duff, we felt 13 going on 30.

I'm sure the Olsen twins would never wear an actual robe tie on the red carpet, but if we wanted to copy this sophisticated, satin sash belt as penniless tweens, we had to make do with the tie from our bathrobes.

I'm not really sure how Britney Spears could walk in this harness-style belt, let alone pull any dance moves. Growing up, most of us would have loved to get our hands on a trendy, totally non-functional belt like Ms. Spears' style, but this was pretty high-end. Only the most fashionable aunties and majorly cool babysitters would wear these kinds of belts.

A chain belt decorated with faux flowers was a wonderful way to add a feminine touch to an outfit, as shown here by Tyra Banks.

Christina Aguilera looked awesome in her simple chain belt, proving that these babies looked best when paired with low-rise jeans.

Like any fashionable girl band, the members of Destiny's Child were queens of coordination. Pictured here in the early '00s, they sported matching outfits that boasted denim and leather pieces, pulled together harmoniously with edgy disc belts that looked to be inspired by gladiator shields. In the real world, we sported these belts with boho skirts and sandals in the summer.

Paris Hilton cleverly matched her bright pink ribbon belt to her (just) visible bra strap for a flirty, Barbie-esque look. We might have tried to copy this ribbon belt style, but managing to get it looking pristine was really tricky. Ribbons never stayed put and often ended up on our stomachs or halfway down our legs.

The term "anything goes" never rang truer than in the case of '00s belts, as showcased here by Kelly Rowland accepting an award with Destiny's Child and wearing a bit of neon pink rope as a belt.

Who knew that ethereal accessories and hip street-wear could work together? Gwen Stefani proved that nothing is impossible with her baggy, skater-style jeans and glittering thread-like belt.

Oh, Shakira! You shimmied your way into our hearts in the early '00s and the world hasn't been the same since. Back in those days, we'd do anything for a bit of Shakira magic in our lives, including flaunting an embellished belly dancer scarf as a belt and wiggling around our living rooms to "Whenever, Wherever."

With her hippy dancing and booty shaking, Shakira was known for rocking a variety of items around her waist. Although this feathery fringing looks really quirky and goes sublimely well with her outfit, it does look a little like she raided a haberdashery store.

Perhaps Moulin Rouge! is to blame for the many outfits that contained a belt and made a nod towards the underwear as outerwear trend. However, the early '00s saw the release of Gwen Stefani's pirate-themed music video for "Rich Girl," which probably influenced her decision to wear a giant piece of leather around her midriff. Whatever floats your boat, I guess.

Let's bring back this fun, quirky trend and tie random stuff around our waists and hips. I'm going to hit up my local craft store and see what treasures I can find — who's with me?