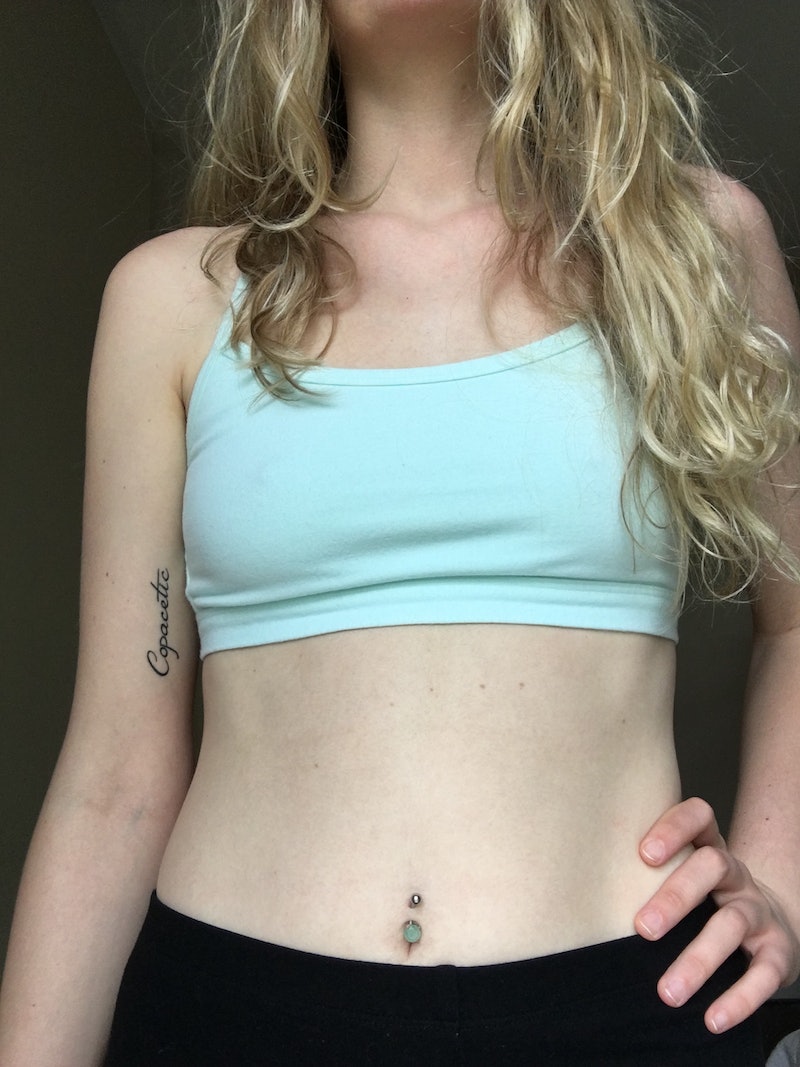 About six months ago, I ditched padded bras. I wish I'd made the switch sooner, but I used to love padded bras so much that I wouldn't buy or wear a bra that wasn't a push-up. (At one point in my life, I even wore push up bras to the gym. Ugh!) I mean, I still understand the appeal of padding. Push-up bras can offer you considerable cleavage and total nipple coverage — two functions that lightly-lined bras and bralettes simply can't perform for small-breasted folks like myself. So if you dig padded bras, I totally get it. And if you don't like wearing bras period, that's also awesome. I wouldn't be surprised to find myself on your level someday.

For now, though, I'm just not comfortable going braless in public, and I still genuinely enjoy both finding and sporting beautiful bras. If you (like myself) are over padding, but you're also not ready to give up on bras completely, then you might want to consider avoiding padding or even underwire for a little bit. If your experience is anything like mine has been, you'll end up ceremoniously burning all of your push-up bras on a Game-of-Thrones-style funeral pyre. Or, you know, just donating them to Goodwill.

Everyone's different, but personally, I feel so much happier and sexier since I stopped wearing padded bras that I think I'm finished with them for good. Here are five reasons why I ditched padded bras for bralettes.

I have literally never found a comfortable padded bra or push-up bra. Even when wearing push-up bras made me feel sexy, I still dreaded the inevitable discomfort that accompanied all that padding and underwire. When I wore push-up bras daily, the very first thing I would do when I got home from work, school, or a night out was unhook the thing and fling it across the room in disgust. In fact, my bras were so uncomfortable, that I made a point of only wearing them when I left my apartment.

Since I started wearing bralettes and lightly-lined bras exclusively, I pretty much never dread putting on my bra. Actually, the one I'm wearing right now is so comfortable that I often wear it even when I'm home alone. What's even more impressive, though, is the fact that I've actually forgotten I was wearing it, period.

2. I Finally Realized I’d Been Wearing Padded Bras For Other People

It's totally possible to wear padded and push-up bras for no one but yourself. If that's the case for you, awesome! For me, however, that was never the case. It took me a rough breakup and five months of being single to realize this, but I don't think I ever wore a padded bra for myself.

I wore push-up bras because I wanted my boyfriends and crushes to think I looked hot. I wore them because advertisements, movies, TV shows, and some of my friends told me that flat chests were disgusting. I wore uncomfortable bras for years, and I did it for everyone but myself. When I chose to ditch padding, I got to take ownership of my body and my appearance in a new way — while simultaneously sticking a figurative middle finger to the male gaze, of course.

On top of all that, deciding to embrace my natural shape has made me feel defiant in the best of ways. Before I switched to bralettes, breast augmentation ads used to leave me feeling bad about my breasts, but now they don't even phase me. I mean, I still think they suck — but I no longer give them power over my body image, and it feels awesome. While I used to dress for other people, now I only choose to wear the bras and outfits that make me feel the sexiest, comfiest, and most natural.

3. I Wanted To Learn To Love My Small Breasts

I used to have some serious body images issues. (Still working on some of them.) Of those issues, my insecurity over having small breasts was always at the top of the list. So when I switched to lightly-lined bras and bralettes, I did so largely because I wanted to learn how to feel sexy and feminine without trying to make my boobs look any bigger.

I won't lie, when I first gave up on padding, I didn't like how much smaller bralettes and lightly-lined bras made my boobs look. But after a little while, I ended up feeling both physically and psychologically free of some internalized body-shaming that I didn't even realize I was dealing with. I started seeing my whole body as a beautiful body, instead of only allowing myself to feel good about certain parts — like my hair and booty.

Ditching padding changed my whole perception of beauty standards in general, too. Women's bodies are too often modified to fit cultural beauty ideals, but beauty is far more ambiguous and diverse than any one culture's beauty standard. When I decided to not just know this, but to live like I knew it, I ended up liking my small tits more than ever.

4. Padding Makes Second Base Way Less Fun For Everyone Involved

In my experience, padded bras suck when you're trying to get down with someone, because padded bras seriously mess with everyone's ability to get some boob action. The person going in for a good grope gets a handful of memory foam, and the person anticipating stimulation feels nothing. It's disappointing, uncomfortable, and awkward for everyone involved.

This is why I now typically wear bralettes, or no bras at all, when I go on dates. Even if that doesn't sound like your style, I think you should at least consider trying it out. You might feel a little vulnerable at first, but zero padding is just way more fun when the sexy part of date night happens.

Comfort needs and body positive goals aside, the biggest reason I decided to give bralettes a chance six months ago was because I'd finally reached a point in my life where padded bras and push-up bras no longer made me feel sexy or confident or grown. I started to realize that when I chose to hide my body with padded bras, I was just feeding my own insecurities. So when I couldn't put on a push up bra without feeling disappointed and disingenuous, I knew it was time to make a change. I'm so glad I did it, too, because now I'm comfier — and more body positive — than I've ever been.

Back when push-up bras were my jam, I needed padding, forced cleavage, and the reassurance of other people to feel good about my own tits. Nowadays, I truly don't care if other people think about my boobs at all, (with the exception of my dude, of course) and that feels sexy as hell.

More like this
Berriez Founder Emma Zack On Her Size Inclusive NYFW Show
By Dominique Norman
Are Quality Time & Gift-Receiving Love Languages Compatible?
By Lexi Inks
The Differences Between Polyamory & Open Relationships
By Lexi Inks
The 19 Best Tweets & Memes About Bisexual Awareness Week
By Lexi Inks
Get Even More From Bustle — Sign Up For The Newsletter