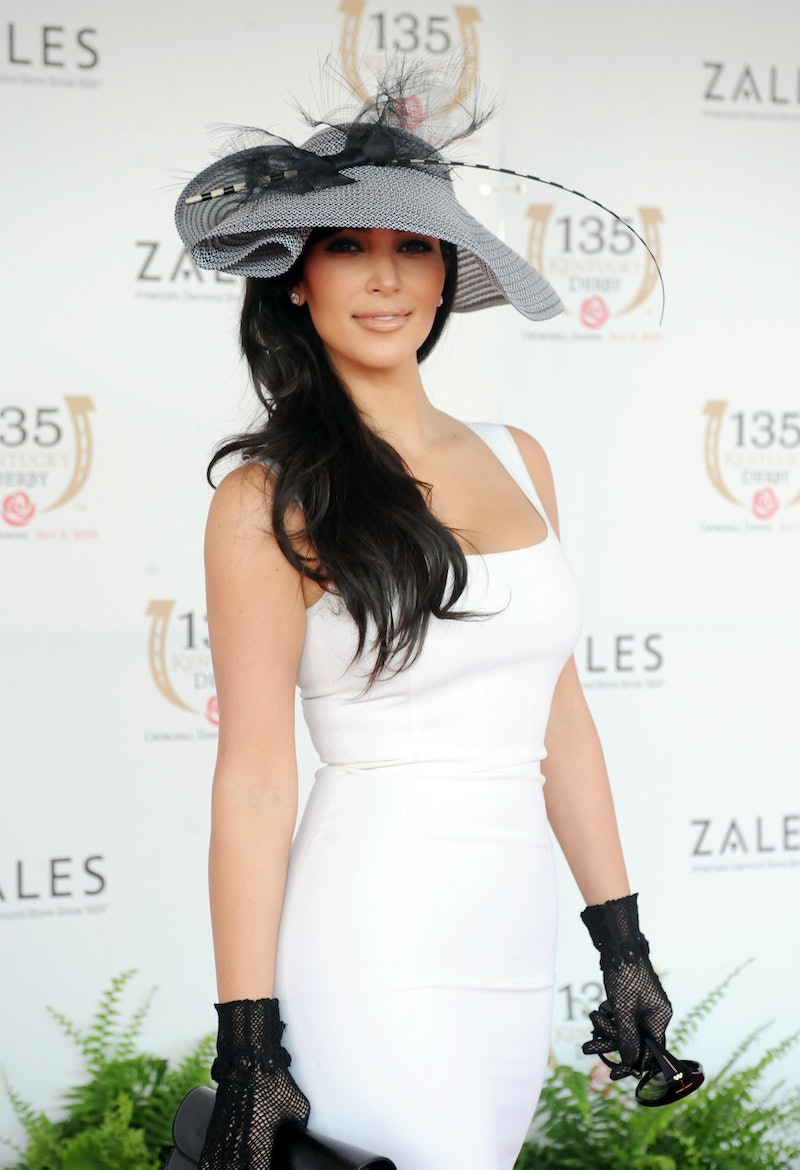 With the 142nd Kentucky Derby coming up this weekend, it's time we took a look back. One of the South's greatest traditions is also a got spot for celebrities. For example, the one Kentucky Derby hat that defined 2009 was worn by Kim Kardashian. She broke into the Derby game like Steph Curry broke into last year's NBA Championship.

From what I've come to see from amazing millinery practice at past Derbys, hats that make the most impact are generally colorful, eye-catching, wide-brimmed, and decked with flowers. No one cares about your dress, your heels, et cetera. This is an entirely different world in fashion.

However, the hat that Kim K wore for her Derby debut makes a different kind of dramatic statement. When hats go dark, there is a whole different world that opens up in contrast to the regular Kentucky Derby Southern belles. This grey number reminds of the historical roots of the Derby.

"The Kentucky Derby is the longest running sporting event in the United States," according to the official Derby website, dating back to the late 1800s when Meriwether Lewis Clark traveled to Europe and attended the Epsom Derby in England and the Grand Prix de Paris Longchamps in Paris. He was inspired to create his own club, and did so upon his return. The Louisville Jockey Club sponsored the first Derby in 1875, and the rest is history.

So, in 2009, Kim Kardashian wore designer Ariane Azarpira's grey chapeau with an LWD, according to HatLife, and started a trend, as People points out.

Obviously, since then, style has changed immensely. However, it can't stop me from wondering what kinds of hats I'll see this year. Will there be more dark and sultry looks like Kim Kardashian's, or is it back to the Spring florals and flamingo for the Derby-goers?

Here she is with momager Kris Jenner.

Check out that hat up close. So early '00s chic.

More like this
Phoebe Dynevor Serves ‘Bridgerton’ Underboob In Stunning Floral Gown
By El Hunt
J.Lo's Micro-French Manicure Has A Fun, Sparkly Twist
By Olivia Rose Rushing
The Biggest Fashion Moments Of Paris Couture Week 2023
By Dominique Norman
10 Times Haley Lu Richardson Dressed Just Like Portia
By Dominique Norman
Get Even More From Bustle — Sign Up For The Newsletter
From hair trends to relationship advice, our daily newsletter has everything you need to sound like a person who’s on TikTok, even if you aren’t.