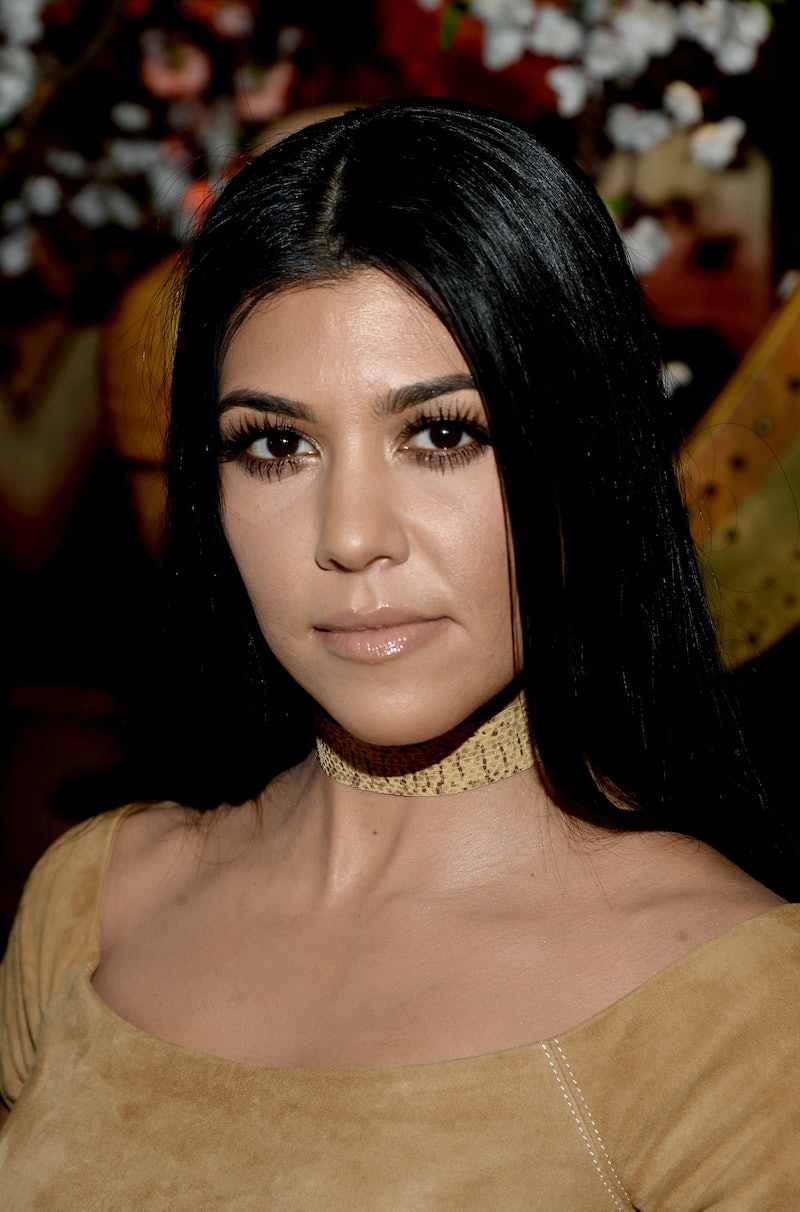 From Khloe Kardashian to Kylie Jenner, the stars of the reality television goldmine (that is Keeping Up with the Kardashians) know how to keep people on their toes with fashion and beauty trends. Now, Kourtney Kardashian's hair stylist reveals a hair secret that he uses with her, and it's not nearly as complicated or costly as you'd think it'd be. No $200 products and no repeatedly salon trips are required. Instead, Kardashian's hair stylist says keeping the star's look updated is all about the part, according to a video posted on E! Style.

While her sisters are often more well-known for the makeup and hair, don't sleep on Kourtney Kardashian. The reality star and mother of three rocks a look just as well as her famous sisters, and while the eldest of the three Kardashians has other focuses on her social media and website, it's time to give her incredible sense of style the attention it deserves. After all, little sister Kylie Jenner did name a Lip Kit after her.

It's not a secret that Kourtney's sisters Khloe Kardashian and Kylie Jenner are known for their hair game. Whether it's "Koko" transforming into a breathtaking blonde or Jenner turning into...well, everything, elder sis Kourt keeps her look consistent, but somehow, it never becomes boring or stale.

Thanks to E!, Kardashian's stylist is revealing what the secret to keeping her look updated and exciting is, and surprisingly, it's been right in front of us this whole time.

Kourtney Kardashian's hair secret is...her part! Her stylist, Scotty Cunha, explains to E! Style that switching up where Kardashian parts her hair keeps her look fresh despite its consistency.

Cunha says, "I think the most dramatic way to kind of change up your look and really go for a dramatic look is changing up your part." Whether it's a slick middle part or a voluminous side swept look, Cunha showcases the many ways he's able to update his self-described favorite Kardashian's hair.

Unlike her sisters, Kardashian's trick isn't permanent, doesn't require a myriad of products, and only takes seconds. Basically, it one of the best beauty tips from the Kardashian team, and it's easily the most attainable.

Now, it's hard not to notice when Kardashian changes up her part, and Cunha is right. The looks are totally different and fresh.

Kardashian has been rocking the middle part on the regular lately. It seems to be her signature, and it's easy to see why.

Whether it's a slicked back pony or long locks, the middle part is here to stay for Kardashian.

Whether it's to the left or right, Kardashian's side swept part is definitely a more dramatic choice that's perfect for red carpets.

No matter which side she chooses, it's always a good look.

Kardashian looks great in anything, and that includes when she's not rocking a part at all.

While the star does rock updos and ponytails with middle parts, the pulled back look is also great.

Basically, Kourtney Kardashian's stylist has revealed the most effective, most affordable, and least permanent method of switching up your style. So it's officially time to grab that comb.