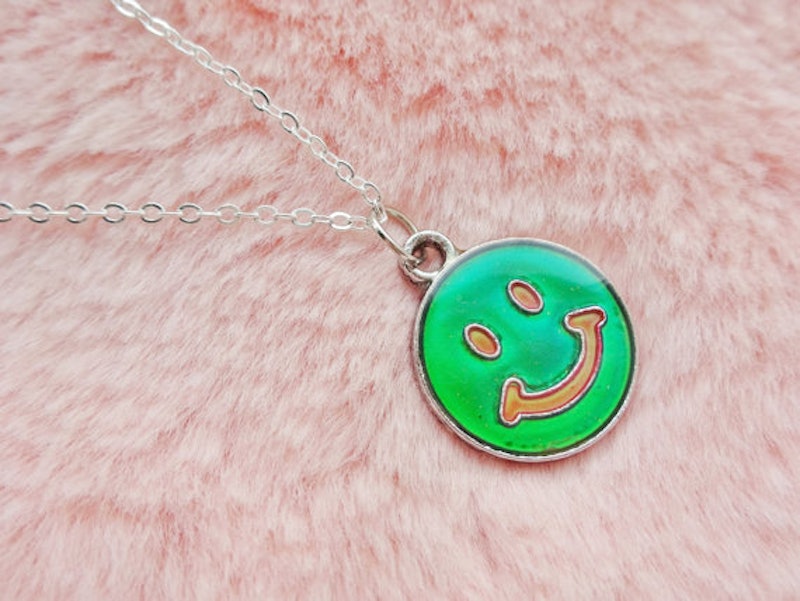 The fashion world's love affair with weird '90s trends doesn't seem to be going away anytime soon. For some odd reason, it's totally hip to adore bizarre styles like fluffy accessories, lace-up jeans, and slap bracelets. But I'm still holding out for the return of glow-in-the-dark fashion and accessories. Although not all trends were created equally back then — and some '90s fashion fads were not quite as cringe-worthy as others — the vibe of the decade was made up of eccentric, novelty fashion that we likely thought we'd never see again.

At the time, it felt as though the fashion industry was trying to do everything all at once by experimenting with weird fabrics and basically turning utterly nonsensical items into stylish ones overnight. I mean, bucket hats as haute couture? Really? Don't even get me started on men's fashion.

Now in 2016, the '90s trend is still going strong and I predict that the next big, nostalgic look du jour will be glowing garments and accessories. Light-up and glow-in-the-dark fashions have been sneaking their way back into vogue. Ashish x Topshop's collaboration (released in May 2014) featured light-up sneakers that caused a stir, glow-in-the-dark hair has been trending this year, and more recently, Claire Danes wore a glowing gown to the 2016 MET Gala.

So before this space age trend hits, here's some inspiration in the form of attire that glowed-in-the-dark for absolutely no reason in the '90s.

Just in case you forgot where your neck was, you had glow-in-the-dark '90s tattoo chokers to rely on. Thank goodness for that!

This tee showcased our obsession with ghosts in the 1990s — thanks Casper — and it would have been awesome for spooking your friends in the middle of the night at sleepovers.

These light-up heels were everything you dreamed of while growing up in the '90s. However, your mom thought they were far too mature to be worn by tween you.

This happy little fella was always cropping up in the '90s, but his (or her, or their) appearance as a glowing, color-changing necklace was the absolute bomb.

This glow-in-the-dark watch was perfect for traversing unknown, pitch black lands in the quest for a midnight snack.

By day, these mood rings could read your mind; and by night, they gave off an eerie glow. If you were lucky enough to have one of these glow-in-the-dark mood rings, you probably believed E.T. would be coming for you soon.

If you had a heart-shaped, light-up necklace, you felt like Sailor Moon IRL.

Considering your mom wouldn't allow you to have light-up high heels, you'd beg her to buy you these light-up sandals, so you could look incredible dancing to the Spice Girls at the school dance.

I don't know any '90s kid who wouldn't have killed for these back in the day, considering they were made out of those glow-in-the-dark moons we used to stick on our bedroom ceilings.

I would have done anything for this ring as a kid since I was completely obsessed with One Hundred And One Dalmatians (the animated movie) and the subsequent live-action remakes. The fact that this ring glows in the dark would have pushed me over the edge into hyperactive territory.

Only the coolest kids on the playground would have LA Gear light-up sneakers. Everyone else would be super jealous because these obviously bestowed Sonic The Hedgehog-style running powers onto the wearer.

Get ready for the glow-in-the-dark revolution, which I predict will light up the fashion industry in the not too distant future.

More like this
12 Nostalgic ’90s Beauty Products That Bring Back All The Feels
By Tyler Atwood and Paris Giles
Netflix Reveals First Look At Wednesday In The 'Addams Family' Spinoff Series
By Bustle Editors
Kenan & Kel Just Reunited At The 2022 Emmys & Twitter Is Overjoyed
By Grace Wehniainen
15 Offensive AF Jokes In 'Friends' That Really Aren't OK
By Tolly Wright, Bustle Editors and Meguire Hennes
Get Even More From Bustle — Sign Up For The Newsletter