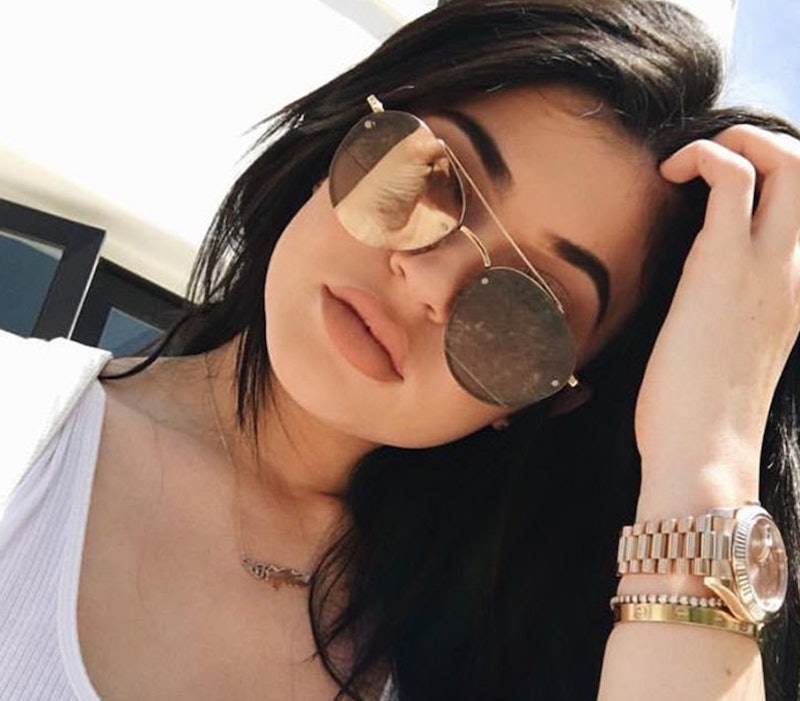 There's a new Kylie Lip Kit coming our way. Kylie Jenner's Kylie Cosmetics debuted Exposed, a new Lip Kit that's a true, peachy nude. It was a surprising moniker for the pretty shade, since fans and customers have been waiting for her name Lip Kit colors after her sisters Kendall Jenner and Kim Kardashian and her mom Kris Jenner. She has already named several of her Lip Kits after her family members: grandmother Mary Jo (the red Mary Jo K), after big sis Khloe Kardashian (the pink Koko K), and biggest sis Kourtney Kardashian (the dark purple Kourt K). She also named one of her Metal Mattes after her nephew and Kourt's son Reign. She even christened one of the Metal Mattes after her own damn self with King K. Why did Jenner go with "Exposed" as the name of this particular lip kit? She hasn't specifically said anything yet, but I've got theories.

First, if there is on thing that holds true about the Kardashians and Jenners, their lives are fully exposed to the media and the public. They invite everyone to keep up with them and into their world via their various reality shows and their social media.

They are master marketers who are exposed at all times. It's the seat of their fame and they have made all of the exposure work for them. So more power to 'em.

This is Jenner's way of owning it. She knows her life is on full display 24/7. She gets it. She documents every moment on Snapchat and her fans lap it up. Why not recognize that in a subtle way?

She is also a style influencer. The exposure pays off — she can't keep Lip Kits or Kylie Glosses in stock. She's repping Puma. She is everywhere she needs to be and her brand is growing. There's no shame in getting cheeky with a KLK name.

Second, and generally speaking, when you are nude, you are exposed. The Exposed Lip Kit is a true nude and it's a really lovely shade. It's really a simple and appropriate name for the color and that could be the long and short of it. Maybe Jenner wasn't getting deep with the naming process here. Both of these theories are entirely possible, though!

Many of the Lip Kit shades have a "K" tacked onto the end of their name for obvious reasons. It seems that is not the case for Exposed. It doesn't need the K. That would be too obvious.

I think I pretty much picked up what Jenner was putting down.