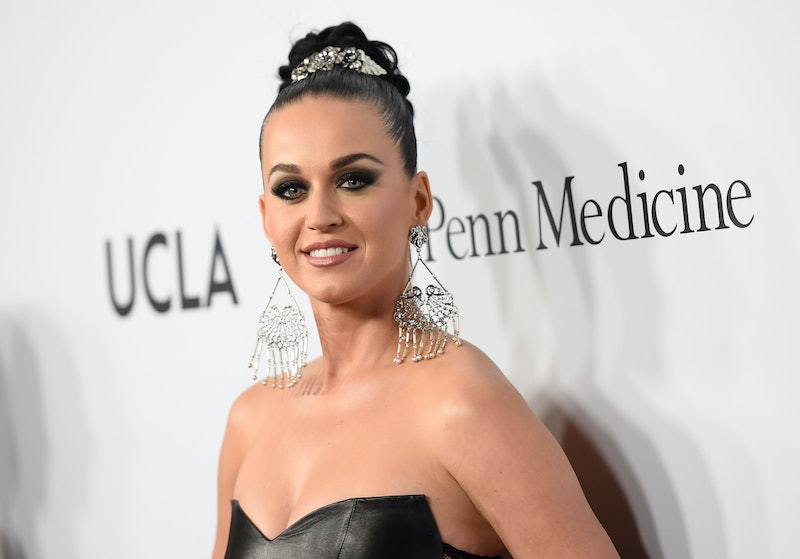 As great as wearing makeup can be, there's nothing quite like the feeling of taking it all off after a long day. But, let's be real — removing your makeup quickly is rarely easy, or even possible. I can certainly remember a handful of times that it seemed like my mascara had seemingly fused to my lashes forever. Someone who seriously knows a thing or two about makeup is Katy Perry. Perry does things like casually bleaching her eyebrows for the Met Gala, or spending over a year creating an entire line of matte lipsticks for CoverGirl. At an event for Perry's CoverGirl Katy Kat Mattes, the pop star spoke to me and other editors about her love of makeup, her beauty routine, and, of course, her new lipsticks.

It's no secret that Perry is known for changing her look. But as someone who both appreciates Perry's belief in the joy of experimenting with makeup, as well as her boldness in trying new trends, I was curious about what hasn't changed in Perry's beauty routine. Her answer? Skin care.

"I had really bad skin — not growing up, but at 23. Right when everything was starting to hit, my whole face went nuts. I think it was the stress and all of the attention," Perry says.

Surprisingly, for someone who wears a lot of different types of makeup very often (and very well, may I add), Perry says she has "super sensitive skin." Given this, she notes that her skin care routine has stayed largely the same over the years. Saying that having already spent "thousands and thousands of dollars on lasers" and dermatologists, Perry tried Proactiv — and has used it ever since, even though she's no longer a spokesperson for the brand.

"I still use it to this day. I have no relationship with them besides the fact that they've helped me so much," Perry says. "I use the exfoliant and a bit of the toner."

Of course, we all know that skin issues are not something that only non-celebrities deal with, but it's still easy to forget that when you take away airbrushing and perfect lighting, famous people deal with annoying complexion stuff, too.

In addition to using the Proactiv cleanser and toner religiously, Perry says discovering an easy way to take off makeup has been something else constant in her routine for the past (almost) decade.

"One of my favorite things I've implemented into my regimen is Shu Uemura oil to take off all the makeup. Because it gets it all off in one swoop. So, you do dry hands and then you put the oil here [on your hands], put it all on your face, and then you get a warm wash cloth...and it takes it all off in like two swipes," Perry says.

A one-step, super easy way to remove all my makeup at once? Sign me up. And, according to Perry, removing all your makeup isn't the only thing the oil is good for.

"I do this before nighttime, so it leaves a nice residue that is kind of like a bit of a moisturizer before you go to bed," Perry says "It's great and I'm like deathly afraid of oils."

Still aren't convinced? Perry isn't the only celeb who is a believer in the oil.

"Madonna's makeup artist, Gina, showed it to me about eight years ago and I was like 'no,' but then she said, 'Madonna does it' and I was like, 'Alright, whatever it is, I'll do it. Fine!'"

And there you have it, a Madonna and Katy Perry-approved solution that means we can all finally stop using 1,000 makeup remover wipes each night.