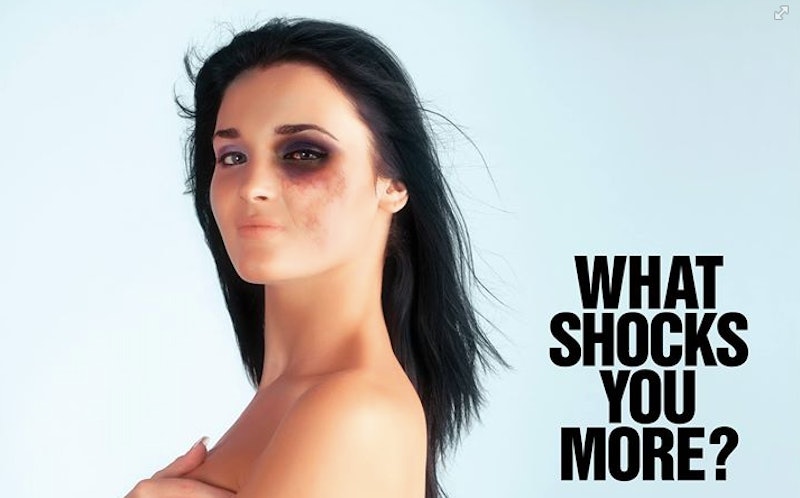 The Lebanese Olympic skier Jacky Chamoun made waves last week when a series of nude photos she once took for an Austrian ski calendar surfaced, prompting Lebanon’s Sports and Youth Minister to launch a full-on investigation into the matter in order to "ensure the protection of Lebanon's reputation." Now, these controversial photos are in the spotlight again, with Lebanese activists using the skin-baring scandal as a way to make a point about domestic violence.

MARCH, A Lebanese organization geared towards educating, motivating, and empowering Lebanese society “to recognize its right to freedom of expression, instill a geniuine respect and acceptance of differences, and expose the negative effect of censorship on society,” has made the controversy central to their latest campaign. New ads show a picture of a topless woman with a black eye under the headline “What Shocks You More?” MARCH doesn’t mince words: “Nudity is a personal choice,” the ad says. “Getting beat up is not.” Here’s what they have to say about it:

“This week, one woman (Jacky Chamoun) was the talk of the town for showing skin. Whether it was expressing tremendous support or displaying great outrage, the Lebanese community was buzzing about her. MARCH has of course supported her, her personal freedom, and her right choose. But what about the other women who deserve the same attention and coverage: victims of domestic violence.”

The week before Chamoun's photos surfaced, a Beirut woman was beaten to death with a pressure cooker by her husband, and authorities neglected to intervene because it was "a family matter." It does seem absurd that the Lebanese government is directing its resources towards "investigating" something as innocuous as a few topless pictures when clearly there are more pressing issues at stake. With that in mind, MARCH teamed up with advertising agency M&C Saatchi with the goal of “[focusing] our efforts on an issue that should matter to every Lebanese who believes in personal freedom, civil rights, and human rights.” They finish with a powerful call to arms, stating, “It’s time that we reassess our values, get our priorities straight, and be the voice of women who have been silenced. Some of whom, forever.”

So, what shocks you more? And more importantly, what can we do about it?

More like this
Black History Month UK’s 2022 Theme Calls For Action, Not Words
By Maxine Harrison
Constance Wu On Self-Doubt, Family Drama, & Her Sister's Unwavering Support
By Constance Wu
Bennifer, Kravis, & 14 Other Fun Celeb Couples Halloween Costume Ideas
By Emma Carey and Brittany Leitner
How To Politely Reject Someone Who Keeps Asking You Out
By Laken Howard and Lexi Inks
Get Even More From Bustle — Sign Up For The Newsletter