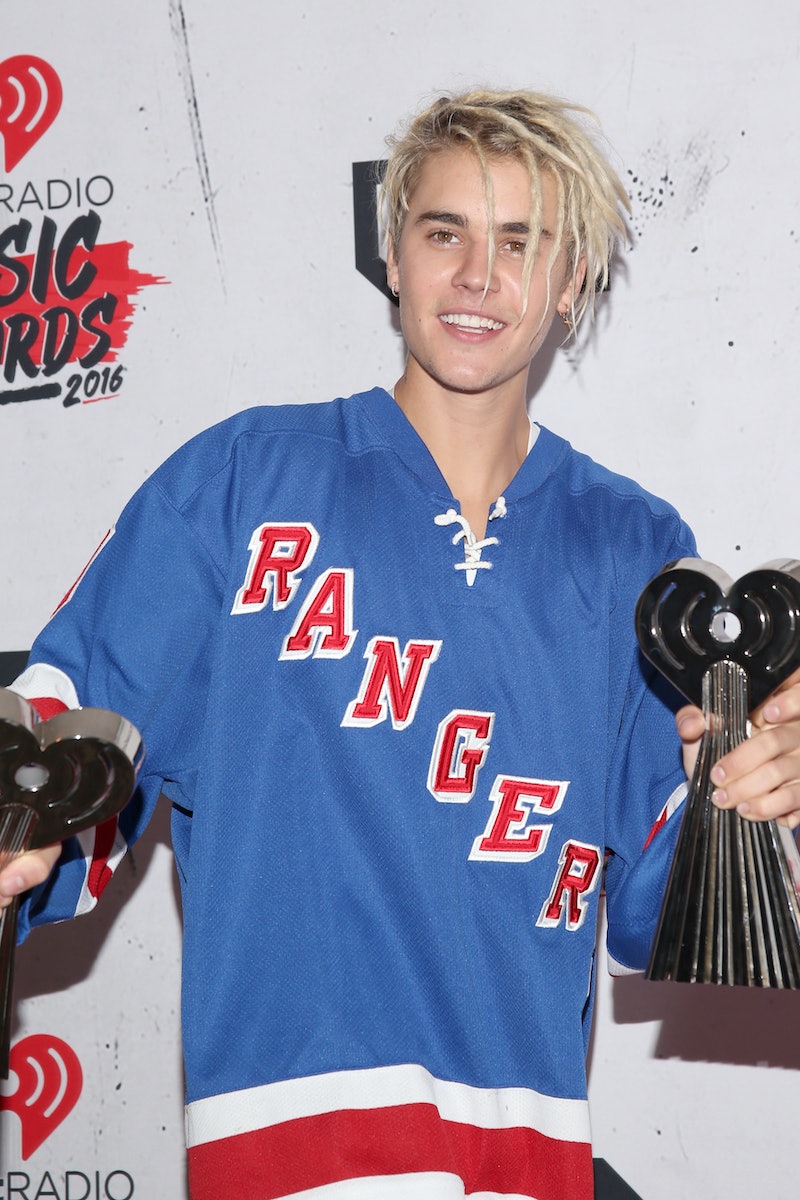 Almost as famous as his changing but iconic hairstyles, Justin Bieber's tattoos are a more permanent case of self expression for the "Sorry" singer. But has his ink been taken to a new level? According to People, Justin Bieber might have a face tattoo. The news went pretty viral on May 7 after two pictures of the star — both on his own Instagram account as well as tattoo artist Jon Boy's — appeared online, each revealing a new marking near Beiber's eye.

The image on Bieber's account was a selfie, while Jon Boy's was a group shot. But neither photo acknowledged the possible new tattoo on the Biebs. The snaps were not close enough to the 22-year-old's face for the adoring and inquisitive public to easily deduce whether he's taken a huge step forward in his tattoo game or not.

Considering that Bieber recently told GQ Magazine that he would not get a facial tattoo until "I'm really old, not super old, but maybe, like, 40s or 50s or something. One above my eyebrow or something small," it's understandable why some folks are doubting the legitimacy of the new ink. However, a source told US Weekly that the musician "and close pal Joe Termini got matching cross tattoos just below their left eyes before heading over to Manhattan hotspot Up & Down."

A quote from Bieber's GQ interview also backs up his enjoyment of face tattoos. As he told the publication, "I think if they're done right, they could be cool, but nothing super crazy all over the face."

The image by Jon Boy from West 4 Tattoo Parlor shows Bieber's cheek looking particularly red and swollen, with a noticeable mark that mirrors the one from his own selfie.

And as for Exhibit B: If you squint, turn your head, and ignore the ridiculously dim lighting of Bieber's selfie, the same mark is visible on the singer's cheek. Only time, and real selfies, will reveal whether this tattoo is real or not. But all signs are pointing to yes.

Personally, I wouldn't be too shocked if Bieber moved his plans for facial tattoos to the present. Ink on young celebrities is all the range right now (see: Kylie Jenner, Ariel Winter, and Paris Jackson) and in order to stand out amongst the crowd, a face tattoo seems like a logical step to take.

After all, it's not like Bieber has to worry about how a face tat might affect his career prospects.

More like this
Hailey Bieber Just Responded To *That* Viral Met Gala Moment
By Radhika Menon and Sam Ramsden
Fermented Skin Care's Barrier-Boosting Benefits, Explained By Derms
By Audrey Noble
15 Hibiscus Tattoos That Bring Tropical Vibes To Your Body Art
By Paris Giles
Everything To Know About Daxxify, The Newest FDA-Approved Skin-Jectable
By Olivia Rose Ferreiro
Get Even More From Bustle — Sign Up For The Newsletter