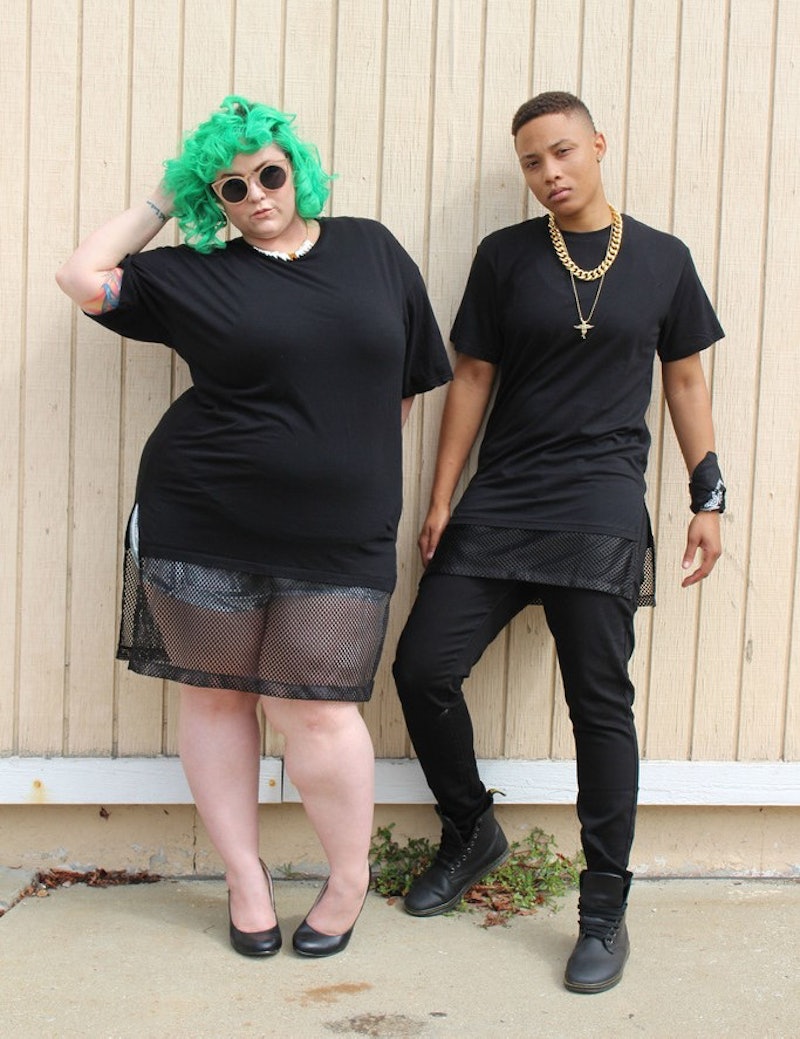 It can sometimes be difficult to decide whether to celebrate small strides made forward for diversity, or lament the folks who have still been left behind. But as Yahoo! Style pointed out, spring 2016 fashion campaigns have been the most racially diverse to date, according to a new report by The Fashion Spot. Personally, I find it hard to dismiss the steps taken by the fashion industry to be inclusive of different ethnicities, races, and identities in its campaigns in a way that really hasn't been seen before.

The statistics for models of color in this season's campaigns should be celebrated. According to The Fashion Spot, spring/summer runways saw 24.8 percent non-white models, while campaigns saw 21.8 percent models of color. Of course, these numbers are still quite low. But they still suggest a 6.5 percent decrease in white models used in high fashion advertisements and campaigns for the season.

To break it down further, 8.2 percent of models cast were Black, 4 percent were Asian, and 3.8 percent were Latina, as reported by The Fashion Spot. Again, these are still low percentages, but they reveal double the amount of Black and Latina models cast compared to fall/winter campaigns only a few months ago.

That said, a victory for one group isn't necessarily a victory for all. Unfortunately, the same report revealed that not a single transgender model was cast in a high fashion ad campaign this spring — in contrast to the campaigns of Hari Nef, Valentijn De Hingh, and Andreja Pejic in autumn/winter 2015.

Despite the rise in popularity of body positivity as well as celebratory firsts for curve and plus models — take Ashley Graham's Sports Illustrated and Maxim covers, for instance — actual representation of plus size women in fashion advertising has come in at a total of six castings out of 422 model appearances in this season's campaign. As of yet, it doesn't seem like the sartorial world is taking plus size modeling as seriously as independent brands are.

The positive changes we have seen will hopefully continue to increase until inclusive diversity can be seen throughout the fashion industry. However, the lack of representation given to marginalized groups outside of race isn't something that can be easily ignored. Particularly for the people who find themselves at an intersection of more than one marginalized category.

When speaking to Aarti Dubey, plus size Asian activist, blogger, and representative for Eff Your Beauty Standards, via email about her opinion on these new statistics, and what they mean not just for fashion representation, but for the real people who don't feel visible, she tells me:

"I celebrate the little strides that have been made [...] but there is so much more to be done. I feel a lot of [high fashion brands] could take a leaf out of indie companies that make it a point to include diversity aside from race. (Which is very important and should be pushed for more visibility.)"

She adds, "Social media (most of it) understands the need for intersectionality and mainstream media acknowledges it as well. There is a long way to go and much to lobby about, and I am hopeful for the future of diversity in fashion and beyond."

Dubey's positivity is what I feel we need to see more of in critical debates discussing diversity and intersectionality. As she mentioned, independent designers are often at the forefront of diverse representation — and often without the press attention that high fashion receives for the same attempts at intersectionality.

With this in mind, I also spoke to Alysse Dalessandro of size inclusive brand Ready To Stare via email. "I think that while body positivity is a mainstream buzzword right now, we are still far from inclusive representation in high fashion. Of the high fashion brands that show at NYFW, Chromat is really the only one that I know of using both transgender models and plus size models in their shows, and Chromat is still a relatively smaller brand," she says.

Dalessandro's hopes for the future of fashion mimic Dubey's: "I would love to see more inclusive representation from all high fashion brands, but I think there's so much more stigma that we have to fight [so] that anyone who is considered outside the beauty standard, whether that be in size, gender, race, or ability, has a place in high fashion at all."

Critical positivity seems to be the best approach to these statistics: Let's celebrate the progress made, but push for better. Let's not simply settle for the changes being made, but demand and create more both in fashion and outside it.

More like this
Berriez Founder Emma Zack On Her Size Inclusive NYFW Show
By Dominique Norman
Androgynous Formal Wear That Will Make You Feel *So* Fancy
By Megan Lasher
An Honest Review of MeUndies Boxers, According To A Non-Binary Person
By Megan Lasher
Prefer Alcohol-Free Perfumes? Water-Based Fragrances Are On The Rise
By Audrey Noble
Get Even More From Bustle — Sign Up For The Newsletter