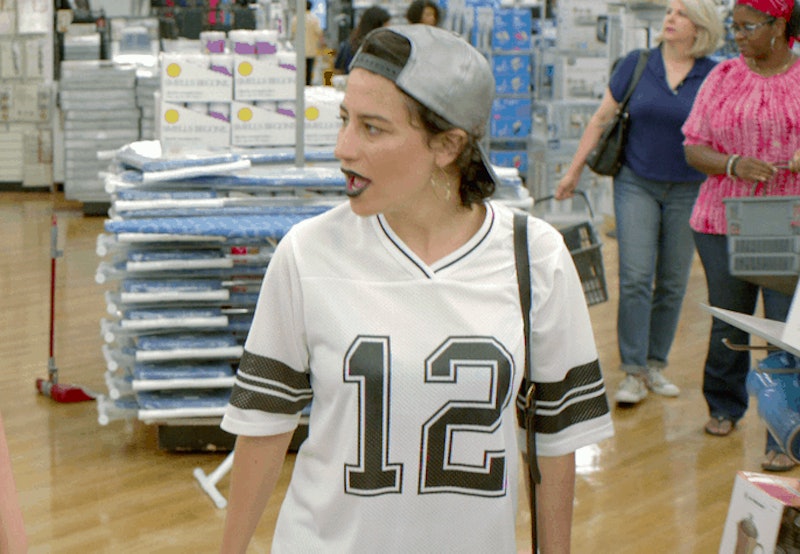 Broad City is arguably one of the most self love-inspiring shows on TV right now. Through Ilana Wexler's fashion choices alone, the series is constantly promoting empowered sexuality and free expression while also de-stigmatizing the female form. In Season 3, the period pants in episode nine signal one of the greatest examples of Ilana and Abbi confronting the ways in which female bodies can make people uncomfortable, marking, at least for me, the most body positive moment of the season.

As the two pals were getting ready to board a flight to Israel, Ilana unwrapped the button-up flannel from her waist to reveal a large blood stain on the back of her jeans reminiscent of a free-bleeding human with a pretty heavy flow. She informed Abbi that she wore the pants to prevent further questioning from TSA officials so she could successfully smuggle weed to their vacation destination, stored snugly in her vagina. The craziest part of the episode, IMO, was that it actually worked. The drug-sniffing dog definitely caught on, but once the officer saw a glimpse at the huge stain, he backed off immediately.

While this scene made me laugh and had me contemplating whether I too could use a pair of period pants to smuggle some cannabis onto the next flight I take, it also made me aware of just how unacceptable the female body's natural occurrences can be to society. However, Ilana's period jeans also demonstrated that we can use these beliefs to our benefit, confidently rocking blood stains on our clothes if we so desire.

Admittedly, it can be pretty difficult to conceive a scenario in which bloody pants could work to our advantage. After all, period blood and all things menstruation are such a taboo subject of conversation that the men in our lives are sometimes downright embarrassed at the prospect of buying us sanitary items. In Elite Daily's 2015 roundup of iMessages entitled "Guys Prove They Have No Clue How To Buy Their Girlfriends Tampons," for instance, one tampon-shopping boyfriend wrote his partner, "Someone just looked at me funny. What do I do?"

Additionally, images portraying blood stains that seem to be menstruation-related are regularly considered obscene, with any portrayal of free bleeding often flagged as inappropriate on the web. The most famous recent example is probably when poet and writer Rupi Kaur's Instagram post portraying a period blood stain was removed from the social media platform in 2015.

When Kaur reposted the image, she wrote, "The girl is fully clothed. The photo is mine. It is not attacking a certain group. Nor is it spam. And because it does not break those guidelines, I will repost it again. I will not apologize for not feeding the ego and pride of misogynist society that will have my body in an underwear but not be OK with a small leak." In Broad City, the security officer's comical dismissal of his drug-sniffing dog's suspicions alluded to very much the same issue, since he was caught so off guard between embarrassment and disgust that the sight of Ilana's bloody denim made him reject his job.

Kaur's photo was part of a series that aimed to interrogate the social stigma surrounding periods — something that she and the ladies of Broad City are clearly very critical of. As a person with a period, I feel this stigma, too. I know the shame of staining the bed with my blood and the panic involved in quickly covering it up before any given partner could see it. I know the anxiety of realizing you've bled through your pants in public, only to be saved by other vagina-owners around you who band together to find something to cover you up. I know the hushed tone we often use when discussing menstruation in public places, and the pains of trying to discreetly grab a pad from your backpack before heading to the bathroom to change.

Want more radical body positivity? Check out the podcast below, and be sure to subscribe to The BodCast for more inspiration!

Of course, we shouldn't have to feel ashamed of a perfectly natural process that our bodies go through each month. Arguably, period positivity is a big part of accepting our bodies. It's obviously really difficult to embrace any facet of body positivism when a misogynistic patriarchy so often gets in the way of us becoming comfortable with that red stain on our jeans. The misogyny is only further exemplified in the way suggestively covered photos of women are all over Instagram, but portrayals of natural functions those same nude bodies go through are taken down.

Writer Erika L. Sánchez touched upon this hypocrisy in a an opinion column for Al Jazeera, specifically pertaining to Kaur's experience: "The company’s decision to censor an image of period blood sent the message that women’s bodies are acceptable — if they’re sexually desirable," she wrote. "That hypocrisy is reflected in the many men I’ve known who will gladly watch violent movies or play homicidal video games yet are disgusted by the idea of menstruation. In this way, the menstruation taboo, like body shaming, is a deeply ingrained form of misogyny. We won’t eliminate hateful behavior toward women until we reject the notion that this biological form of bleeding is shameful."

But in the ninth episode of Broad City Season 3, Ilana clearly demonstrated that she was not ashamed of her period stains. The way she used general societal repulsion toward her bodily functions to her advantage as she waved her red-stained bottom in the dog's face and looked exaggeratedly embarrassed was a huge moment of empowerment. When the world places an unfair taboo on a certain part of your body, it seems like the best and most giggle-inducing approach is to use it for your own gain — much in the way Ilana did.

Following her lead, it's also important to remember to make light of the moments in which you bleed through your pants or drop your tampons on the floor for everyone to see. Over the past few years, I've been reversing my period shaming ways, and embracing it wholeheartedly as a part of my body positivity. I do not curb conversations I'm having about the details of my period in the presence of strangers. I show off my Thinx panties proudly on all my social media accounts. I have sex on my period and bleed all over the sheets in the process — something I've learned to find incredibly sexy.

Ilana's hilarious hi-jinx at the airport this season served as perfect inspiration for me, and hopefully for any body pos period-having human who is looking to reclaim their bleeding vaginas from silly social stigmas. If part of that includes poking fun at the whole thing by using society's general disgust for blood stains to your advantage, then so be it.

Hey, you might as well throw on a pair of period pants for fashion purposes as well. There's no reason why Ilana's blood-stained bottoms can't become a daring sartorial message IRL.