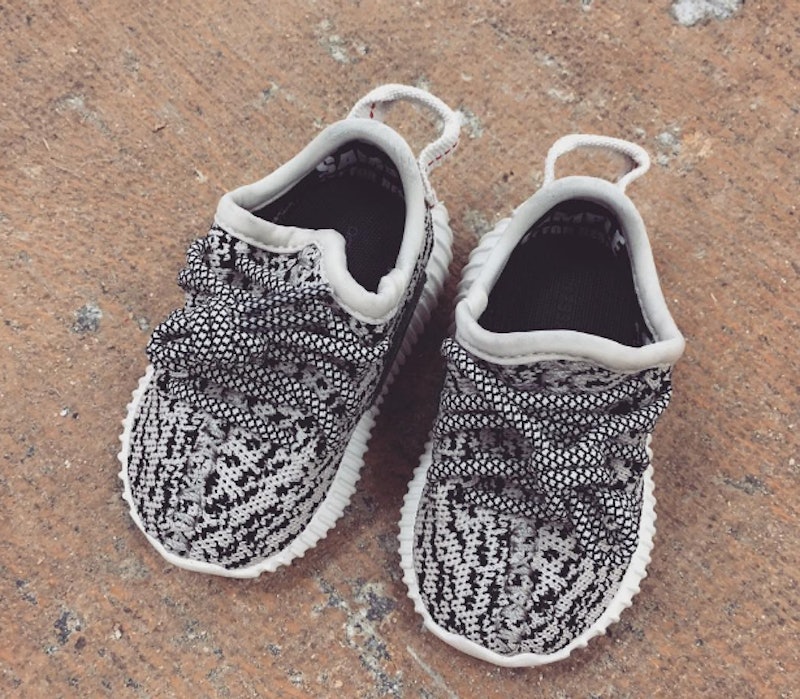 If you lost all your chill this morning when you found out that Baby Yeezys are finally coming to the public, then you're probably wondering when do the Baby Yeezys come out? I mean, given the success of the adult Yeezy Boosts, you know these are going to sell out, so you want to be ready as soon as they drop. Unfortunately — you still have a little while to wait. But better late than never, right?

Because babies deserve to have a seriously fierce shoe game, too, Kanye is bringing Yeezy Boosts to the tots, launching Baby Adidas Yeezy Boosts, and they're so cute, you'll probably want to buy a pair, even if you don't have a kid. They're just so mini and adorable!

The miniature version reportedly comes in three colors: 'Pirate Black,' 'Turtle Dove,' and 'Beluga,' and even though they might be small, they definitely don't come cheap. They are speculated to retail for $120 each, which is pretty high for a baby shoe. Especially considering that your baby probably would rather not be wearing shoes and all. But they're just that cute.

So down to the important stuff: When can you own them? The bad news is that they won't be available until August, according to The Cut, but on the bright side, they exist now, so that's all that matters.

Can you even with how cute they are? And even though they aren't for sale for a while, they're inevitably going to sell out, so at least this gives you time to prepare for the launch so you don't miss out.

They might even be better in baby form. Just saying.