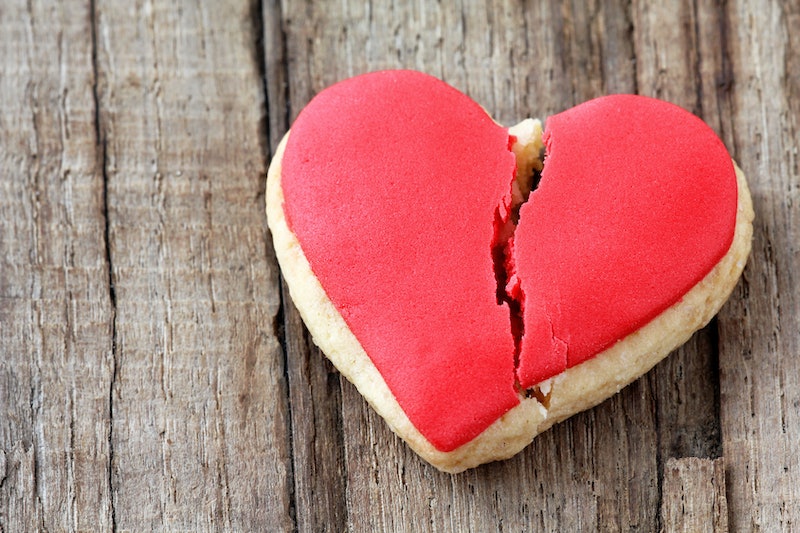 Here’s one for the “duh” department: Rejection hurts. In fact, research has found that the pain of getting “burned” by a romantic partner is similar to the physical experience of singeing your hand on a hot cup of coffee.

But instead of sticking your extremities in a bucket of ice the next time you find out it’s not you, it’s them, try seeing the situation as a chance to get stronger and wiser. We’ve rounded up eight surprising ways getting rejected (by a new flame, a long-time partner, or anyone in between) can make you a better person — for life.

Been dying to write a book, launch a web project or get back to painting? The best time to do it may be right after you get dissed. In some cases, people who feel rejected or left out end up more creative than those who feel accepted. That’s probably because those who already believe they’re independent are more open to new ideas once they get the door slammed in their face. So give yourself some time to grieve, and then put your rejection-inspired brilliance to work.

2. It’s a chance for self-improvement.

I'm not suggesting you change yourself to make yourself more appealing to the dude who dumped you. However, it is worth reflecting on what you learned from your time together, relationship expert Dr. Carmen Harra writes at The Huffington Post, so you can approach future relationships differently. Maybe you won’t go for a guy you know is wrong for you because he's there, and he's into you. Feeling especially gutsy? Make like this woman, and ask the guys who rejected you for feedback. (She ended up finding out that people perceived her as hard to read.)

3. Sometimes we need a reminder that we’re human.

And sometimes being human sucks. There’s no question that it hurts when someone breaks up with you or simply turns you down for a date. But, as Romane Stewart puts it at PicktheBrain, rejection also lets us know that we aren’t perfect and that we can make mistakes. It's the moment when you recognize that you aren't necessarily any better at relationships than the people you’ve rejected in the past. Eat that slice of humble pie, and stay open to learning about life.

4. You’ll get better at reading emotions.

Here’s a kind-of-weird benefit of romantic rejection: According to one study, people who thought about getting rejected were better than others at picking out sincere smiles. That might be because the virtual reject-ees were so interested in being accepted again that they paid special attention to the way other people were acting. How does this psychology apply to you after a person you're falling for tells you he’d rather just be friends? (Ouch.) Maybe the next time you go out, you’ll be better equipped to notice the people who seem genuinely friendly and interested in you — and in a better position to find an SO who really appreciates you.

5. It allows you to (finally) stop obsessing.

Will he call? Does he think I’m annoying? Should I have worn the red dress instead of the blue? We can drive ourselves (and our friends who have to listen to us) crazy trying to figure out what the other person is thinking and feeling about us. Getting an honest “I’m just not that into you” stings, but it puts an end to all of the analysis, writes Kovie Biakolo at Thought Catalog. Now you move on to a new stage in your romantic life — even if it takes a few teary viewings of The Notebook to get there.

6. Now there’s proof that you put yourself out there.

Some people meet the person of their dreams as a teenager and live happily ever after. (They’re called Disney princesses.) As for the rest of us, if you’ve never been heartbroken, stood up, ignored, or hurt in some way, you’ve probably never really been on the dating scene. Blogger Chase Jarvis points out that getting rejected is like a strange way of knowing that you’re doing something right — that you’re meeting enough people and having enough romantic experiences.

7. You’ll be more confident in the future.

Believe it or not, there's a game designed to help people cope with rejection. It's called Rejection Therapy, and the main idea is to try as hard as possible to get rejected. The point is to practice getting turned down until we simply aren’t afraid of it anymore. Sometimes the dating scene can feel like a game of Rejection Therapy, and just like the game, it ultimately makes you stronger. No one wants to be blown off by 30 guys in 30 days, but the more you get turned down, the less hurtful it becomes. And the easier it is to enter any romantic situation feeling at least a little more confident and self-assured, knowing you'll be just fine no matter what happens.

Right, so the day the guy you’re dating gchats you to tell you he met someone else is not the day you’ll laugh hysterically about it. But someday soon, you’ll be at a dinner party with the new person in your life, surrounded by good friends and good wine, and everyone will be swapping breakup stories, and you’ll just have to tell them all about the time you were broken up with on gchat. People will laugh and say that’s the best one they’ve heard in a while, and you’ll laugh, too. Your new BF or GF will lean over and kiss you and say, “You’re so funny,” and you’ll be thankful for the gchat jerk after all.

More like this
10 Ways To Be More Empathetic To Your Partner
By Raven Ishak and Lexi Inks
6 Dating App Tips To Try If You're Looking For A Serious Relationship
By Lexi Inks
How To Politely Reject Someone Who Keeps Asking You Out
By Laken Howard and Lexi Inks
Are Quality Time & Gift-Receiving Love Languages Compatible?
By Lexi Inks
Get Even More From Bustle — Sign Up For The Newsletter