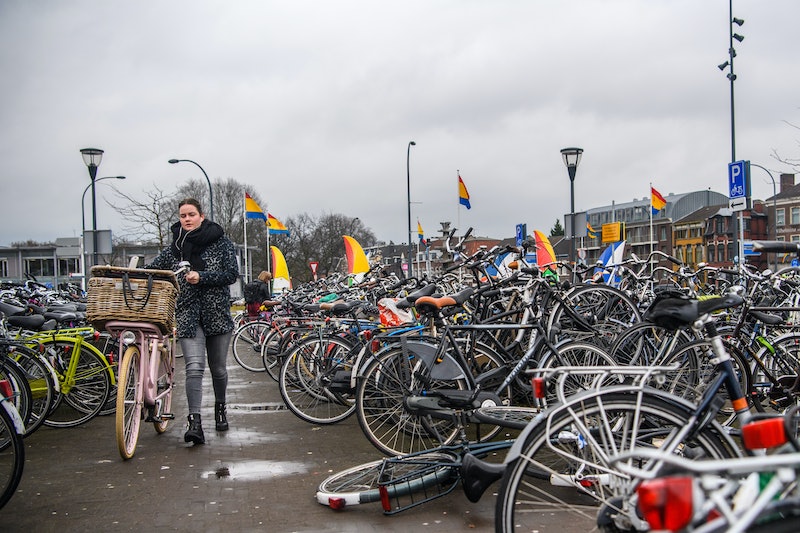 My father taught me how to ride a bicycle.

Circling around the empty weekend schoolyard, we were a postcard for normalcy. I felt a distinct comfort sensing that my dad was able to fulfill his expected fatherly duties. I don't recall the day when my training wheels were removed, or the moment when he finally let go. What I remember is the simple task at hand on those Sundays, and the ease we once felt together. Then I hit puberty.

My ex-boyfriend Ethan taught me how to ride a bicycle in traffic.

I don’t know about this, I’d tell Ethan. I'm a dangerous mix of clumsy and aggressive. I think it's a Jewish thing.

Your ears and eyes are your best weapon, he'd reply with all the self-assuredness of a goy from a happy family.

Ethan taught me how to switch gears; hand signals for turns. He lubricated my chain after every rain. He put air in tires and sanded a part of my bike I didn't care to learn the name of. When racing pedals felt claustrophobic, he unclipped my feet.

Unemployed, I stayed at Ethan's apartment and learned to busy myself. I'd bake him cookies, do our laundry, and eagerly await his return from work. I was an only child playing dress-up. My bike mostly sat in the corner, unless we went somewhere together.

I grew bored quickly. I got a desk job and came to savor riding my bike to work. On Martin Luther King Jr. Boulevard, there was a lane marked just for me. I didn’t have to wait for the bus, pay for gas, or even stop for red lights. Except for the job and the relationship that increasingly made me want to scream, I was free.

One day, I was feeling especially aggressive.

I needed to make a left turn, so I cut in front of a car and was rear-ended at about two miles an hour. I was thrown from my bike onto my face.

Two handsome men immediately came to my aid, like extras on a movie set. The driver looked pale. The accident was my fault, but as a small woman crying, I was innocent.

Who can you call to pick you up?, the driver asked delicately.

Minutes later, Ethan zoomed up in a car. Rarely angry, he towered over my assailant menacingly. I sensed this was as close as I’d ever get to two men fighting over me, and I was grateful for the experience.

The man agreed to pay for half the damage to my bike, and I spent the night in bed with Ethan, watching the romantic comedy of my choice.

It was the last time I remember hoping I wouldn’t break up with him.

When I moved from California back to New York City on my own, a bike was out of the question.

I'm a dangerous mix of clumsy and aggressive, I'd explain to friends like a washed-up comedian.

I got a new job, and the commute by subway was a pain. I needed a bike again.

My new boyfriend Alex helped me find a bicycle on Craigslist. It belonged to a woman on the Upper East Side who had raced with it but didn’t need it any longer.

She's pregnant, her husband explained. I bought it.

Alex’s handsome shoulders moved just the way they should as he attached a mirror to my handlebar. Next up was the lock holster, which I’d lost one of the screws for. Alex stole me a new one from the hardware store.

The screw didn’t fit, but Alex was determined. I watched him swear as he fiddled with the device and began to sweat. I could sense he’d fail but was glad he was stubborn. Watching a man fulfill one expectation of his gender, while simultaneously failing at another, is disquieting.

Finally, the holster broke. Defeated and sweaty, Alex put his head in my lap. I stroked his hair and thanked him for the side-mirror. It was mostly all I needed, anyway.

I wondered if I loved him.

By July, it was time to ride to the pool. I wore a low-cut floral dress.

You look provocative, Alex said in a tone half-admiring, half-baffled.

You look beautiful, he corrected.

We rode to the pool, and as we passed men, I noticed them glancing at my bent over décolletage. I hoped Alex noticed them looking. I rode ahead of him, just to remind him that I was still free and sexy and belonged only to myself. The sun agreed. I was a beautiful young woman on a beautiful blue bike, in a beautiful dress with yellow sunflowers.

Ever since Alex and I tried to break up, my bike seems in constant need of maintenance. My brakes squeak; my tires could use air.

The night we said goodbye for the first time, Alex gave me a new lock-holster he'd ordered to replace the one he'd broken.

Instead of figuring out how to attach it, I carry the U-lock around in my backpack. It's an impractical and heavy decision. Alex still offers to reattach the holster, but I can't seem to commit.

Go to that bike maintenance class for women, he used to encourage me.

I said I would, but knew I would rather knit a sweater, which is another thing I have no interest in doing.

If I were my own boyfriend, I would be very turned off by my ineptitude. But I am a woman. A woman who can pay skinny boys who work in shops to fix things for her.

When I stumble bleary-eyed out my door in the morning, I see my bike and feel a wave of fear.

Will I really travel four miles using only my body and this object? It feels, momentarily, overwhelming. What about that one hill where my legs hurt, or that 10-minute stretch of Kent avenue where the scenery doesn’t change? What if something comes unhinged?

Hoisting the frame onto my shoulder, my body answers doubt: Of course I will ride my bike. I ride my bike every day.

a. When I pass a man who is riding the opposite direction as me, we lock eyes. I find comfort in this ritual of the mutually assured bike checkout; sense that I’ve fulfilled some expectation of my gender to look appealing in all moments. Pedaling vigorously, I sometimes wonder if I appear harsh or pretty or both.

b. When a man passes me on his bike, I often feel an irrational anger toward him. I'm sure he's passing me just to prove that he can, and inwardly curse him. These men are in my way, they always need to be in my way.

c. When a woman passes me on her bike, I am much more likely to try to catch up to her.

d. When I pass a man on my bike, I worry he'll catch up with me, and prove his body superior all over again.

e. When I pass a man who I know will not catch up with me, I often worry I've harmed his ego.

f. When I pass a woman on my bike, I want to tell her I’m not trying to be competitive.

g. Sometimes, I am being competitive.

i. Fundamentally, I tell myself, I am free.

More like this
The 19 Best Tweets & Memes About Bisexual Awareness Week
By Lexi Inks
Black Women's Equal Pay Day Highlights An Upsetting Problem
By Brandi Neal
10 Ways To Be More Empathetic To Your Partner
By Raven Ishak and Lexi Inks
Think Your Partner Is Cheating? These Tarot Cards May Confirm Your Suspicions
By Kristine Fellizar
Get Even More From Bustle — Sign Up For The Newsletter