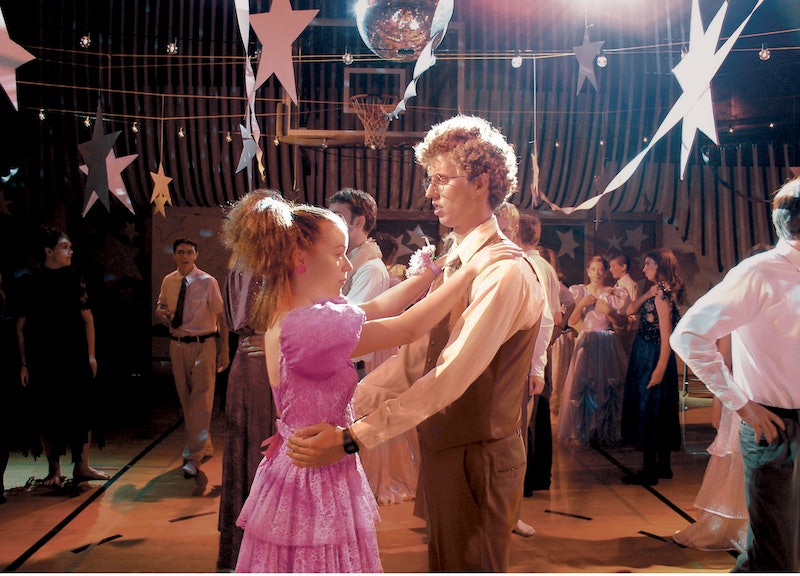 While high school is about many things — the friends that make your clique, the cafeteria room hierarchy, the posters that decorate your locker, the fashions you wear — there's one thing that embodies it: prom night. There were things you had to do on prom night to make it special, memorable, and absolutely perfect. After all, sitcoms and after-school specials taught us since grade school that this would be the number one most important event in our teenage years. It's when high school would come to a close, you'd fall in love for the first time with the quarterback of the football team, and lose your virginity (as per all those teen movies). As you can see, prom was, and remains, a huge deal.

So was it any wonder that we stressed out about a myriad of things on the big day? My school, for example, gave all the senior girls half a day off on the day of the dance in order for us to start getting ready. After all, it takes a long time to let that body glitter and silver eyeshadow settle in. But with a lot of pressure comes big expectations, which means that there were certain things we might have demanded be fool-proof. Shall we explore them now? Below are 11 things that seemed more important than anything else in the world come prom time.

1. Having Your Promposal Documented

Could you even imagine the crushing feeling you'd have if your friend didn't quickly take a snap of your date promposing to you in front of your whole math class? You'd disown her — she would have failed in her number one friendship-anointed duties.

2. Getting Your Curls JUST SO

You've researched your hairstyle for months, and weighed the pros and cons between up-dos and down-dos. You've practiced curling your hair at home, and even contemplated whether you should grow out or cut yourself some bangs. This has been agonized over for weeks on end, so the hairdresser better not give you some Julia Stiles monstrosity from 10 Things I Hate About You. Or I swear to God.

This was especially tricky if you didn't have a parlor staircase at your home. God, why didn't your parents plan ahead when they bought their house? Like, they knew they had a daughter and this moment was in their future. Honestly, the lack of responsibility in some people.

4. Not Wiping Out In Your Heels

Whether you knew how to strut in them better than RuPaul or you were shakier than a seaman on deck in the middle of a storm, the number one goal that night was to not wipe out; not even once.

5. Getting That Perfect Couple's Photo

Yes, your mom would take about a million and one photos of you and your date in front of the fireplace, but you needed to capture at least one that summed up the undying, intense love between you and your boo. Granted, there was a big chance the two of you would break up before the year was over, but these were the rules and regulations of prom.

6. Making Sure Your Date's Tie Matched Your Dress

If it's even a shade off, this whole night is ruined. RUINED.

7. Having Just The Right Amount Of Body Glitter

You were going for a Victoria's Secret glow, not an exotic dancer radiance. Also, how awk would it be if you pulled away from your date during a slow dance and his tux shimmered like a disco ball?

8. Having Amazing Tunes In The Limo

That limo would set the stage for the whole night: It was like the pre-game party. If there were lame tunes that got nobody going, you were all going to get out of the car feeling less than energized. That is exactly why you had a backup playlist synched on your phone, just in case.

9. Making Sure Your Makeup Didn't Run On The Dance Floor

Otherwise shelling out big money for that makeup artist would have been for moot. Also, fingers crossed one of your fake eyelashes didn't end up in your soup, or something as mortifying as that.

10. No One Having The Same Dress As You

If you walked in there and some other girl had the same gown on as you, let's just say things would get intense. Fast.

11. Getting That Perfect Prom Kiss

Whether it was in the middle of the dance floor as some romantic ballad pulsed on, or at the after party when you were a couple of solo cups in, getting that perfect prom kiss was what prom was all about: Romance-novel-level type of love and pageantry.

Regardless of whether or not you hit all those points during your own prom, I'm willing to bet it was still amazing. And the reason I say that is because whether it was lame, full of hiccups, or it went as smoothly as you'd hoped, it gave you plenty of wonderful memories.