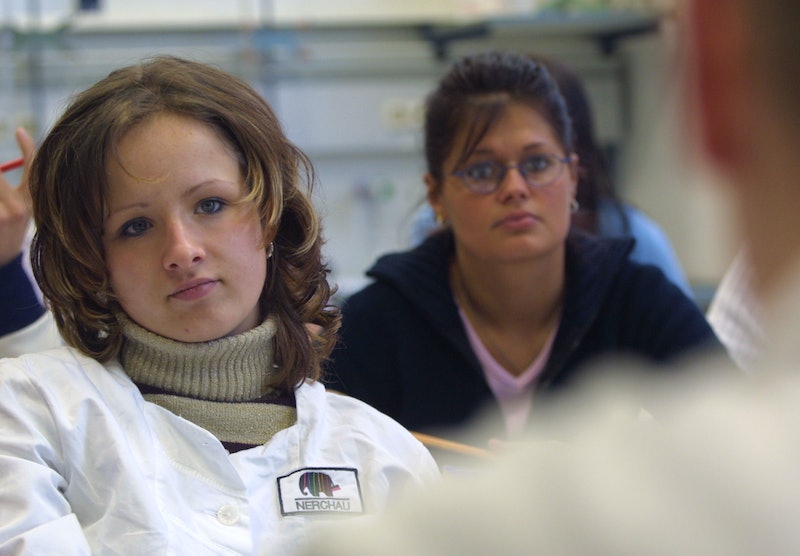 In recent years, the tech industry has been under pressure to hire more women in order to close its massive gender gap. And they have been trying, but as a recent Washington Post article points out, the problem might not be as simple as hiring more female candidates in tech. The industry might have to actively stop scaring some applicants away.

The world of tech can look a lot like frat-boy culture sometimes, and it's not exactly inviting to women. At Dropbox, conference rooms were until very recently given names like The Bromance Chamber and The Break-Up Room. Former employees reported that at all-employee meetings, the only people to speak were men. And at many tech companies, interview questions during the hiring process speak to a boys' club culture, things like, "If someone came in right now and announced that the zombie apocalypse had just started outside, what would you do in the next hour?" It's not overtly sexist, but it does speak to the type of person the company is looking for, someone who fits in with the dude-bro atmosphere.

The result? Tech companies may not be keeping women out of tech by declining to hire them; they might be actively scaring them off.

If tech companies want to get serious about hiring women and closing the gender gap, they need to take a long hard look at their own cultures. Hiring women, or wanting to hire women, doesn't automatically make a company the sort of place where women want to work. And shockingly, women are more interested in finding a job that's right for them than they are in helping tech companies look good. Strange, no?

Maybe there are companies out there that haven't been hiring women but are actually awesome places for women to work. Maybe. But in my experience with life in general, spaces that don't include women are generally not friendly to women. Either they started out that way, or they've become that way due to the absence, but either way it doesn't really matter. They aren't female friendly. And I can't imagine the tech industry is the exception to this trend.

Agreeing to hire more women is easy, but it won't end sexism in tech. Taking a long hard look at yourself, your unexamined assumptions, and the company culture you maybe didn't even notice you had — those things are hard. Trying to look at something from outside your own place of privilege is hard. Change, real change, meaningful change, the kind that doesn't come with a simple memo to HR, is hard. But ultimately these are the things that will change sexism in the tech industry. Or sexism in media or business or publishing or anywhere.