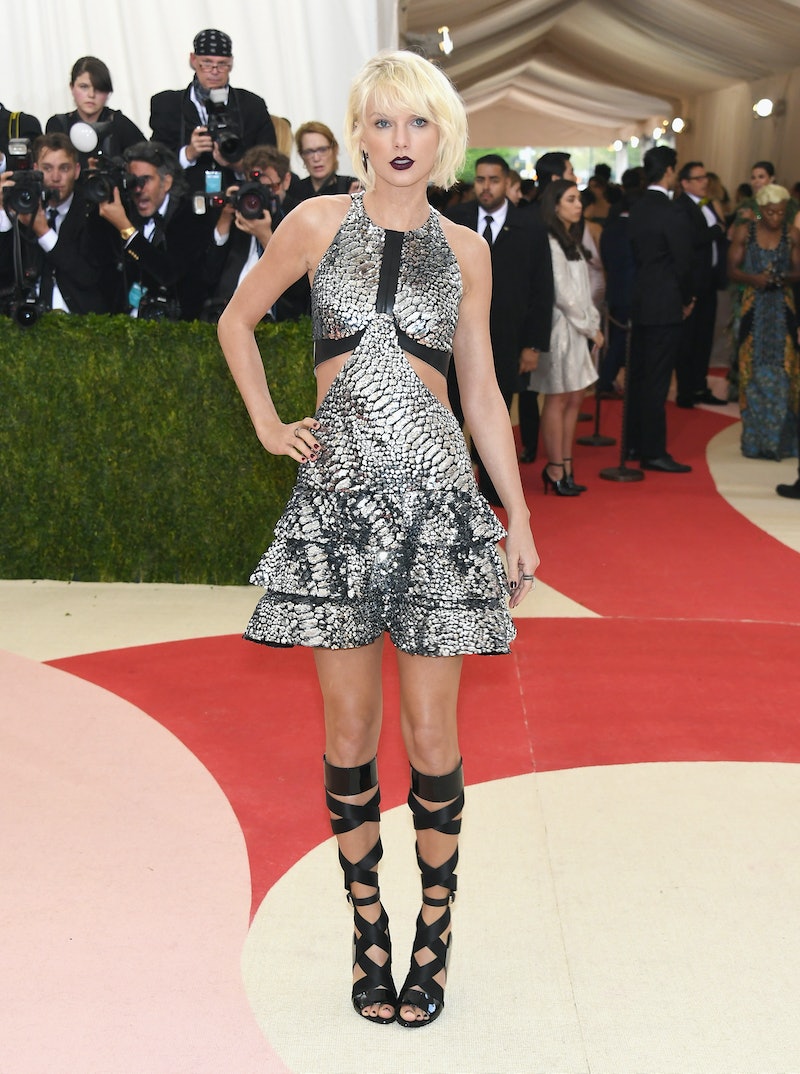 As pop culture fans, we often get to watch celebrities mature and evolve in front of our every eyes, and no transformation has been quite as dramatic as that of T Swizzle. The songstress has managed to go from girl-next-door to edgy rocker chick practically overnight, successfully reinventing not only her style but her whole image. Taylor Swift's 2016 BMI Pop Awards outfit was so '90s, further solidifying her drastic style evolution. Say goodbye to that classic red lip and hello to the new and improved Tay Tay.

The 26-year-old stepped out to the BMI Pop Awards in Los Angeles on Tuesday night sporting a look that departs only further and further from her typical style. The pop star paid major homage to the '90s with a fitted velour gown complete with a draped neckline, super thin spaghetti straps, and a blinged out choker. Chokers seem to be her accessory of choice ever since she claimed them to be the new flower crowns at Coachella. Her hair and makeup were super '90s too, comprised of tousled platinum blonde tresses, shimmery eyes, and a bubblegum pink pout. She looks like the grungy chic version of Cher Horowitz from Clueless, and it's seriously epic.

Feast your eyes on the unique look.

Taylor, is that you?!

In the spirit of style evolutions, let's compare old Taylor with new Taylor, shall we?

No more skater skirts and sparkly jackets, Taylor is all about sexy edginess now.

She has swapped her signature red lip for a much deeper, broodier color.

Girly co-ords are a thing of the past. It seems punk-ish plaid is more her thing now.

More like this
Everything To Know About Taylor Swift’s 10th Studio Album, 'Midnights'
By Grace Wehniainen and Jake Viswanath
There's A Taylor Swift Easter Egg In Ryan Reynolds' 'Deadpool 3' Teaser
By Marina Watts
Taylor Swift’s Latest ‘Midnights’ Look Went Heavy On The Glitz
By Allie Fasanella
Christian Bale Sang With Taylor Swift & His Daughter Can't Believe It
By Radhika Menon
Get Even More From Bustle — Sign Up For The Newsletter