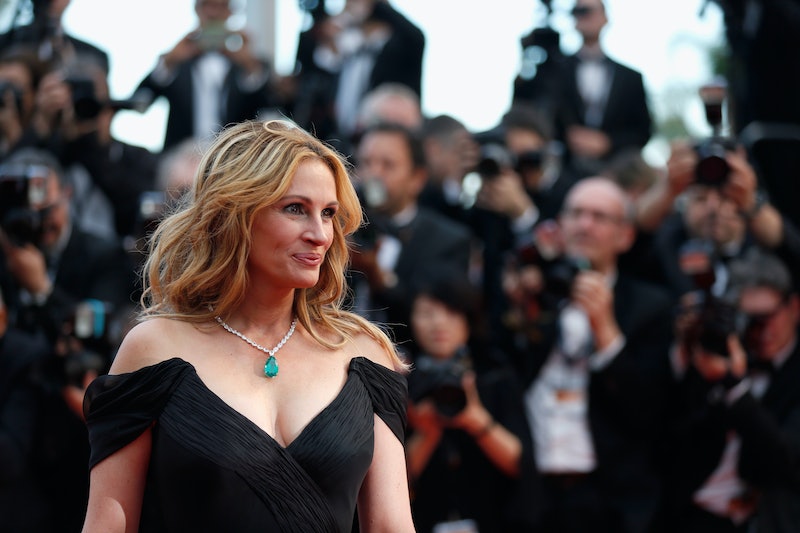 Anytime an event is set in the south of France, you can pretty much assume that the fashion is going to be impeccable. This is definitely true of the Cannes Film Festival, but there’s one glamorous Hollywood gal who definitely broke a red carpet “rule” while in attendance, and I absolutely love her for it. Julia Roberts ditched her heels at the Cannes Film Festival because I don’t care what anyone says — it’s hard to run in heels.

That’s exactly what Roberts needed to do, too. According to PopSugar, while at the premiere of Money Monster, she needed to quickly get up a flight of stairs to pose with her co-stars. What do you do when you need to get somewhere in a hurry? That’s right, ladies. You ditch the shoes.

While her black peep-toe heels were a lovely accompaniment to her flowing black gown, I don’t blame her one bit for going without them. The film festival is about celebrating cinema, after all. So, smiling and posing with your co-stars is much more important than abiding by any kind of red carpet shoe policy, if you ask me. Roberts isn’t the only person who’s kept it real at such a formal event, either. Get a glimpse of her beautiful barefoot moment along with seven other majorly down-to-earth red carpet moments.

First of all, can we just talk about how gorgeous she looks (with her shoes on)?

She was just as stunning (but way more comfortable, I'm sure) when she took the stairs without those bothersome heels.

She's the master of no-shoes-on-the-red-carpet style, as far as I'm concerned.

Carol Burnett rocked cozy UGG slippers down the red carpet at the SAG Awards because she is all of us.

After suffering a wardrobe malfunction, Jenner had to hit the Glamour Women of the Year awards in sneakers and a jean jacket, but, of course, she still killed it with this look.

Schumer beats the heat by using Secret deodorant to prevent chafing, and I don't know about you, but I couldn't be more glad she shared this tip. It's going to be a long, hot summer, you know?

There was no tux to be found on Bernie Sanders at the WHCD. He chose to stick with his typical style, and there's nothing wrong with that!

Alamuddin struggled to make sure her dress was flowing just right in all of the photos. Because it takes a little bit of this...

Chrissy Teigen was one step ahead and had her husband do all of the train-perfecting for her. Major #RelationshipGoals, am I right?

Josh Ostrovsky, a.k.a. "The Fat Jewish" wore a majorly trendy (yet understated) ensemble to the White House Correspondents' Dinner, because nobody keeps it real quite like he does.

The red carpet isn't exempt from a little realness from time to time because while they may be all dressed up and idolized, celebs are no different than the rest of us.