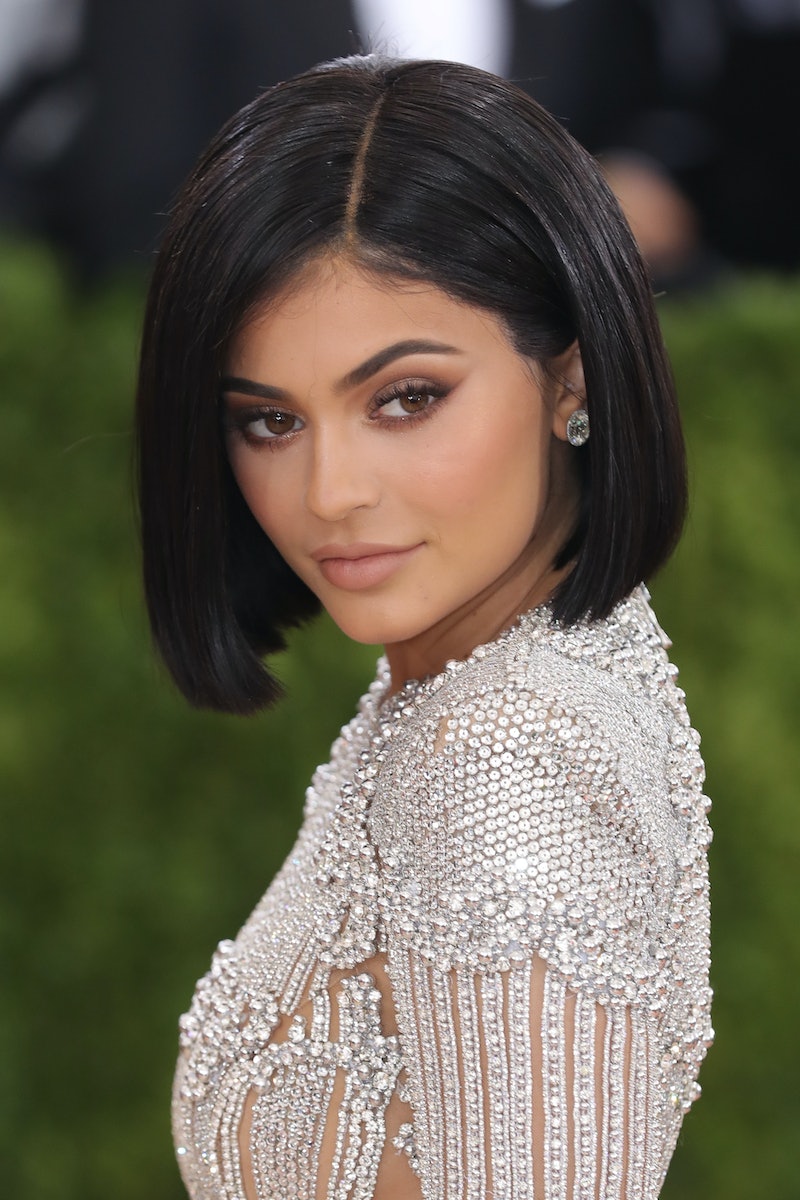 I think it's safe to say that Kylie Jenner's name has become synonymous with lips — and not just because of her infamous pout. Jenner's Kylie Cosmetics has basically taken over the lippie world, and she's hosting a giveaway to celebrate. So, finding out how to enter Kylie Cosmetics' Giveaway is of the utmost importance when Jenner is giving away a full 100 glosses, mattes, and metals. Basically, if you've been eyeing a Lip Kit, here's your chance to finally grab one.

Jenner's eponymous brand Kylie Cosmetics has seen massive and rapid success from its initial launch in November. The brand originally began as three matte, liquid Lip Kits — Dolce K, True Brown K, and Candy K. The lipsticks sold out in minutes on the reality star's website, and those kits were quickly followed by shade after shade of Lip Kit. From the deep burgundy purple of Kourt K to Jenner's latest Lip Kit shade, Exposed, she's definitely made a mark.

Jenner hasn't just stuck with her signature Lip Kit, though. Instead, she has branched out into new formulations. First, Jenner announced her Kylie Glosses, and she didn't just launch them. She filmed an entire "Glosses" music video for the occasion. Next, the star decided to majorly switch up her brand with her metal mattes. Jenner's metallic matte liquid lipsticks added a bit of fun drama to the Kylie Cosmetics collection.

Now, it seems like Jenner is celebrating her success and the upcoming release of the Exposed Lip Kit. Jenner is hosting a Kylie Cosmetics giveaway on Friday, May 13. This just happens to coincide with the restock of the original Lip Kits, and the release of Exposed. Plus, the Kylie Cosmetics giveaway is the biggest yet! Jenner will be handing out 100 glosses, metal mattes, and Lip Kits to fans.

So how do you enter the Kylie Cosmetics giveaway? To enter, you'll need to be a current subscriber of Kyliejenner.com who subscribed to the site on or before May 10 of this year. If you've done that already, head over to the site, fill out the giveaway form on the website, and bam! You could be one of the 100 lucky people to snag a Lip Kit, gloss, or metal matte. Hurry up, though, the giveaway ends Friday at midnight PST.

If you're one of the many who haven't had the chance to get their hands on a Kylie Cosmetics products, this may be your chance to not only snag one but to get one for free!