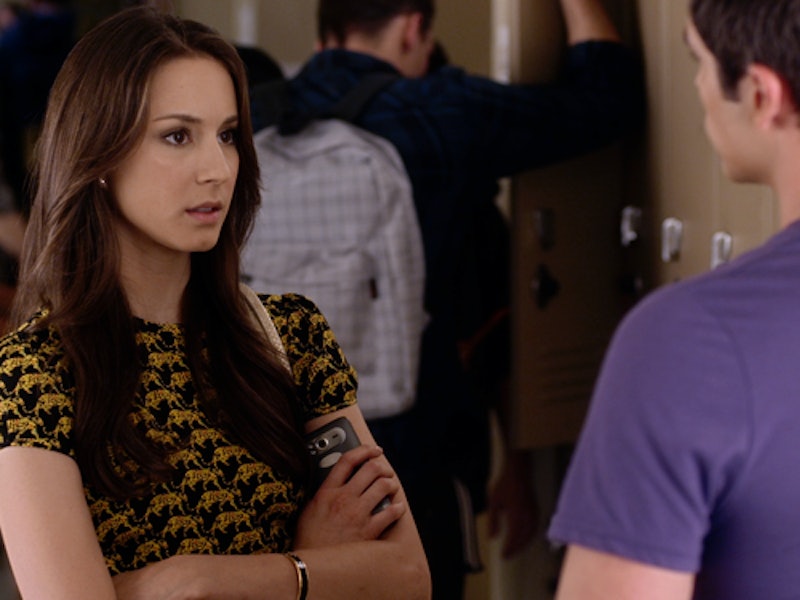 The costume designer certainly made Aria the edgier of the Liars with crazy prints, lots of leather, dark makeup, and huge bold earrings. She is also the smallest of the group, so high heels are often employed to continue the dark, sexy look that Aria has maintained throughout the show. The leopard print makes us associate Aria's style with a sort of fiercely feminine vibe in comparison to Spencer's preppy look, Emily's sporty look, and Hanna's "Barbie" look.

Yet, the girls have been known to mimic each other's elements of style from time to time. Hanna will don some athleisure, Emily will glam it up, Spencer will get a little edgy (remember when she wore the black hoodie?), et cetera. So all of the Liars have worn leopard at some point, and then some. Here is just about every time the print made an appearance on one of the characters.

This dress packs a little punch into an otherwise pretty standard leopard print.

Go out and make some bad decisions in teal leopard!

The belt makes this flowy leopard print shirt able to transition from day to night.

A classic creme leopard is accented by silver triangle studs for an edgier look.

Spencer Hastings is wearing actual leopards on her shirt for a cool twist on the classic print.

Hanna's girlish looks are still intact because of the bow, but this is a little more Aria-esque than her normal outfits.

Mona's turquoise leopard sweater is just sweet enough to be work appropriate, but fierce enough to go out in.

This leopard mini can pair with almost anything, but this look slays.

These leopard PJ's are ferociously comfortable.

I'm seeing a bit of an obsession here, folks.

This bold and striking dress is softened by the black Peter Pan collar. Still, not a usual Hanna thing.

Yes, Aria Montgomery is wearing a leopard print mini with a shirt with two actual leopards on it. Wows.

Subtle leopard works super well for Emily. Maybe Hanna should take a page from her book!

I think A could easily find her in this.

Leopard is perfect for the holidays!

Season six Aria has revamped her leopard wardrobe and it looks a lot classier!

More like this
Phoebe Dynevor Serves ‘Bridgerton’ Underboob In Stunning Floral Gown
By El Hunt
J.Lo's Micro-French Manicure Has A Fun, Sparkly Twist
By Olivia Rose Rushing
The Biggest Fashion Moments Of Paris Couture Week 2023
By Dominique Norman
10 Times Haley Lu Richardson Dressed Just Like Portia
By Dominique Norman
Get Even More From Bustle — Sign Up For The Newsletter
From hair trends to relationship advice, our daily newsletter has everything you need to sound like a person who’s on TikTok, even if you aren’t.