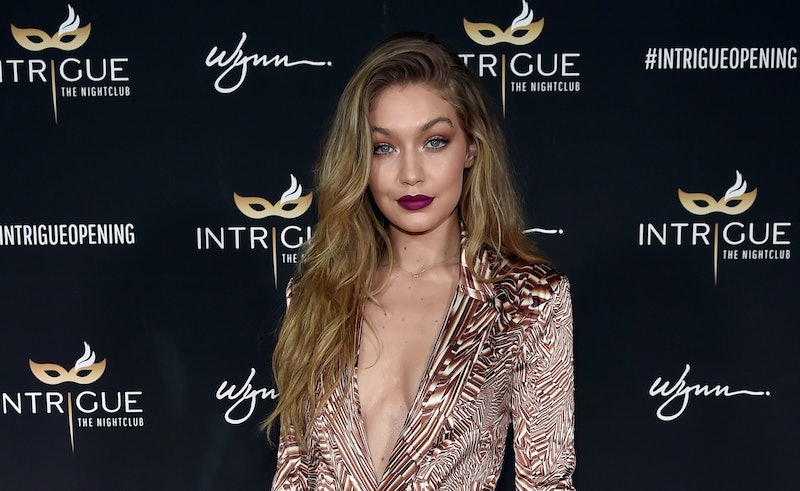 Lamentably, I've been guilty of dipping into the cliche that models are all about a pretty face. But Gigi Hadid thinks social media has taken away the "dumb model" stereotype, as she recently told Mashable. While it cannot be denied that the babes who grace our magazine covers and all the ads on glossy pages are drop dead gorgeous, that obviously doesn't mean that they don't have a whole heap of passions, quirks, and smarts — regardless of what sexist and antiquated tropes might have us believe.

In a recent interview with Mashable, Hadid shared, "We’ve just been given a gift as a generation of being able to show our own personality and have so much control over the person we are to the public, and not just being a face on a page." When I think about it, her words ring true. There are legions of models out there who we see almost on the daily — Kendall Jenner, Alexa Chung, Tess Holliday, Lineisy Montero Feliz — and as humans, it can be easy to jump to conclusions regarding what kind of people they are based on what we see laid out in front of us. They're all impossibly stylish, easily hop from country to country, attend the most lavish of parties, and show up to airports in heels. In other words, they're concerned with stereotypically "materialistic," "superficial" lifestyles.

But through social media, we can see another side of them: A more personal angle. In her interview with Mashable, Hadid added, "I think social media has taken the dumb model stereotype away."

Although this might be true, not everyone approves of the kind of celebrity certain models achieve through their Instagram legions. As The Inquisitr pointed out, "Renowned fashion designer [Calvin] Klein recently expressed [...] models are now paid for the number of followers that they have on social media, and not for the way they represent the designer and the label."

While those who have more followers might get more campaigns these days, this doesn't feel like the only reason so many models use social media to reach the public. As Hadid suggested, being able to showcase a more personal, three-dimensional side of oneself can remind the public that you're human, too. Hadid proves this herself whenever she posts an honest Instagram entry.

Hadid reminds people that she's just as human as anyone else; that negative words can affect her just as much as they would anyone else. By showing us that she's proud of her work, of her body, and of her goals, the one-dimensional and unnecessary "dumb model" stereotype is definitely shattered just a little bit more.