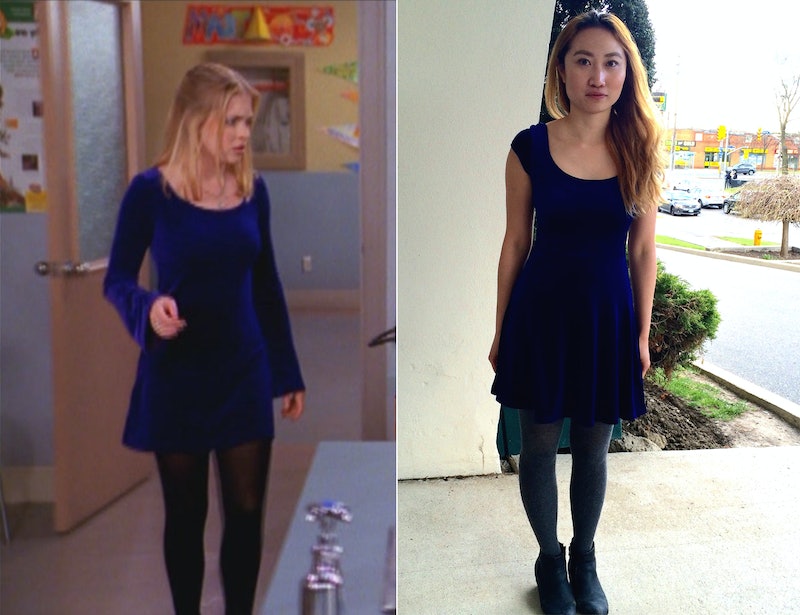 As a '90s kid, I will always remember looking forward to Friday afternoons. Not only because it was officially the weekend, but because ABC's TGIF would be on and boy was that good TV. Sabrina The Teenage Witch was always a staple, and if I'm going to be completely transparent here, I even read the books. You can definitely say I was a pretty big fan.

The show was funny, full of magic, and Sabrina could change outfits with a simple point of her finger. It was everything that my pre-teen heart desired. Plus, who could forget all those pop stars who made their special guest appearances? Shout-out to Britney Spears and *NSYNC.

The best thing about Sabrina's style was that it was easy to emulate. It was a down to earth aesthetic that girls and feminine people could rock without feeling like they were way too over-dressed for school. Sabrina's outfits were just at the heart of what '90s fashion truly was, so I wanted to try my hand at dressing like Sabrina The Teenage Witch herself for a week. I hoped to decipher whether I could feel as magical and slightly awkward as she was, while discovering whether I could pull off her outfits at my new job in the IT industry. With my attitude ready and my Sabrina The Teenage Witch outfits ready to go, this is what happened when I dressed like Sabrina Spellman for seven days.

On day one, I tried my hand at what appears to be Sabrina's go-to outfit: A tank top, cardigan, and dark pants. It's actually a very office-appropriate look, but one that I wouldn't really wear on a regular basis.

Anyway, I've recently started a new job at a cool IT company, so I was a curious to deduce whether this experiment would garner any interesting reactions. Unfortunately — perhaps because of the nature of the ensemble (aka it was super plain) — I didn't hear anything positive or negative. It was a very vanilla outfit for day one of this experiment.

For day two, I wanted to turn things up a notch. Sabrina wore a lot of printed tops during her high school years, so I chose to channel that look for my second day. I don't own a lot of patterned shirts, so I had to really improvise to get a top that looked similar to the GIF above.

The closest thing I could find to a printed top was an American Apparel dress from way back in the day. I figured I'd wear it out as a top and see if that in and of itself would get any reactions.

To be honest, it didn't. But I did tell a friend of mine that I was wearing a dress as a shirt and he began to tease me about it in the way that close friends do.

Out of all the days of this experiment, day three was definitely the occasion that garnered the most reactions. I sported something pretty similar to Sabrina's iconic blue velvet dress. This was the first time I had worn a dress at my new job, but I didn't think much of it. Maybe someone would comment on how dressed up I looked for the day, but that was all I could imagine.

Things actually spun into a whole lot of comments on the dress itself and how gorgeous the material looked, mostly from female coworkers. As for my male coworkers, I received a ton of compliments saying how pretty I looked. There were even a few comments from folks talking about how dressed up I was, as I'd assumed there would be. I'd say the majority of day three was full of praise for the ensemble — perhaps suggesting that wearing a dress is somehow perceived more favorably for women in professional environments than wearing black slacks might be.

Going into day four, I thought that I'd receive similar comments about looking a little more "dressed up" at work. Under this mindset, I walked into the office prepared to hear some remarks (be they good or bad) from coworkers. After all, I was sporting something other than pants again.

However, the only comments I received for the day were from two male coworkers who complimented me on the color of the top, noting that it looked really good and "gave the impression of glowing skin."

For day five, I knew I wanted to switch up the whole Sabrina look. I went for the episode in which she turns herself into a boy in order to understand them more and determine whether there was anything going on between Harvey and Valerie.

I didn't want to look too casual at work, so I swapped the blue flannel top for a solid blue one, black pants, and some sneakers to boot. This aesthetic was a bit more similar to my own personal day-off style, so I didn't think suspect I'd garner any sort of comment or reaction.

However, I did get a few compliments on my shoes: A pair of Nike Air Maxes. I am by no means a sneaker-head, but this particular pair stuck out to me and I guess it did to others as well.

As I mentioned before, Sabrina The Teenage Witch invited a lot of pop stars on the show, so I wanted to make sure that I recreated at least one outfit from those encounters. Of course, I chose the look in which Sabrina meets Britney Spears because duh: Pre-teen me was all about that.

I ran errands this day, but I didn't hear any reactions with the exception of my mom telling me that this pair of boyfriend jeans looks very raggedy. For the record, she also says this every single time sees me wearing them.

I wanted day seven to end with the classic late '90s to early 2000s fashion: the shrug. Remember those? Those cardigans that just ended in the middle of your back? Yeah, I still have one in my closet.

I chose a super early 2000s-esque outfit: A cropped cardigan/shrug, tank top, and three-quartered pants. This was another day of errands and I really thought I'd receive some strange looks from people for wearing the shrug at the grocery store. But no reactions came at all. The last day of this experiment ended on a flat note.

Dressing up like Sabrina The Teenage Witch was actually quite fun and reminiscent of what it was like to grow up in the '90s. Her outfits weren't too out of this world or ridiculous, so recreating them didn't ultimately stand out to people as, "O.M.G. that's the outfit from Sabrina The Teenage Witch." However, what I liked about her style was that it was something the average kid could emulate and not feel like they were peacocking at school.

Even though her clothes were pretty basic compared to other '90s icons, starting off a new job wearing styles reminiscent of the '90s made me a little hesitant. The truth is, presentation is all about self-confidence and just owning it.

Out of all of the outfits, it was the blue velvet dress that received the most reactions. Most female coworkers complimented the dress itself, saying how beautiful it was and how lovely the material appeared. It was a stark contrast to what my male coworkers said. Their praises were based on how I looked for the day, and not the dress itself. There were many comments of, "You look so pretty!" Or, with a semi-perplexed look atop some visages, "You're very dressed up today!"

Sporting Sabrina's iconic blue velvet dress was another reminder that when women wear something that is a little out of their "usual everyday style," people will often say something about it. Personally, I love dressing up (and down) and adore playing around with my aesthetic. That said, I'm definitely discovering that experimentation doesn't go unnoticed. This is especially true if I decide to wear a skirt or dress when someone is accustomed to seeing me in trousers. All in all, this was the look that felt the most eye-opening. While I don't think I'll necessarily be emulating Sabrina again, doing so was a fresh reminder that when one deviates from one's standard look, all eyes will be on you.