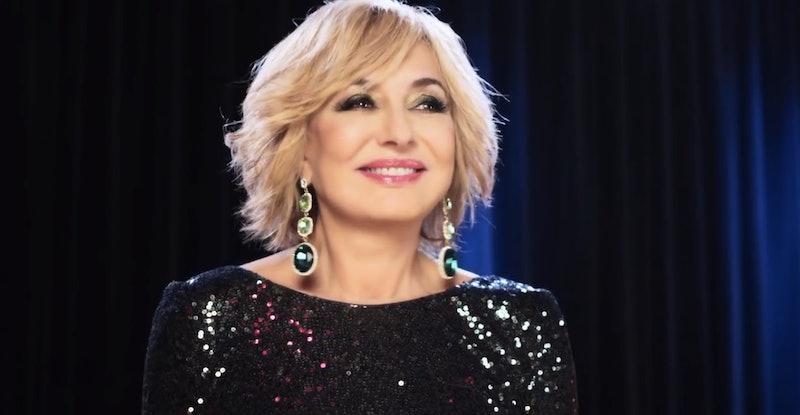 A new video from GooGoosh, Iran's queen of pop, is making waves, both within the country and abroad. A 64-year-old legend, Googoosh has just released a new music video that explicitly supports gay rights, making her the first prominent Iranian to speak out against homophobia. Predictably, the video is causing controversy.

"We knew from the start that because of its topic the video is going to be very controversial among Iranians," the video's director Navid Akhavan told the Guardian . "That's why we expected negative feedback too, but that hasn't bothered me, nor Googoosh." So far conservative websites and news outlets in Iran have denounced the video, calling it and Googoosh "anti-revolutionary" and saying the video promotes decadence and "hideous" acts. However, reaction from Iran's largely underground LGBT community has been very positive, as one might expect.

"The comments I have read online and the messages I have received from people within the Iranian LGBT community have brought tears to my eyes," Akhavan told The Guardian.

Googoosh, whose real name is Faegheh Atashin, has been an icon in Iran since before the 1979 Iranian Revolution and continues to be popular with Iranians across generations. After the revolution, she stayed in Iran and refused many offers to leave her home country even though she had been forced to stop singing, due to the ban on female performers. In 2000, however, she left Iran for the United States and resumed her career.

The new video shows a young couple played by Iranian actresses Pegah Ferydoni and Yasmine Azadi. The pair faces obstacles, but the song seems to suggest that they will ultimately triumph. The chorus translates into English as:

The end of this road is not clearI know this, just like you doDon't tell me to stop lovingYou can't do that and I can't eitherWe can't go back to where we wereAnd we can't find a way out of this dead-endI know (they say) these feelings should not be, but they are

The LGBT community in Iran faces extreme persecution. Though the new, more moderate president Hassan Rouhani has not used openly homophobic language like his predecessor, homosexuality remains an offense punishable by death under the country's Islamic Penal Code. So it is encouraging to many that a prominent Iranian has taken such a strong stand on the issue.

"We don't expect a massive change after this video but it has broken the silence of many Iranians," said Shadi Amin, a lesbian Iranian activist operating out of Germany. "Our research and experience shows that gays and lesbians in Iran, especially those in smaller cities, feel they are alone, think they are the only people to have such feelings on the planet, but Googoosh's video [shows] hey, you are not alone."

More like this
5 Ways To Help People Impacted By Hurricane Ian In Cuba & Florida
By Emma Carey
Two UK Cities Are Now In The Running To Host Eurovision 2023
By Sam Ramsden and Rachel Mantock
Chelsea Clinton On The Best Advice She Ever Got From Her Mom
By Brianna Kovan
Black History Month UK’s 2022 Theme Calls For Action, Not Words
By Maxine Harrison
Get Even More From Bustle — Sign Up For The Newsletter