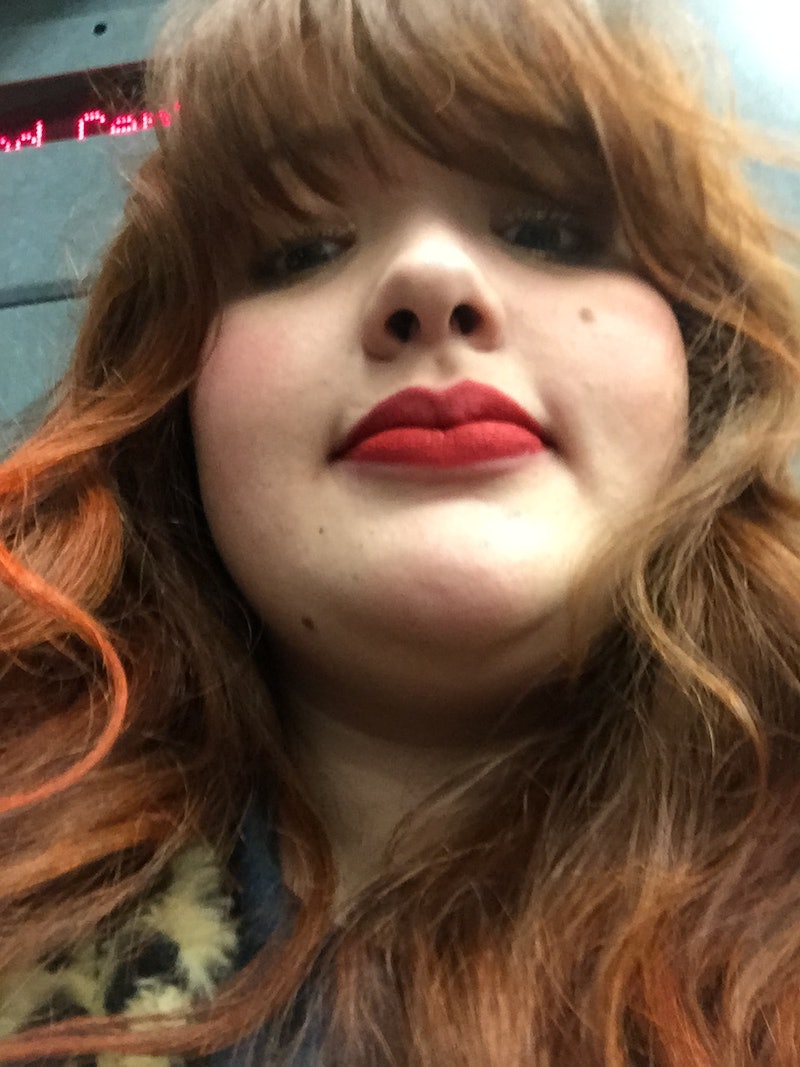 I love my double chin, but I didn't always. When I officially realized I no longer had a visible jawline around age 20, I took it as some kind of failure. Maybe the failure to remain a "good fatty," with curves in the "right" places and acceptable pockets of fat on the butt and thighs alone. Maybe the failure to maintain one of the few aspects of Eurocentric beauty standards my body naturally held onto for a long time. What I do know is that it seems possible for folks of all sizes to have double chins. In fact, having one appears to be more common than not.

Last holiday season, however, I was sent a press release by some folks who clearly had no idea they were reaching out to a proponent of fat acceptance. "Thanksgiving is a time to eat turkey, not look like a turkey. Get rid of that turkey-neck in time for the holiday," it began. I was about to send it straight to the trash folder when a little statistic caught my eye. "According to the American Society For Dermatologic Surgery, nearly 70 percent of Americans suffer from the dreaded double-chin," it continued.

So there is it. Almost three quarters of the American population "suffers" from this "dreaded" ailment. Not a life-threatening ailment, by any means. Just an aesthetic quality that most people have. Yet here we are: Being conditioned to believe a naturally-occurring characteristic is a problem to be fixed. It's exhausting, and it's unnecessary. So without further ado, here are some reasons to forget the scaremongering and love every chin you've got.

1. You're In The Majority

The truth is, almost everyone I've ever known has had at least a slight double chin that surfaces if ever they laugh or cry or take a selfie from a downwards angle. Thus is the nature of bodies that are, at least in some regards, made of malleable flesh.

2. Where Do You Even Draw The Line?

As we've established, the vast majority of people seem to have double chins. Much like the vast majority of women have, have had, or will have cellulite in their lifetimes. Approximately 98 percent of women have cellulite, in fact — something Dr. Cheryl Karcher, a New York-based aesthetic medicine expert and cellulite researcher, and Dr. David McDaniel, director of the Institute of Anti-Aging Research and Assistant Professor of Clinical Dermatology at Eastern Virginia Medical School, told AOL in 2013. As for the small two percent of women who might not get it, AOL reported that "Karcher says it's likely women with thicker skin."

This is the point we're at when it comes to beauty standards: We shame even the most natural of occurrences on the human body, like cellulite or double chins, for no rational reason. Most women have cellulite, most humans have double chins, yet we spend our hard-earned dollars on potions and surgeries to eradicate these things.

I'm not here to shame those who opt for surgery — to each their own. But the pressure itself put on individuals to fit into an airbrushed reality is too much. If we carry on in such a way, what will be next? The eradication of beauty marks? Veins? Toenails?

3. The Nibbling Possibilities Are Endless

I truly believe that we're so programmed to think any kind of fat is bad, unattractive, or all-around undesirable that we forget to take into account how fat can actually feel: Soft, gooey, and kind of sweet.

Personally, I love having my double chin nibbled and bitten. Forget standard neck hickies: Your second chin is very likely quite sensitive in the most tingling of ways if you allow yourself to feel as much.

There's also an element of taboo here: A naughty side of your personality might end up getting off on intimately embracing something you're told you should hate or fear.

Not to say that a solitary chin isn't rad, of course. But twice the chins, twice the fun, right? Consider your double chin just another sign of your individuality. It adds a sense of spice and intrigue to your face — setting it apart from any other visage in your vicinity. No two people's chins will ever be the same, and yours deserve to be celebrated.

Just look at the lovely Nancy Whittington-Coates of Sugar, Darling? as well as CEO and founder of Black Heart Creatives Charlotte Louise Curtis. Their lovely chins didn't stop either of them from having glorious wedding days. And these photos ring all the more beautiful because of the tangible confidence and love each babe exhibits for both themselves and their relationships.

Want more self-love inspiration? Check out the podcast below, and be sure to subscribe to The BodCast for more radical body positivity!

Beauty standards fluctuate from era to era; country to country. One moment, big Baywatch-esque boobs are the trait to have. The next, a more androgynous, waif-like chest is preferred. Keeping up with society's so-called rules for what we must look like is exhausting, and quite logically entirely unnecessary.

If beauty standards can change as soon as national borders are crossed, or historical times revisited, my gut instinct tells me that they must not be real. These "principles" are not set in stone, nor as they a requirement for a fulfilled life.

In fact, beauty is entirely subjective. It's why we are each attracted to different people; why we are each drawn to different sartorial options; why we each choose to maintain our bodies uniquely. But if we can recognize that the standards are nonsensical, then we can decide to try to actively move away from them. We can decide that the double chin is just one feature in a sea of features that makes up your glorious body.

I cannot help but feel that a lot of folks dread the double chin because they believe it to be a sign that they have gotten fat. This is, of course, ridiculous. Double chins are not size-specific. They do not only occur on bodies weighing 250 pounds or more. Need I remind you, 70 percent of Americans (of all sizes, I'm sure) get these babies.

But even if the dooble, as I like to call it, was exclusive to the fatties of the world, the stigma surrounding fatness is the real problem at play here. Fat is not synonymous with "ugly," or "un-sexy," or "unappealing," or even "unhealthy." It's just flesh, and some of us have more of it than others. But to only refer to fatness as something inherently bad is a surefire way to shame those who actually are fat. And IMO, we should all be working towards tolerance.

When Alysse Dalessandro, writer and designer at Ready To Stare, shared this photo with me, she wrote, "I love [my double chins] now because I remember for how long I didn't love it. It's important for me to take pictures from the side or not hide my double chin because there's nothing wrong with having one, it's a part of me and it's beautiful!"

When you embrace your double chin — much like embracing any part of your body that you've been told is flawed — it is a sign of tangible progress; of moving beyond rules that never should've existed in the first place. It's a sign that you're choosing to leave social brainwashing aside, in exchange for self-acceptance.

8. Hating Them Will Only Detract From Experiencing Things

When artist Kat of the Murder Of Goths blog sent me this image, she said she "used to hate this photo because of my chin. I couldn't see past it to the joy." Looking at it now, that's all I can see: A human who looks completely and irrevocably in-the-moment; a human who is experiencing the sort of happiness there needs to be more of in this oft-grim world.

Instead of worrying about how your double chin looks in a photo, or who can see it if you're sitting down in a certain way, my advice is to focus on living the experience you're having. A photo will always look more beautiful if the person in it looks to be enjoying this crazy existence.

I love coming across bloggers, celebrities, and models who rock their double chin unapologetically, and whose body types relate to my own. As Bustle's Georgina Jones always asks, how can you chastise your own appearance when you simply adore the appearance of someone else who kind of looks like you? If you think your favorite blogger's dooble is precious, I highly suggest applying the same kindness to yourself.

In a world that can sometimes feel like it runs on beauty standards, seeking out alternative imagery and a diverse media intake is one of the best ways to come to realize that those standards are excruciatingly boring. Surround yourself by folks who might better understand what it's like to live in your body, and you'll hopefully feel less like your body is a problem.

Plus size rocker babe Becci Atkinson tells me, "I'm still on a journey of self love with it and finally say to myself it's totally OK to have [a double chin]. I personally think there should be more representation of plus size woman in the industry who do have double chins; this would help so many other women including myself."

The truth is that when it comes to mainstream representation of plus size women in particular, certain imagery can often feel catered to the good fatty trope: The trope that dictates what is "acceptable" fat, and conditions us to believe that "excess" flesh is only OK in certain pockets of the body like the breasts, thighs, or booty.

In reality, bodies come in a myriad of shapes and proportions — and IRL, at least, the double chin is more common on plus size individuals than not. In a world that so often tries to shrink the fat beneath one's face, however, you can choose to offer an alternative, and more realistic, narrative.

11. They Aren't Harmful, But Poor Body Image Is

Your double chin can't kill you. It really can't. It poses no immediate risk to your life. It doesn't detract from your aesthetic allure. It won't lead to premature death.

What can harm us, however, are the effects of negative body image. The National Association Of Anorexia Nervosa And Associated Disorders reports that "over one-half of [American] teenage girls and nearly one-third of teenage boys use unhealthy weight control behaviors such as skipping meals, fasting, smoking cigarettes, vomiting, and taking laxatives." Additionally, 20 percent of those who suffer from anorexia will "prematurely die from complications related to their eating disorder, including suicide and heart problems."

Not everyone who hates their double chin has an eating disorder, of course. But eating disorders are one of many ways that unattainable and unneeded beauty standards affect many of us. The thought of developing a life-threatening disorder should arguably be far more frightening than some harmless fat under your face.

At the end of the day, there are just far better things to hate than an innocent double chin. The earth is chock-full of blatant and rampant discrimination, intolerance, a messed up food supply, nuclear weaponry, politicians who don't even try to conceal their racism. At least to me, all these issues seem a lot more alarming than the fatty bits on my face. The latter are only signs of character and personality: Uniquenesses to me and me alone. And if there's one thing that deserves celebration in this world, it's definitely our uniquenesses.

More like this
Isa Guha Is Taking The Lead
By Charlie Mock
Fermented Skin Care's Barrier-Boosting Benefits, Explained By Derms
By Audrey Noble
15 Hibiscus Tattoos That Bring Tropical Vibes To Your Body Art
By Paris Giles
Everything You Need To Know About Ephemeral Tattoos
By El Hunt
Get Even More From Bustle — Sign Up For The Newsletter