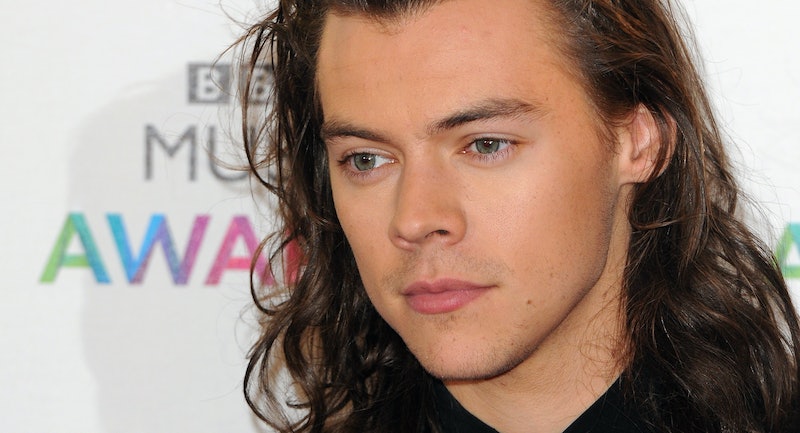 In breaking hair news, this British crooner has finally stepped out in public sans hat, giving fans a full-on glimpse at his new mane. Harry Styles revealed his short 'do and fans are naturally freaking out on Twitter. Unsurprisingly, people are going wild over the snap of Styles' new mane fully exposed, and they're quite honest and upfront about their feelings.

For what seems like the longest time, Styles was rocking a long, dreamy coiff. But just recently he posted a photo to Instagram of his chopped off pony tail. That, combined with the fact that he donated his locks to charity, had fans yearning for photos of the beloved Directioner with his new short cut. But alas, he kept us all waiting, only appearing once in public while wearing a hat. Finally we've gotten a look at his entire head, and it's everything fans could have wanted and more.

Styles' fan base is certainly known for some pretty amazing Tweets. But as you'll soon see, his new haircut has driven fans madder than ever. One glimpse at this photo should tell you exactly why.

Ahead you'll find some of the best Tweets about the reveal of Styles' haircut. Be prepared to laugh, cry, and feel some serious feels!

There was never a doubt in my mind that Styles would look just as handsome with short hair as he did with long locks. The photo of his new mane left fans speechless.

Others Are Awed By Love

How sweet are his fans?!

Not going to lie, I LOL'ed when I read these Tweets. The beauty of his new cut would keep me up at night, too!

Bring Back The Long Hair

Some fans expressed their disapproval.

But the majority of fans are totally about it. And let's be real, it only takes a glimpse at Styles to tell that the new short crop totally suits him and makes him even dreamier than before.

If you want entertainment, grab a cup of tea and your phone and watch these Tweets stream through. I guarantee you won't be disappointed!