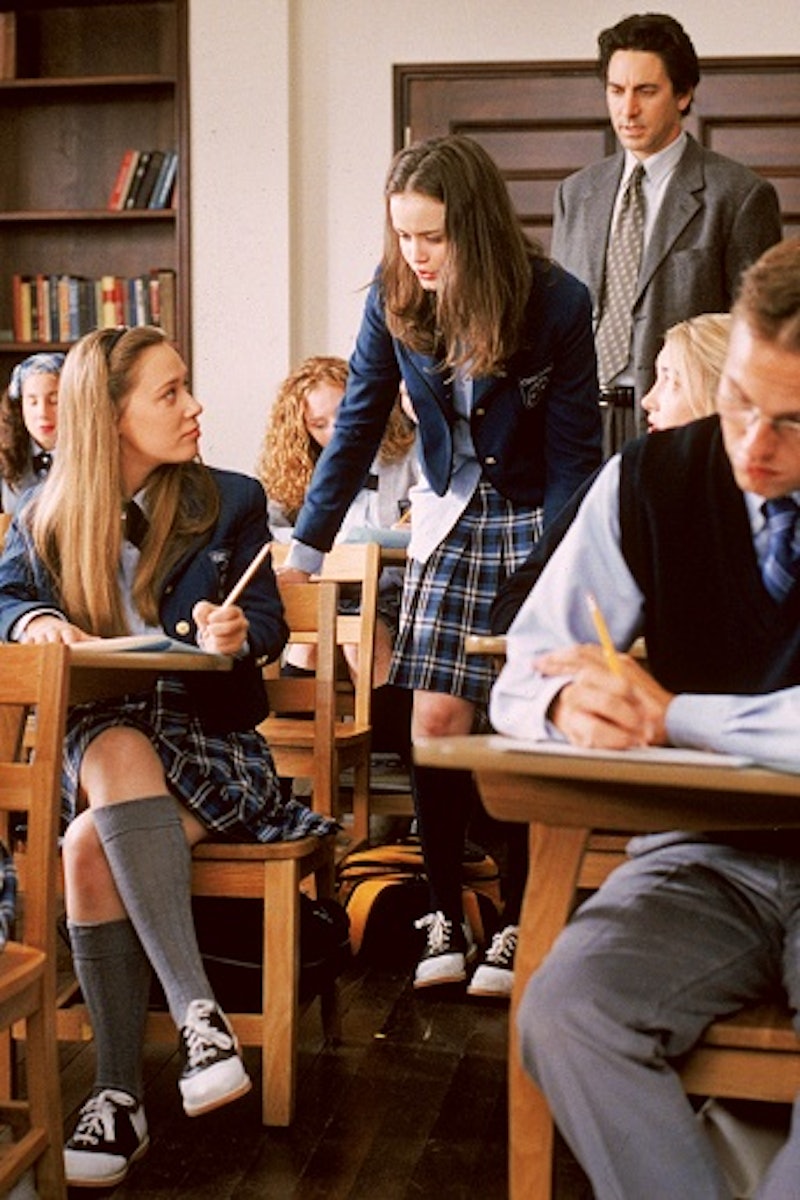 When you were car pooled to a private school every morning, there was something a little different you experienced than your public school friends: You had to stomach putting on a uniform every day. Having said that, there are certain things only early 2000s teens who wore school uniforms are likely to understand, from how to rebel under a strict system to how to change your look without changing much at all.

It took a particular amount of creativity and finesse to pull off a uniform year after year, mainly because not many people felt content with blending in with the rest of the crowd. But whether that meant you went wild with your hair or snuck in contraband jewelry underneath your sweaters and collars, chances are you found ways.

On top of the clever style tweaks, however, you'll probably also remember the early-2000s-specific trends you dabbled in. Whether they were velour tracksuits for after school activities or the bug-like sunnies you pulled out after the last period bell, I'm sure most early millennium uniform-wearers found ways to nail the fads. And we felt all the cooler for it.

Below are 11 things only early '00s teens who wore school uniforms will probably understand. If you went to a private school, some of these are bound to ring true.

When you don't have much differentiating you between the cool kids and the head-gear-wearing crowd, your shoes kind of matter. If you were unlucky like me and were stuck with no-brand gym shoes your mom pulled off the clearance rack, you unfortunately didn't get very far up the hierarchy.

2. The Length Of Your Skirt Said Things

If it was short and flirty, you could probably talk to a boy without looking like you just broke out in stress rashes. If it was below the knee and baggy, then chances were you didn't own Bath & Body Works body mists and were more interested getting bread sticks with friends after school than snogging in cars.

3. Your Head Gear Was Your Chance To Play

From headbands to intricate braids, the stuff you put in your hair offered you a small window to show off your personality. This kept things slightly fresh in a sea of monotony.

Rolling the waist band of a skirt to make it shorter took some skill and finesse — if you did it wrong, the hem would be asymmetrical and the nuns would call you out. Meanwhile, if you did it right, you lived another day without having the plaid sweep down to convent-like lengths.

5. The Purse You Wore Worked With Or Against You

All the cool girls in my school wore Coach bags — and no one outside of their elite circle was allowed to unless they wanted to be seen as a poser. But if you wore your mom's hand-me-down bags, well, you probably looked like a very stylish high schooler slash '90s businesswoman.

6. If You Were A Master Braider, You Were In

If you knew your way around a French braid, a Dutch braid, or had a knack with crown braids, you were pretty much guaranteed to become everyone's best friend. You better flex those fingers before coming to school, because you're about to be put to werk.

7. There Was No Life Without Cardigans

Considering the A.C. was cranked up to freezing during all seasons of the year, you needed your sweater to survive up to last period.

Whether you had a chunky Tiffany's bracelet on your wrist or a stack of jelly ones, your subtle pieces were how you rebelled against the strict school dress code.

9. You Never Forgot Your Shades At Home

Whether your friends could drive or you were waiting for your mom in the parking lot, once you spilled out of the building with the rest of the students, your shades went on. And depending where you fit in, your shades took a different shape: The cool girls wore those huge, bug-like glasses; the partiers had wrap-around shades; the fashion-oriented kids had Kanye-inspired shutter ones, while the floaters (those of us who didn't have a designated group) went with the classic rectangle-shaped, tea-tinted styles.

10. You Sometimes Carried Your Sweatpants To Change Into

Did you have an after school project, or planning on going straight to the mall after classes? Then you'd definitely have your velour tracksuit stashed in your locker to quickly change into.

11. Never Looking At Knee Socks Quite The Same Way

While they're a staple for Halloween and even some fashion looks, your knee-highs only remind you of never-ending history lectures and gym locker rooms. Forget. That.

From hair swag to quirky purses, those who had to wear uniforms in their teen years can likely agree: We would have done anything and everything to make our own mark on the boring dress code.