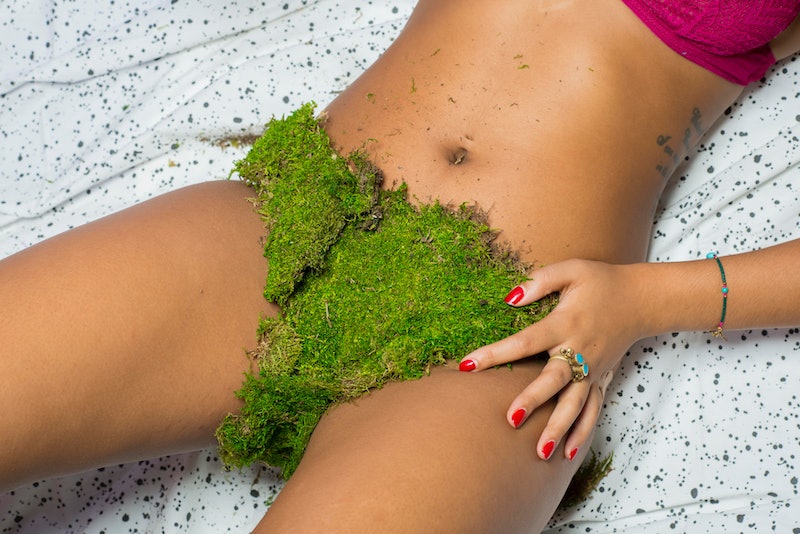 There are few things worse than letting a bikini wax grow in, especially in the summer. We all know we need to let the hair get long enough for our next wax to work (which usually means at least a week of un-groomed va-jay-jay) but It's uncomfortable and constantly leaves you worrying about whether or not you're sticking out the sides of your bathing suit. Still, you should never shave between bikini waxes, and I spoke with a bunch of experts to tell you why.

Every time you get into the shower during those in-between-waxing weeks of growth, it is endlessly tempting to pick up a razor and put yourself out of your misery (unless you're into letting it grow all out — then, by all means!). "It would be so much easier! And cheaper! And I would be in complete control of my hairlessness schedule!" you tell yourself, trying to justify the action you so badly want to take.

I spoke to specialists from some of the top waxing salons in New York City, and their collective resounding advice was "Do not shave!" It will totally mess up your hair growth and texture, and you will inevitably regret your decision when your stubble starts to grow in the next day.

Here are seven reasons why you should absolutely never shave in-between waxes. Now do yourself a favor and Put. The razor. Down.

1. It Totally Messes Up Your Schedule

Sticking to a strict schedule is important for achieving the best results from your wax. Most specialists advise waiting three to six weeks between treatments, or at least as long as it takes for the hair to lie flat on your skin (about 1/4 of an inch). "If you're off schedule then you're probably never getting a smooth wax result," says Melanie Gilliland, Chief Wax Expert and Educator at European Wax Center. Hair grows in separate cycles, so if you don't let it grow in completely some follicles may be too short to remove during the treatment because the wax can't grasp them the right way.

2. It Changes The Texture Of Your Hair

When you get a wax, your hair is pulled out from the root instead of cut sharply at the surface like it would be with a razor. This causes waxed hair to grow back softer than it would if it was shaved, says Shobha's Jennifer Pesce, which means that even while you let it grow in it won't be nearly as thick as it once was.

3. The Results Aren't As Permanent

According to Pesce, waxing provides smoother and longer lasting results than shaving does. With a wax, clients can expect to be totally hair-free for one to two weeks. Shaving, on the other hand, really only gives you a day or two before nasty stubble grows in and you have to whip out the razor again.

If you miss a few hairs here and there when you shave (which, let's be honest, you will) when you go in for your next waxing treatment, some hairs may not be long enough to be properly waxed and removed from the root. This can lead to stubble after a wax, and inevitably you'll have to let the hair grow out longer than usual to even things out.

5. It Can Cause Nasty Ingrown Hairs (Ouch!)

Ingrown hairs look gross, hurt like hell and are at risk of becoming infected. These can still happen after a wax, but are far more common when you shave (hello, razor burn). If this happens, Om Aroma & Co's Jess Arnaudin suggests applying an enzyme exfoliant to the area. She recommends Om Aroma & Co's Manuka Honey Detox Masque because it's hydrating and exfoliating, which can help to unplug those blocked follicles for clear skin!

The hair after you shave will be longer and thicker, which will inevitably take more time and effort to wax off. This isn't fun for either party involved (waxers don't like to yank at you and hurt you more than necessary!)

7. It Will Make Your Next Wax Hurt More

This alone is reason enough never to pickup a razor again.

If You Absolutely Need To Shave...

In case of an emergency hookup or surprise beach trip (in which case, I want your life), make sure you shave with the grain (in the same direction as the hair grows) rather than against it. Then, let your hair grow in a couple of weeks longer than you usually wait between services to allow everything to grow in. Pesce says using hair supplements, like what you would use on your head, may make the hair grow in faster. Once the follicles are long enough and everything appears even, get waxed then get back to your regular schedule.