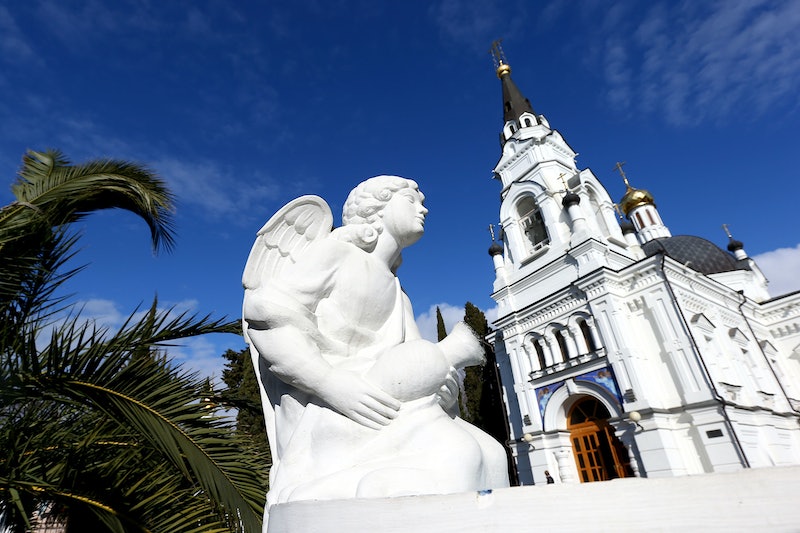 Like many 20-somethings, my boyfriend is in grad school. The unusual part? His grad school also happens to be a seminary. Yes, by the time he graduates, he'll be a card-carrying member of the clergy. To be specific, he'll be an ordained minister in the Presbyterian Church.

Before I met my boyfriend, my list of the acceptable careers paths for anyone vying for the position of 'love of my life' used to look like this:

If you had told me that I would eventually be in a committed relationship with a seminarian, I would have laughed at you. Before I met my boyfriend, you would have needed to pay a modest-to-large sum of money to get me to even set foot inside a church. And yet, here I am — a future minister's lady friend. Blame it on OkCupid. Or my boyfriend's face, which is damn cute. Blame it on everything except my childhood exposure to Catholicism.

As it turns out, it's actually pretty great dating a future minister. Seminarians are super intelligent and love having the kinds of deep, philosophical conversations that former liberal arts students like myself also happen to enjoy. It makes for some next-level pillow talk, let me tell you.

Otherwise, we have a relationship that's as normal as they come. Disappointingly normal, some might say. I mean, he doesn't even have to shower immediately after sex to wash off the sin, nor does he quote Scripture to random passerby.

But that doesn't stop people from asking a lot of intrusive questions about what it means to date someone who's so religious. Liberal Christians (they do exist, unlike unicorns) get a raw deal thanks to some particularly insane branches of Christianity. And so do their somewhat-secular girlfriends.

Here's a guide to the 10 most common reactions I get when I tell people "My boyfriend is going to be a minister."

Yes. He is going to be a priest. Our entire relationship is just a last ditch effort for him to get in as much sexy time as possible before taking that vow of celibacy.

2. Is that even allowed?

Usually followed by awkward laughter. Wink, wink, nudge, nudge. Excuse me, I thought all clergymen were sequestered from society in spartan towers, high above the temptations we mortals have to face! They can't have girlfriends!

This question is the dating equivalent of asking newlyweds when they are going to have a baby. It's basically just Do you have sex? thinly disguised as a slightly less forward question. It's none of your business.

But if it were your business: No, he is not "weird about sex," thank you very much.

4. Are you in seminary too?

Because of the specific nature of my boyfriend's career path, I'm often met with the assumption that I must be doing the exact same thing with my life. How else could I tolerate my partner's unusual life goals?

Thanks for your input. I'll definitely take it into account if I ever need to decide whether or not to become a preacher's wife.

Given that my absolute upper limit for potential children is two, my life will never look remotely like an episode of 7th Heaven. Sorry to disappoint.

7. Are you religious too?

Okay, this one is pretty legit.

8. Does he hate gay people?

If you have spent more than two minutes in a room with me, you should be able to tell that I can't even tolerate a conversation with someone homophobic, let alone date them. So, no, he absolutely does not.

This one really bugs me. Some people act like I'm a martyr for dating someone with an unconventional career path, for supporting him in the same way he supports my career by reading every single article I write.

I probably wouldn't be able to date someone in the military, but you don't see me sarcastically congratulating army wives.

Just kidding, no one ever asks this. But I wish they would, because what matters more than my boyfriend's chosen career path is the fact that we have a great time together. That would be true whether he was a minister, an underwear model, or — yes — a musician.

My boyfriend is religious. But he is also talented, hilarious, a great cook, and an integral part of my support system. And yes, we are happy. Thanks for asking.