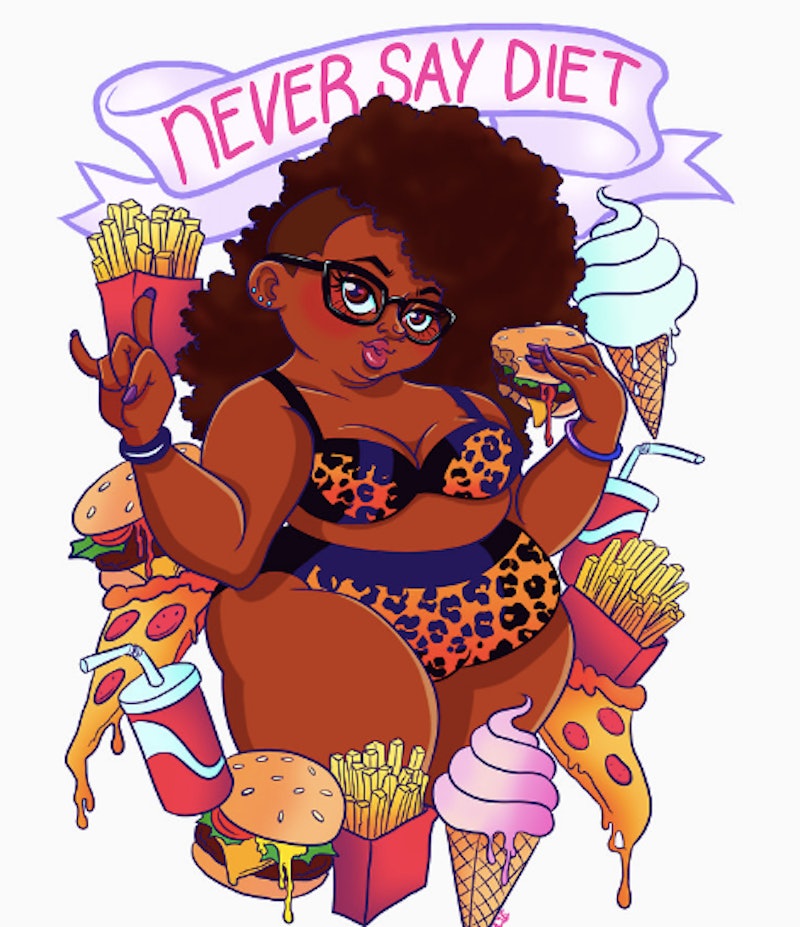 "The weight-loss industry is the most profitable failed industry in history, did you know that?" Although it comes from a fictional story, this particularly hard-hitting quote from Sarai Walker's novel Dietland sums up a certain fact many of us have likely heard IRL: the majority of diets fail. As David M. Garner, Ph. D, and Susan C. Wooley, Ph. D, famously wrote in the Clinical Psychology Review back in 1991, "There are two indisputable facts regarding dietary treatment of obesity. The first is that virtually all programs appear to be able to demonstrate moderate success in promoting at least some short-term weight loss. The second is that there is virtually no evidence that clinically significant weight loss can be maintained over the long-term by the vast majority of people.”

At one point in Walker's story, protagonist Plum muses, "Like all Baptists [members of an 800-calorie-a-day weight loss program], I'd been destined to fail, but I blamed myself when I did." It's a sentiment echoed through the lives of many IRL, and one that becomes particularly prevalent at this time of year: Right before scorching suns make days at the beach unavoidable, and vacation time is looming right on the horizon; right before layers are shed and swimsuits slipped on and mirrors questioned with the self-critique of, "Where is my bikini body?" Diet culture is ingrained year-round, but before summertime, it becomes inescapable. And that's why it's crucial to remember one thing: Diets don't work as a permanent "solution" to weight loss. But even if they did, diet culture isn't about you or me. It's not about your "failings." It's definitely not about your "flaws." It's just a business: A smart one, and a terrifying one.

Although diets are inevitably ineffective, this does not mean that the dieters themselves fail; it was never really up to them to "succeed." It was never really a matter of lacking self-control or exhibiting poor efforts in calorie-counting. It's more that dieting is a $60 billion industry in America alone — and, logically, the survival of the industry depends on human beings' so-called need for weight loss. If every diet worked — worked healthily, worked permanently — we would no longer need to turn to the same industry for help with our weight loss goals.

Although we should remember that diets themselves usually fail, however, it's also worth keeping in mind what they do very right: further inspire diet culture. When I think of "diet culture," there are several things that come to mind. As Co-Managing Editor of Everyday Feminism Melissa A. Fabello wrote for the online magazine, "The phrase 'diet culture' refers to a society that is so inundated with dieting propaganda, oftentimes imperceptibly, that it affects how we relate to ourselves and each other."

Diet culture is the sea of advertisements urging you to "change your body now" in order to acquire the solitary "beach body" or "bikini body" deemed socially acceptable. According to diet culture, the thought of all seven billion inhabitants of Earth residing in one sort of body type is not frightening, but aspirational.

Diet culture is the pressure to feel like a "good" or "bad" person depending on your daily caloric intake. It's the morality we apply to food, and the way we relate to the women around us by harping on our supposed flaws and must-fixes. It's the destructive sacrificing of mental health, while physical health is equally compromised. It's the failure to recognize that weight loss surgery can result in malnutrition, ulcers, anal leakage, obstructed breathing, and even death, while yo-yo dieting lowers one's immunities altogether. Diet culture operates under the assumption that to be fat is a far worse fate than any of those risks. It also operates under the assumption that anyone whose ribcage is not visible must be fat, and in need of repair.

This continued and universal quest for thinness and toned-ness leads to the sheer financial success of the weight-loss industry, and the sheer emotional and physical failures we thrust upon our bodies when we strive to adhere to the weight-loss industry. As nutrition professor, researcher, and advocate of Health At Every Size Dr. Linda Bacon wrote of the process of dieting for Everyday Feminism:

"Both dieting and weight cycling — that is, the process of going on a diet, losing weight, regaining the weight (and sometimes more), then going on another diet, losing weight, regaining the weight, and on and on and on — increase inflammation. And inflammation itself is actually a risk factor for many diseases that are typically blamed on 'obesity,' like diabetes and heart disease. And who do you think is more likely to have lived a life of constant dieting and weight cycling? People of size." She later added that "even the [Center For Disease Control And Prevention] reports that our day-to-day health behaviors, like diet and exercise, only account for less than a quarter of differences in health outcomes."

Many of us who've been on extreme diets in our lifetimes (be they ones we crafted for ourselves or 500 to 800-calorie meal plans our parents put us on in high school) likely know the feeling of self-inflicted starvation, and the guilt that comes from no longer being able to cope. Our metabolisms thrown for a loop, we oftentimes end up binging and/or regaining the weight through some other manner. We then blame ourselves.

While dieting itself can feel like an oppressive cultural tool, so too can the general mentality that comes with the hot summer months. With the increase in "bikini body" and "beach body" advertisements, the messaging that any physical form outside arbitrarily-dictated parameters is wrong permeates our daily commutes, the commercials in between our cable TV shows, our conversations with other women and feminine people, our choices at the supermarket, our desire to purchase cellulite creams and stretch mark repair serums, the pressure we feel to "tone." All of these things are spawned by the construct that only one body is good, attractive, healthy, and worthy of its humanity. But this is precisely why none of them are worth listening to.

There is no feasible way that every person in the world could ever look the same. Given that we are each individuals with unique gene pools, one-of-a-kind metabolic and digestive systems, different bone structures and builds, and taste buds unlike those of anyone else, our bodies are more or less destined to be our own. Yes, we can take steps to mold them into different shapes, sizes, and proportions — and it's our right to do so. But even if we strive to achieve an aesthetic as perfectly similar to that of the bikini body model on the subway billboard, chances are we will never look identical to that person. Aesthetic homogeneity is, quite simply, impossible.

Of course, it would be glorious if we could come to realize that fat itself isn't a bad word — but that would involve a revolution in everything from the healthcare system to education to media. So perhaps what needs to come first is some acknowledgment of the sheer absurdity of diet culture at this time of year in particular, which is so rooted in the construct of a universally desired body that it would be impossible for everyone to achieve.

Ultimately, diet culture is the personification of the so-called rule that says shrinking is the best hope individuals, and especially women, have at achieving a fulfilled life. Shrink your body. Shrink your problems. Shrink your brain. Shrink yourself. Diet culture doesn't want you to be a full person; not in shape, not in intellectuality, not in individuality, either.

It's a business rooted in making you feel like a failure. In reality, the only failure is that of a system meant to condition people to waste their time, if not the entirety of their lives, striving to look like someone else, so that they can then live their lives to the fullest. One of the many problems with this is that we're already living our lives, though. Or at least, we should be. Once you realize that, the point of diet culture can only become moot — the space it previously occupied in your mind and heart freed up to allow for all the living you have to do.

More like this
Isa Guha Is Taking The Lead
By Charlie Mock
15 Talc-Free Makeup Brands For Safer Eyeshadows, Powders, & More
By Audrey Noble
The Spiritual Meaning Of Angel Number 000, Explained
By Kristine Fellizar
It's A Pleasure #53: Help! My Boyfriend Won't Tell Me Why He Stopped Going Down On Me
By Sophia Benoit
Get Even More From Bustle — Sign Up For The Newsletter