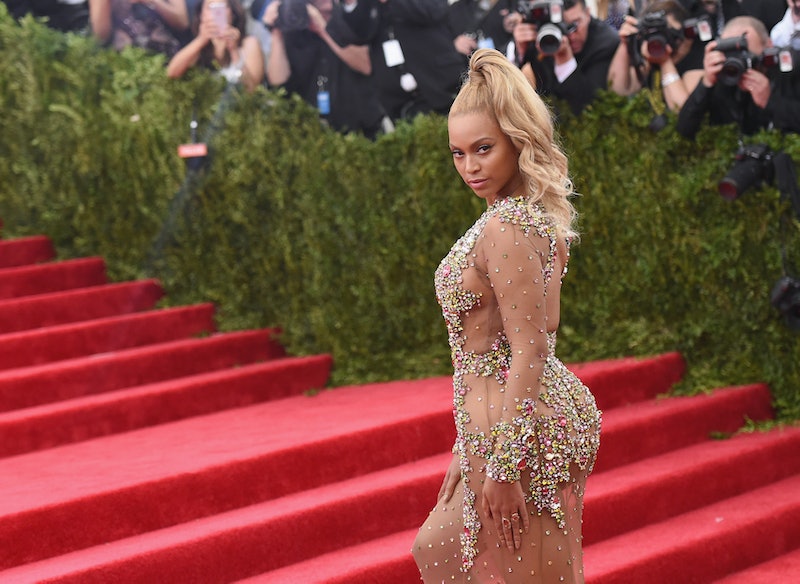 Remember Beyoncé's 2015 Met Gala dress? The sheer gown was a custom Givenchy creation, sprinkled with jewels and gems. Bey wore her long, golden locks in a genie-like side pony. It was a supremely unforgettable red carpet look. Beyonce's 2015 Met Gala dress was recreated by Missouri teen India Ross for prom, according to HelloGiggles, and it is just as stunning as the luxe original.

Ross, who is 18 and a budding fashionista, partnered with local designer Toi Hall, BuzzFeed reports. Together, they created an age-appropriate and gorgeous prom look inspired by Bey. That sort of ambition is what makes it so stunning. This is no arts and crafts project. This is serious fashion passion. Bustle has reached out to Ross for comment on her prom dress inspiration.

Ross, who plans to study fashion at college in the fall and eventually hopes to open her own boutique in St. Louis, according to BuzzFeed, seems to have used a less sheer, beige-hued material for the shell of the dress. Ultimately, Ross looked elegant and grown up. While she was copying Beyonce's look, right down to that high pony, she owned it. She is proof that you can take celeb style inspo and translate it effectively.

Observe Ross and her Internet-slaying dress.

It's lovely without being too see-through. It was probably the most unique dress at her prom.

Ross looks phenom and she looks like she knows it. These photos convey maj confidence, as they should.

Here's a final look at the source of Ross' inspo.

Clearly, Ross has a gift and she owned her Beyspiration. Here are 10 other Beyonce red carpet dresses from through the years that Ross could have totally replicated for prom. Or maybe she can tinker with these designs next time. She has the eye and the talent.

Beyonce's sheer, black Givenchy dress with a deep V in the front could be re-vamped for prom.

Beyonce seems to have two Met Gala "signatures" and they are Givenchy gowns that have a sheer element. Her 2012 gown, with the purple, dip-dyed hem, would avail itself of a prom level revamp.

Black is a fashion-y color that many may not associate with a youthful event like prom. But throw those rules out the window. If you're gonna go for it with Bey inspo for prom, then go for it. This lacy Proenza Schouler is "prommable."

This silver and ice blue confection is insanely prom appropriate.

The singer slayed this mint green, Armani Prive gown at the 2007 Oscars. It's simple with pretty embellishment and a budding designer like Ross could go to town during the recreation process and perhaps add her own modern flourishes?

This gilded, glittering Elie Saab column dress is another frock worthy of a prom translation. It's ladylike.

This long-sleeved and beaded Nicolas Jerban dress is deceptively simple. It's so flattering and I'd love to see a creative teen like Ross get her hands on it.

Silver sparkle! This thin strapped silver gown, which Beyonce rocked at the 2005 MTV VMAs, is way deserving of a prom edit.

This maroon, clingy and curve-hugging Zuhair Murad dress in a column shape is unique. Ross didn't play it safe in replicating the 2015 Met Gala look. Therefore, this dress would be a daring choice to "promify" because it's somewhat simple and not too, too frilly, which prom frocks can often be!

At the 2007 American Music Awards, Beyonce poured her curves into a golden, strapless, fishtail frock. I bet Ross could totally have her way with this mermaid design, too.