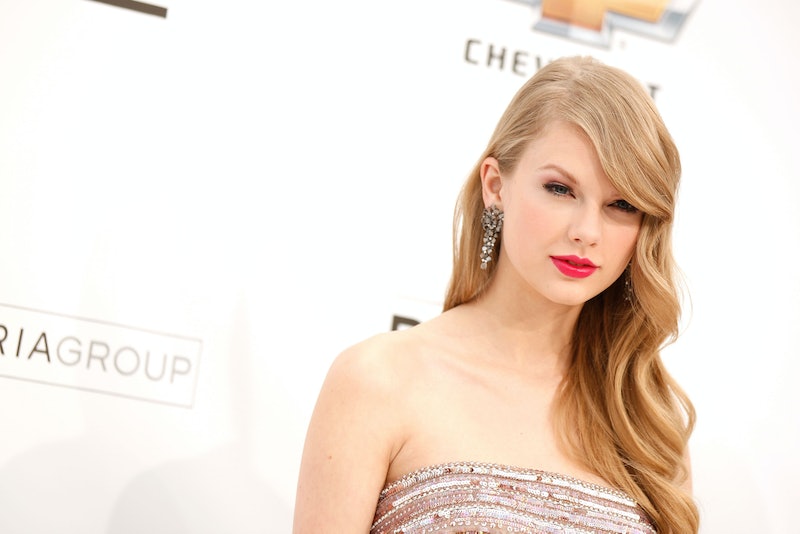 Although Swift had previously won the Female Artist Of The Year award from the Billboard's in 2009, the ceremony was on hiatus between 2007 and 2011 — so we never got to see a younger incarnation of T. Swift at the BMAs. Thus, 2011 was the first year the Swizz was ever seen on the Billboard Music Awards red carpet. And her look was so classic Taylor Swift that it could've fit in anywhere on her earlier 2000s timeline — especially the "Love Story" days.

With side-swept long blonde hair, this was the period between the tight curls and long bob that some fans may have already forgotten Swift rocked. But the elegance and beauty of this look perfectly matched the long, crystal earrings and floor-length, strapless gold and glitter gown that would help mark the beginning of Swift's addiction to sparkle in the next few years. And yes, that "red lip classic thing" that we like did make an appearance for the musician's first BMAs appearance, too.

Looking distinctly more like the adorable Swift of yesteryear, the singer seemed to exude natural charm in a way that would gain her the "America's sweetheart" label for the longest time. This was truly a classic ensemble for a classic kind of girl, but I for one am glad that some of Swift's signature looks can still be seen in her stylistic choices five years later. Red lips and sparkles are owned by the 26-year-old, and there's nothing anyone can do to stop that.

Hopefully we will see more gold glitter and red lips from Swift in 2016, but with a marked change in her style as of late — I mean, is Taylor Swift a goth now? — no one can know what the newly platinum blonde is going to bring to the red carpet this year. But I'm willing to bet she'll do us just fine.