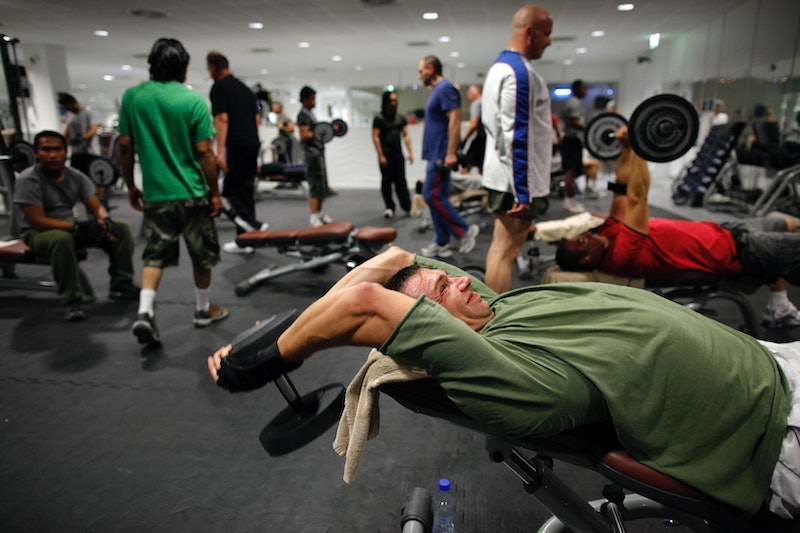 It's no surprise that it's easier for men to lose weight. And while I am a person who doesn't care that much about weight loss and who thinks our culture's obsession with thinness is unhealthy, it's still undeniable that women are under the most pressure to be thin. So the fact that it's actually easier for guys to drop some pounds is just unfair. BUT, it appears that their accelerated weight loss may just be at first — things even out later on.

Apparently, men generally have more lean muscle, which burns more calories, even at rest. Which not only makes it harder for them to gain weight, it also means that when men cut calories, they lose more weight than women for the same reduction. Also, men tend to lose weight right where people most want to shave it off, in the belly. Studies suggest these advantages are mostly short term — after six months of similar diet and exercise regimens, men and women tend to see similar weight loss results. But it's still unfair.

Women do have a few advantages. Women tend to carry more weight in their hips and thighs (can anyone say pear shape?), which is healthier than carrying weight in your belly the way men tend to. Women's fat deposits are more spread out, which is bad for losing weight quickly, but good for more important things, like avoiding heart disease. So there's that.

But women's bodies are also designed to have more fat naturally, presumably because it's an evolutionary advantage during pregnancy. On average, women have six to 11 percent more body fat than men, though because of the way its distributed, that doesn't mean we appear 11 percent fatter. And estrogen actually helps keep that weight on, whereas testosterone help keep it off. So thanks, evolution. You're a real peach.

But seriously, given all of this, it's a little ridiculous that female weight is so stigmatized. I mean, the female body is biologically programmed to have more body fat. Our actual hormones keep it that way. So if women are naturally supposed to have more fat, and if our bodies hang onto it for longer, even after starting diet and exercise regimens, then why exactly are fat women somehow more objectionable than fat men?

Because don't get me wrong, I know that fat shaming affects both genders, that men are also under pressure to be thin, and that body image issues are not exclusive to women. But for women, society has decided that our worth is tied to our looks, and our looks should not be fat. Even though it runs counter to all biological sense.

Thank you, sexism for deciding that even though female bodies are designed to keep weight on and not off, that it's somehow awful if women are fat.

More like this
Megan Rapinoe's Relaxation Hack Is Super Dreamy
By Carolyn Steber
This Psychological Effect Might Be Keeping You From Hitting Your Goals
By Lexi Inks
How To Politely Reject Someone Who Keeps Asking You Out
By Laken Howard and Lexi Inks
Help! I'm Not Getting Any Attention On Dating Apps. What Can I Do?
By Sophia Benoit
Get Even More From Bustle — Sign Up For The Newsletter