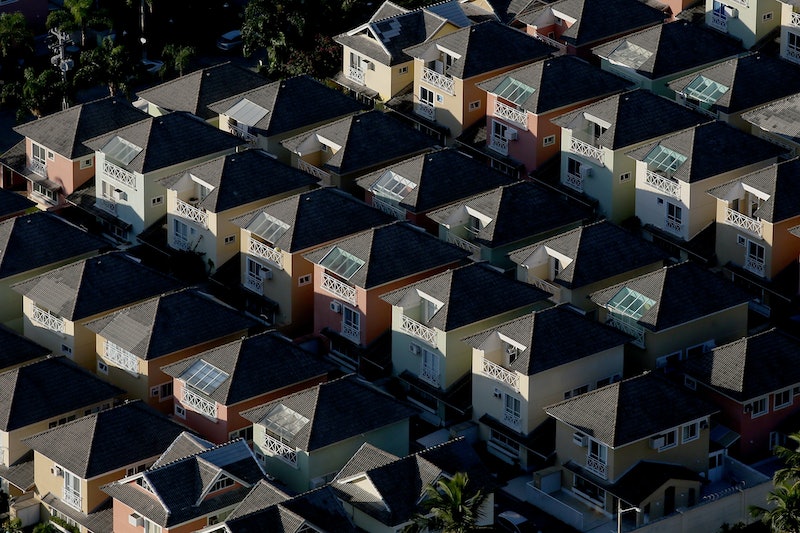 This past summer, I moved to the suburbs. And not only that: I did it because I wanted to, in order to be with a man.

Before you judge me, it’s not as simple as it sounds.

Not going to lie: It’s been an adjustment getting used to a small town in southern New Jersey. The community is extremely homogenous; there’s not much to do; and there's a frightening dearth of Seamless options.

My SO and I have been together for nearly five years. That’s a record for both of us as far as relationships go, and though we haven’t started talking marriage yet — as I’ve written about before, neither one of us is in a rush to get to the altar — we have talked about the fact that we’re both in it for the long haul.

We met online (OKCupid, if you're curious), and for the first four years, we had what might best be described as a "mid-distance relationship." We didn’t live far enough away to have to, y’know, fly to see each other, but we also didn’t live close enough for one of us to be able to spend the night at the other’s place without bringing at least one change of clothes.

I lived in Brooklyn when we met, while he was located in southern New Jersey. It was an hour and a half’s bus ride away from New York’s Port Authority bus terminal. When you factor in the transportation time to and from the bus terminal on either end, the trip took two and a half hours — provided traffic wasn’t too bad. A roundtrip bus ticket cost about $40. It started to add up.

The distance thing wears you down after a while, even if the distance itself isn’t as bad as it could be. You have to plan each and every time you’re going to see each other — especially if you both have weird work schedules, which we did when we met — and you can go weeks or even months without being able to visit. And even when you do get the chance to see each other, you can’t help but feel that there’s a clock ticking down until the time when you’ll have to say goodbye, possibly for a significant amount of time.

So in June, just as we hit the four-year mark and after a lot of consideration, I jettisoned some of my things, packed up the rest, and got ready to move back to the 'burbs.

When it came down to it, it was a matter of practicality. One of the advantages of being a writer and editor is that you can do your job from pretty much anywhere; I’ve been working from home for three years now. My SO, on the other hand, can’t just up and move. As an engineer, he’s got the kind of job that’s becoming increasingly rare: A steady (and high) salary; benefits; 401K — the works.

Could he have looked for jobs in the city? Probably, and part of me wishes he had. Ultimately, it came down to the fact that while I could keep doing my job from where he was located, he couldn’t keep doing his from where I was.

And to be fair, he’s made his share of sacrifices as well. A native Californian, he moved to the East Coast for a job after college, never intending to stay more than a year or two. We had been dating for roughly a year when he asked me whether I’d be willing to move to California with him. Initially I said yes — but then later, I had a panic attack.

“My whole life has been here since I was 18,” I told him. “I just don’t think I can leave it yet.” He told me it was okay, and that we could stay put. Four years later, he’s still here, and we’re still together. He was willing to stick around for me then, and this time, I was ready to do it.

Not going to lie: It’s been an adjustment getting used to a small town in southern New Jersey. The community is extremely homogenous; there’s not much to do; and there's a frightening dearth of Seamless options.

But the bigger issue is this: How do you reconcile being a card-carrying feminist with giving up a lot of the things you always thought you wanted in order to move to the ‘burbs … for a guy?

Leaving New York meant letting go of a lot of things: It meant not being able to walk everywhere anymore. It meant saying goodbye to my favorite ramen place. It meant giving up the cachet that comes with saying you live in New York. It meant not being a New Yorker when you’ve spent over a third of your life as one. It meant rethinking where my career was going. It meant moving away from most of my friends.

As someone who’s always been a high achiever, it sometimes feels like letting go of all these things means that I’ve somehow failed. But failed to do what? What I’ve had to accept is that letting go doesn’t necessarily equal failure, or even that I’ve “given up.” It just means that my life ended up taking a different direction than I thought it would — and that happens.

The truth is, I’m happier living at a slower pace. I sleep easier without the constant sound of traffic outside my bedroom window. There’s a nature trail literally right outside my door, so I can take a walk in the woods whenever I feel like it. I get to keep doing a job I love, and I get to save more of my earnings from it, too. And perhaps most importantly, I don’t have to keep shuttling back and forth, feeling like my life is split in two.

We don’t have to schedule our relationship anymore. We get to have dinner together every night and talk about our days face to face, rather than through a computer screen. We can have spontaneous date nights in the middle of the week.

Sometimes, it’s even simpler: I’ll be curled up on the couch with a book, and he’ll swoop over and surprise me with a kiss, just because he can.