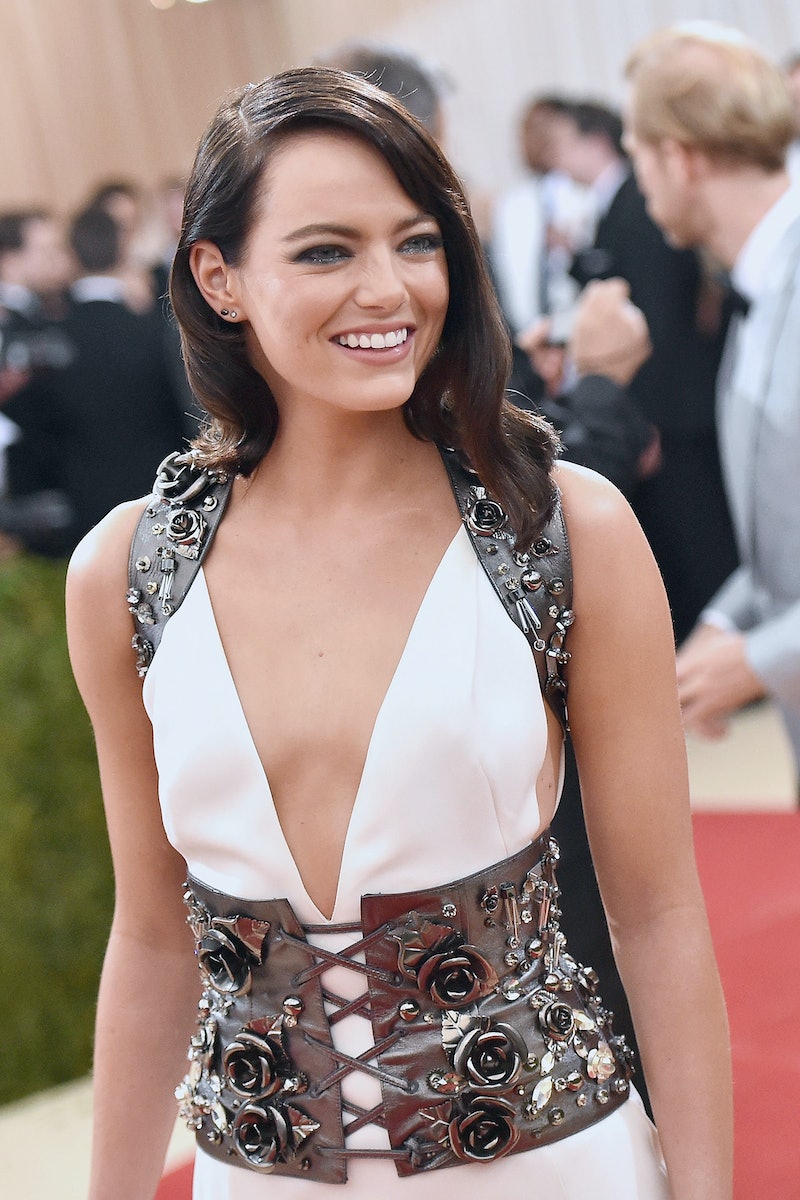 While changing one's hairstyle isn't a new or shocking idea, Emma Stone dyed her hair platinum and it was a total surprise, People reported. Just a month prior, Stone dyed her signature red hair into a rich brown shade and cut a sweep of fringe across her lob, so it was news to see that she changed her style yet again. Going from a dark brown hue to a vibrant platinum is no easy feat, and trading in her usually sleek, minimalist hairstyles for a choppy shag was super on-trend. So the question now is, why did Emma Stone dye her hair so quickly? She enjoyed her dark locks for less than a month only, and instead traded them in for the whitest blonde possible.

While nothing has yet been confirmed, it could be for a handful of reasons. Although the actor might have done it to jump aboard the shagalicious, '70s-inspired bob trend — one that has been making its way across the scene through celebs like Taylor Swift — the real reason could always be down to a role.

As Just Jared pointed out, this wouldn't be the first time Stone changed her hair for a movie. Just Jared reported, "She briefly went blonde in 2011 for role as Gwen Stacy in The Amazing Spider-Man before returning to her famous red hue."

So what does she have in the works now that might have her flip from brown to blonde? According to E! News, "Stone is currently filming the movie Battle Of The Sexes, in which she sports a brown wig with bangs. She is also set to film the Netflix series Maniac, which will be directed by True Detective's Cary Fukunaga."

Although she's donning a brown wig for her movie role, her mane might have a connection to her comedy series. Variety explained that Maniac is a dark comedy about two patients locked up in an institution, but there's been no mention as to whether one of them had to have platinum hair to flesh out the character.

Lastly, Stone is also starring as a young Cruella de Vil in Disney's upcoming Cruella , E! reported, who, as we know, is famously half blonde and half brunette. Perhaps de Vil was a pure blonde in the past, and Stone went deep into character and copied the look.

While this is just speculation at this point, one thing can't be denied: Whatever the reason, Stone looks fab in her new, drastic look.